I finally got the longed for invite to Grazing by Mark Greenaway, who has moved into Edinburgh’s Waldorf Astoria hotel, taking over the space which previously housed the Galvin brothers’ Brasserie de Luxe.

I’d been along to the launch in April but had somehow managed to miss most of the food, apart from the shiitake mushrooms on toast and the last ramekin of Shepherd’s Pie, which I had to share anyway – so I wasn’t completely sure what it was all about. 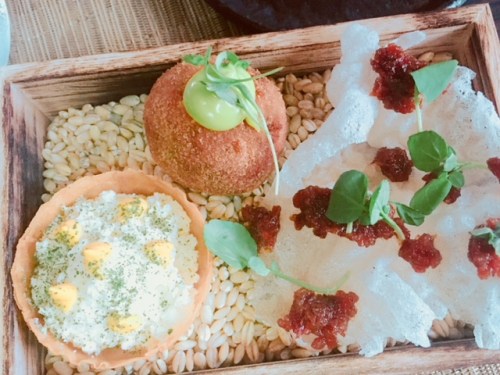 The decor’s similar to its previous owners, with dark wood and is spread over two interlocking dining areas but there’s nothing in particular to decipher it from what it was previously.

So I’m guessing that it will be the food that Greenaway will be adding his own stamp to that will mark it out from its previous occupants.  I’d never actually graced his previous restaurants, Bistro Modern in Stockbridge and more recently, his eponymous restaurant, Mark Greenaway on North Charlotte Street, (although Greenaway corrects me that this was actually the forerunner to Bistro Modern) but I’d heard good things. 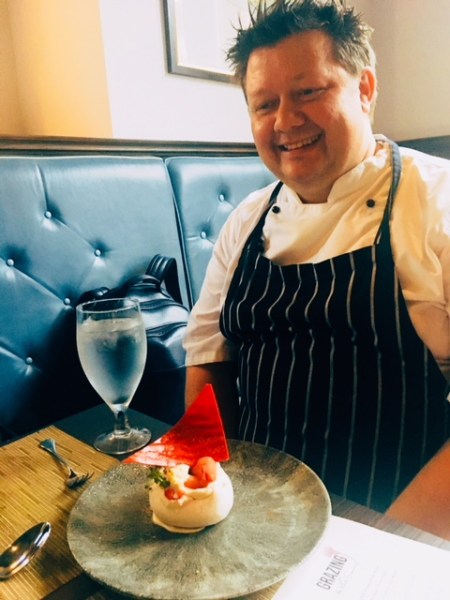 At the launch, I’d taken away a copy of the menu, which had some delicious sounding dishes but whose ingredients would have you guessing as to the final look and composition of the dish.

Choose your dining partner/s with care

There seems to be a trend towards small ,sharing plates in Edinburgh’s restaurants, which means a need to choose your dining partners well.  Otherwise, you run the risk of 1) not getting your fair share of the dish 2) ordering a couple of portions of the same dish to ensure you get your fair share 3) having eyes bigger than your belly and ordering a number of the dishes because they all sound so tempting – meaning your evening ends up costing a lot more than you bargained for, especially when you throw drinks and wine (£25) into the equation.

There’s also a grazing menu for two consisting of a starter, main course, and dessert. If you chose the most expensive options from each course, (being the BBQ Shiitake mushrooms on toast, with truffle butter; Cote de Boeuf; Baked Alaska), it would set you back £52.50 each, without wine. Again, this concept relies on you choosing your dining partner carefully and both being on the same page and wanting to eat the same thing- and there being only two of you!

Anyway choosing my dining partners carefully wasn’t an issue on the night in question. Myself and a small group of other ‘influencers’ had been invited to try the new relaxed dining concept, showcasing Greenaway’s mix of traditional, modern and sharing plates, before Mark would join us for dessert and coffee. We would have the chance to ask him anything…well almost. We even had a tour of the kitchen to see his dedicated team diligently creating the dishes that had wowed us.

There’s no doubting his passion for incorporating locally sourced ingredients and working with local producers to showcase the best Scotland has to offer.

Mark doesn’t take it for granted that all his clients are ‘well-heeled’.  He is under no illusion that many of his clientele will have saved up for an evening of dining at his restaurant for a treat and that what him and his team need to ensure is that his customers go away with them having evoked flavour and taste memories and an experience that will have returning.

Our evening was anything but grazing

What I experienced was anything but grazing, a verb meaning to eat small portions of food, as appetizers or the like, in place of a full-sized meal but boy, what an experience. I felt akin to the ceremonial pig being fattened up.

The menu reflects the laid back grazing concept

We were presented with the menu as we tucked into the delicious, still-warm treacle and stout sour dough bread, with duck skin butter and were excited by the forth coming offerings. We all somewhat regretted gorging on the bread as we realised that we weren’t to choose one dish from each offering but were to work our way through everything!  I have a healthy appetite but for once, even I was struggling.

We started with three of the snacks (£2.50) – my favourite was a melting tartlet filled with carrot and smoked potato mousse; haggis, apple, thyme and parsley bon bons, which were as crispy and appealing; and precisely cut white egg shells, filled with smoked salmon mousse. As I couldn’t have the latter, I was treated to a Not Prawn Cracker with Bacon Jam, which melted as these delicacies have a tendency to do. 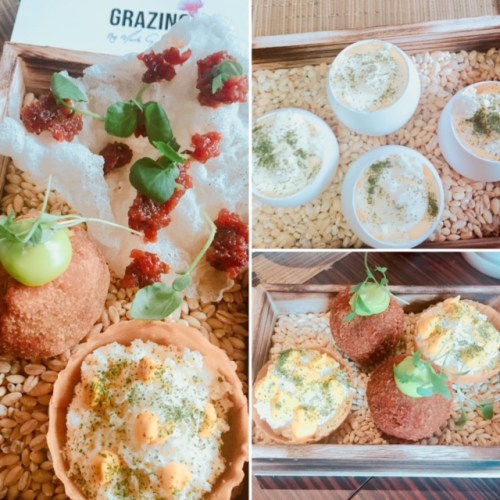 The theatre of Shiitake mushrooms

We then had the BBQ Shiitake mushrooms on toast with truffle butter, which feature as part of the ‘Grazing’ menu.  These beautiful creations are presented at the table with your own nail scissors and tweezers, wtih the need for you to skillfully cut your own requirements.  The truffle butter is divine and at one point, there was silence as this bunch of delighted bloggers savoured the flavours. 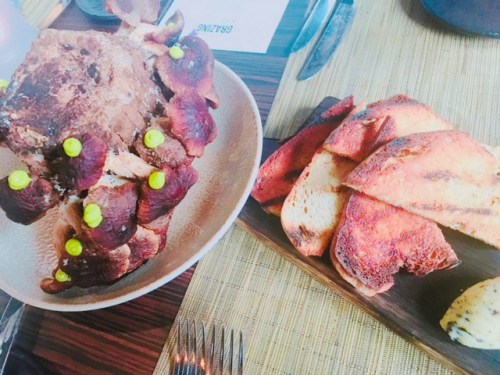 BBQ Shiitake Mushrooms with toast and to die for truffle butter

The main courses from the Big Plates part of the menu, consisted of a hearty Shepherd’s Pie/Potato Mousse/Spinach – which was over salted for my liking but still moreish with a rich gravy enveloping the lamb; a half-jointed roast chicken with natural juices with a beautiful, crispy skin, with a proper gravy that had the consistency and colour of chocolate sauce; Kentucky Fried Cauliflower with Garlic Aioli – yum yum ; a creamy, buttery Potato Mousse / Sticky Lamb Fat, which comes as close to comfort food as you can get and which I tried to convince didn’t have an ounce of butter in it but which couldn’t be further from the truth; and Ugly Potatoes with Gruyere, Thyme and Garlic – another perfect accompaniment to the chicken. 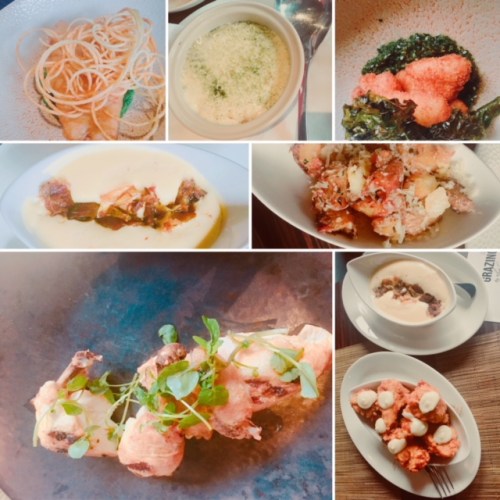 The other diners were also treated to Fish/Chips/Peas, which everyone declared ‘just perfect’; and Crispy Cod’s Cheeks.

Save room for desserts – the souffle is a masterpiece

Somehow we managed to find room for desserts but I’m not sure we did them justice. There was a half chocolate doughnut, with white and dark chocolate mousse and cinnamon, which erred on the dry side; a perfect, light strawberry pavlova with a dehydrated strawberry tuille; and what would have been my father’s choice, a treacle tart (without the pastry), a macaroon, served with rum & raisin ice-cream.

By far the star of the show, and which Mark tells us most tables will order one of, is the Sticky Toffee Pudding Souffle, which sat proudly tall for at least 3-4 minutes, whilst the social media photos were taken. 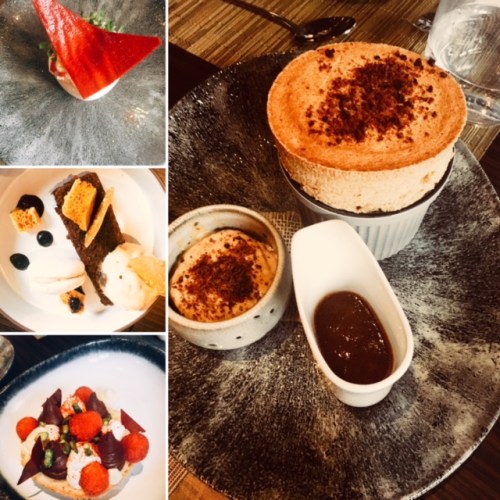 Grazing by Mark Greenaway – Desserts – save room for the souffle

This takes 15 minutes but it’s worth the wait and the perfect excuse for your mains to digest. Make sure at least one of your table orders this, and be prepared to share, as it was quite the masterpiece – the theatre of pouring the toffee sauce is just a pleasure in itself.

Grazing by Mark Greenaway is good, honest food, lovingly and imaginatively prepared by a great team that showcases the best of Scottish produce. Whilst an evening here won’t be the cheapest, it’s worth saving up for a special occasion.

I’m quite looking forward to returning for Grazing on Sundays, where they serve a roast for two of chicken or beef (£28), with all the trimmings.  I’ll just have to make sure I choose my partner well and ensure we’re both the same page.

Grazing by Mark Greenaway is open seven days a week for lunch and dinner and situated on the ground floor of the hotel with access from Peacock Alley and Rutland Street.

Kerry dined as a guest of Grazing by Mark Greenaway