Five years ago, working on a temporary contract for a public sector organisation near the Gyle, I used to take lunchtime walks to get my cultural fix at the Royal Bank of Scotland building nearby where the Wealth of Nations Sculpture by Eduardo Paolozzi sits.  Closer to home now, I also have the Manuscript of Monte Cassino sculpture, which is housed temporarily on Hillside Place, while its previous base outside St Mary’s Cathedral is being redeveloped as part of the new St James Centre.

I have to admit though, it’s some time since I visited Paolozzi’s other sculpture, the 24ft high Vulcan sculpture housed at the Scottish National Gallery of Modern Art but the reopening of the former Cafe Modern Two, now known as Paolozzi’s Kitchen was the perfect excuse to reignite my passion for this Edinburgh born artist. I took the opportunity to catch up with Diana of Wine Events Scotland over lunch.   We were seated under this magnificent sculpture and it really is awe-inspiring. In partnership with the gallery, Heritage Portfolio has worked closely to develop a striking new look for the cafe, with the interiors and menu both inspired by one of Scotland’s most acclaimed artist, Eduardo Paolozzi, who was recognised for his contribution to Pop Art and has a permanent exhibition at Modern Two.

Of Italian descent, Paolozzi was born in Leith near Edinburgh. He studied in Edinburgh and London and spent two years in Paris from 1947, where he produced enigmatic, bronze sculptures reminiscent of those by Giacometti.

Paolozzi’s Kitchen aims to create a fusion between culture and food, bringing together Eduardo’s heritage with a quirky, Scottish twist. The menu features a variety of Italian influenced dishes, and sharing plates created with locally sourced produce providing a dining experience with a cultural backdrop – just perfect for this ‘culture-vulture’. Some of the hero dishes from the new menu include haggis lasagne, slow-cooked venison ragu and panettone bread and butter pudding but there’s a little too much polenta for my liking.

My dining partner and I shared the warming carrot and fennel soup, with a homemade cheese and Arran mustard scone, which were just as the perfect scone should be – unlike the sweet American cream scone, a Diana Henry recipe I had made that morning and which had been a complete disaster (I think the recipe might have too much baking powder in it!).   Paolozzi’s Kitchen scones were perfectly risen with a good tang of cheese (although I couldn’t detect the mustard), which complemented the thick carrot soup. 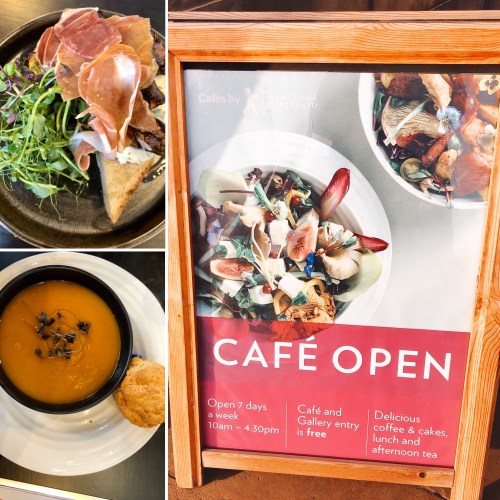 We also shared a bruschetta which were served on toasted sour dough. Traditionally, bruschetta are an antipasto from Italy consisting of grilled bread rubbed with garlic and topped with olive oil and salt. Variations may include toppings of tomato, vegetables, beans, cured meat, or cheese.

We chose a marriage made in heaven – the whipped ricotta, honey braised fig, crispy rosemary and although they promised rocket, it had been substituted with pea shoots, which have a nasty habit of tickling your throat on the way down.   Just as I commented on this, my dining partner, let out a ‘chokey’ cough.   Thankfully not one that I needed to perform a Heimlich maneuver on!

For mains, we shared the slow cooked venison ragu, with herby set polenta and a dressed leaf and herb salad.  The ragu had beautiful depth and a good flavouring of red wine and although we were convinced had some spice in it, were assured it hadn’t.   I’d have preferred a side of mash or pasta to the polenta, which I always find rather cloying – but that’s a personal preference.

We also shared the Paolozzi’s Kitchen Winter Salad, with charred spiced cauliflower, pomegranate, edamane, toasted seeds and chickpeas and a tahini, orange and maple dressing, which was deliciously healthy, very filling and good value at £9.25.

There’s only a choice of two desserts, Panettone Bread & Butter pudding and an Orange & Almond Polenta Cake, both we decided were quite heavy choices to finish our lunch with.   Instead we perused the selection of cakes on the counter and both opted for their chocolate-orange brownie instead, which tasted just as it looked, rich with a very satisfying fudge texture. Paolozzi’s Kitchen has some tempting cakes and scones

Go hungry as the portions are generous but it’s the sort of place where you can linger for a long lunch, with service that is unobtrusive and the most impressive dining backdrop that you could wish for. You’d be hard pushed to find a more impressive backdrop to enjoy your coffee and brownie, overlooked by Paolozzi’s Vulcan

Kerry dined at the invitation of Paolozzi’s Kitchen