Café Modern Two – treat yourself to lunch away from the bustle

At Edinburgh Foody, we’re fans of Heritage Portfolio, the company that runs and caters some of Edinburgh’s finest locations, like the Portrait Gallery and the Signet Library. When they asked if I wanted to review Modern Two, the restaurant at the eponymous museum, I answered an enthusiastic yes.

On a somewhat windy day, C. and I set out. We’d planned to walk along the Water of Leith, but a broken ankle (C.) and sciatica (me) meant that we couldn’t walk very far. We might not have worked up an appetite the way we had planned but we really looked forward to lunch. 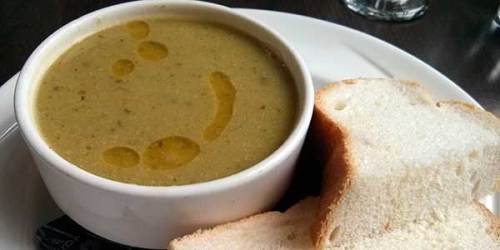 Soothing, warming and all the good things soup should be on a blustery autumn day.

Café Modern Two is easy to find: the entrance is immediately opposite the museum entrance. I feel a little guilty bypassing culture and going straight for food, but not much. The restaurant has two rooms. The one you enter first, the outer room, is immediately impressive. It’s dominated by Vulcan, a shiny metal sculpture by Paolotzzi. At over seven meters high, it rather owns the space. Our table was in the inner room, at a window, and I had a lovely view of Vulcan through an internal window. 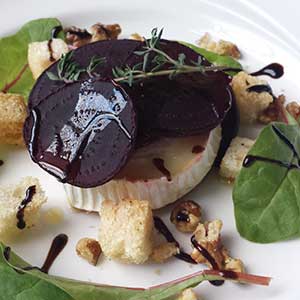 Goats cheese and beetroot stack. Good for you, as well as tasty.

The menu has a Mediterranean flavour. If you don’t want a two or three-course lunch, there are also sandwiches and a soup and sandwich combo that I imagine is very popular.

To start, I had the potato, pea and herb soup with bloomer. It was warming, soothing and full of piquant herb flavours. A perfect starter for a gusty day. Christopher had the beetroot and goats cheese stack. Modern Two do deals and at the moment, if you buy a main you get a complimentary glass of wine or a soft drink. I teamed my menu choices with a pleasant rosé. It is likely to be the last rosé I have this year and it was a pleasant way to say goodbye to summer. The wine would have worked with the smoked salmon, caper and spring onion filo tart that I was tempted to start with. 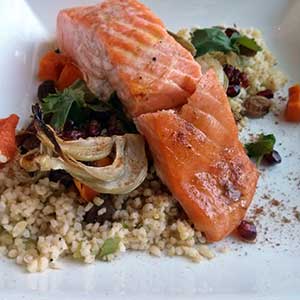 But I had decided to have Moroccan salmon as my main. It was a perfectly cooked piece of fish and came with bulgur wheat and roast squash. Plump sultanas and bright-red pomegranate seeds added sweetness and moisture, and pieces of roasted fennel were delicious. C. had the mushroom barley risotto. I have made comments on before about what a pity it is that restaurants don’t think further than mushroom risotto. That doesn’t apply to this risotto. For a start, it wasn’t just mushrooms but also sage and spinach. But most importantly, it was perfect: rich, creamy, with really nice chew in the barley and added crunch from pumpkin seeds. Barley and mushroom make very good partners. 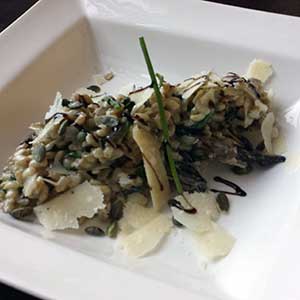 We were being spoilt: Spiros, the chef, knew we were coming, so had prepared a number of delicacies for us to try with our coffees. Because it would be rude not to investigate dessert, we shared a plum, ginger and apple crumble. A thick, deep russet compote hid under a layer of broken biscuit crumble. It was luscious. The créme anglaise made it ever better. It was the kind of dessert that fills me with nostalgia as I remember the fruit pies of my youth and how delicious they are when you come in after a long and cold walk.

The Amazing Tower of Cake 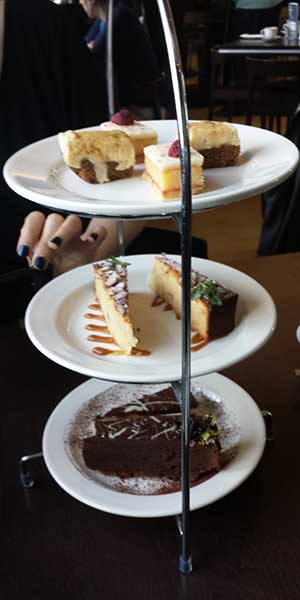 The amazing tower of cake. Yeah, we probably didn’t need even half a dessert each before eating this masterpiece.

Then came coffee and the tower of cake. We had ginger flapjacks that I thought were perfect: I like my flapjack with a bit of crunch. C. particularly liked the white chocolate and raspberry slice. We then tried the gluten-free almond and apple cake (and I carefully scraped the whisky caramel sauce it came with off the plate and into my mouth).

We left feeling soothed and happy, tummies full, enveloped by that particular feeling of goodwill to all mankind that comes from good food and friendly service.