Could you butcher a pig? 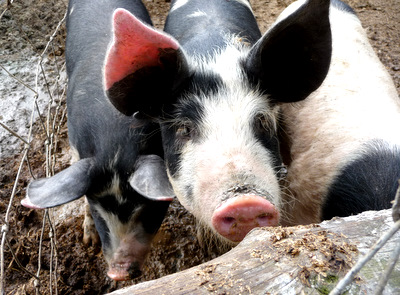 This post is perhaps not for the queasy or vegetarian amongst you, but don’t leave yet!

I really like to know where what I buy comes from. With farmers’ markets, it has become easier to get to know the meat producers and hear about how their raise their stock. When you get to visit the farm, you really start to understand the sheer hard work and dedication these men and women have for producing tasty meat for us to eat.

About a year ago, I decided to go one step further. A friend and I took a half-share each in a pig from Sunnyside Farm, Sanquhar, Dumfriesshire. We visited the farm to pick a Gloucester Old Spot piglet who would be raised on our behalf. The farm is lovingly run by Doreen, David and Dom Smith who produce pork, Dexter Beef and rosy veal.

She appeared to be a sassy piglet. We received regular updates when we visited Sunnyside’s stall at Edinburgh’s farmers’ market. She always seemed to be up to a bit of mischief. Something I rather liked. However, we did not see her after that first day and we did not name her. When she was good and ready, we set off to the farm to butcher the carcass. 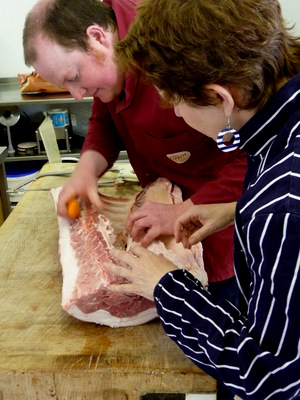 Working on the carcass with Dom Smith

We arrived for the butchery day got togged up and were presented with a beautiful carcass and set to work.  I can truly say it has been one of the most satisfying tasks I have every done. It was fascinating to see where the familiar joints were located and how they were joined together. Using the sharpest of knives, we followed seams of fat and gradually divided the carcass into pieces. We occasionally used a saw and a chopper to gradually reduce the bulk into recognisable cuts. 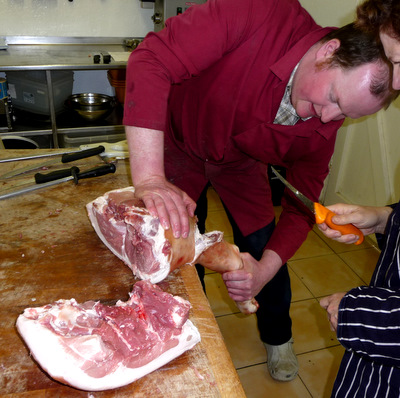 Dom demonstrates how to prepare the joint for ham

It took us the good part of day to joint the carcass and then create sausages and start the processes to make ham and bacon, with a break for lunch. When we asked Dom Smith how long it would have taken him, we found it would have been a mere fraction of the time. As to the meat, it has proved the most delicious we have ever eaten, and the bacon absolutely outstanding. 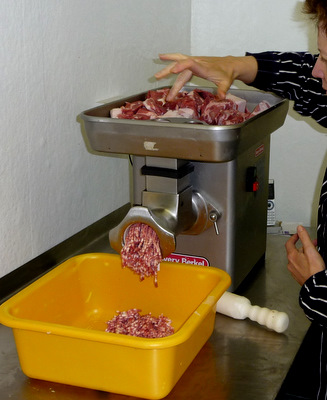 Do consider taking a share in a pig, you’ll never want to eat any other pork again.

Just some of the cuts and sausages from half a pig

All the pork and products were for our own personal use. We froze most of what we produced.

Sunnyside Farm are now running regular courses. Read how we got on with our second pig.