In praise of the pig

Those of you who read the blog regularly, will know that I have a thing about pigs. And, as this is a food blog, my admiration of the living beast naturally to eating. So it was a natural step to butcher one (or two). 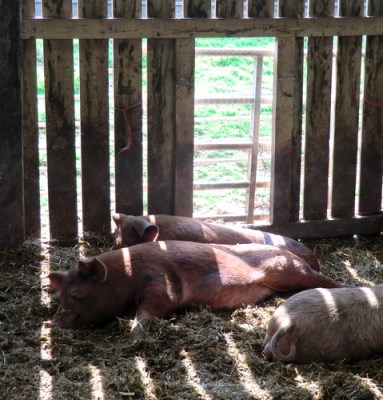 I recently met Yann Seznec, an Edinburgh based sound designer who creates music for online games. We got chatting and he described his involvement in the performance of One Pig devised by Matthew Herbert. Matthew decided to celebrate the life of a pig in music. Over 20 weeks he filmed the pig from birth to butchering (mercifully he wasn’t able to record in the abatoir). The chaps from Gardener’s Cottage will be doing some cooking in the performance.

It’s caused controversy as certain organisations believe a pig should not become art – probably because some parts of a pig were used to make musical instruments. Matthew’s very clear that he sees his album as a celebration and made sure he chose a pig reared raised on a local farm. If it is senstively done, as in this case, why ever not?

In the video Yann is playing an instrument he built called the Sty Harp. It’s designed to look like a pig sty. At the beginning of every performance the inside is filled with straw to reinforce that idea. He spends most of the show inside the enclosure (in many ways representing the pig). The strings of the sty are motion sensitive, and he built a hardware and software system for translating their movements into sound. This allowed him to pluck, pull, and twist the strings in various ways to generate the sounds – all of which are recordings of the original pig.

I was intrigued about the event at Cafe Otto in London. A performance took place before a group of people including food critic Matthew Fort who then went on to debate the issues before sitting down to a porky meal.

Yann explains “About two thirds of the way through the performance the pig symbolically dies, during the only song where the whole band is in the sty with me. After that I come out of the sty and a chef comes on stage and starts cooking pork, with big fans backstage to push the smell out on to the crowd. My role at that point is to sample the cooking sounds – most often the sizzling of bacon”.

Yann can be found on Twitter @theamazingrolo. You can read a very detailed description of how he built the Sty Harp, from a design and development perspective, on his website.