Another world awaits you,  a 3.5 hour flight away: Marrakesh.  You can sail to Morocco from Spain, but you’d need to drive another 7 hours after docking in Tangiers.  The short flight time does not really prepare you for the culture shift (and shock).

It is hot, very hot. The sort of heat that makes you perspire more every step you take. You will hear French and Arabic spoken. You will see Moroccan women covered from head to toe or in western dress (but always with legs and arms covered). You’ll find hundreds of cars, taxis and donkeys and carts. Everyone is on the move and on the hustle.

It can be a very frustrating place. As much as you want to browse and ask questions, the stall holders want to sell to you and you end up almost not daring to point or to show any interest to avoid saying “no” for the umpteenth time.

Is it a place for foodies?

Yes!  The food is down to earth, healthy and tasty. The flavours are subtle. Just don’t expect finesse or fine dining.

The cuisine goes beyond tagines and couscous – and includes long-braised beef in a ceramic pot that is taken to the local bakery in the morning and collected in the evening. Shoulder of lamb that is cooked until it is so tender it just falls off the bone. Chicken, beef and lamb sold from tiny kiosks with other unidentifiable meats.  Fish is very popular too, caught just a few hours away. Local produce abounds including dates, prunes and apricots and a myriad of nuts, beans and seeds.  There are citrus trees laden with oranges, grapefruit and limes that are transformed into refreshing drinks and thousands of olive trees growing very close to the city. Huge fat local grown tomatoes, peppers and cucumbers are the staple ingredients of refreshing Moroccan Salads.

A quick guide for foodies

At the centre of the city is Jemaa El Fna – a vast space that each evening fills up with food stalls. From around 5 pm, the stalls are built from scratch. It’s fascinating to watch the hue and cry, but you’d need to be brave (or have a very strong stomach) to eat there – raw meat kebabs stored in the heat until cooked, no running water … The Moroccan chef at the riad where we stayed, refuses to eat there since one stall holder tried to pass sheep’s head off as beef! 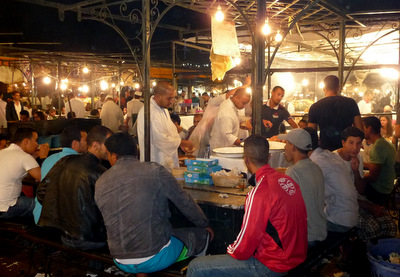 We were fascinated by one stall which was very popular with the locals. The guys appeared to be filling a bread roll with onion, boiled egg and possibly some potato. The speed they were working was astonishing. 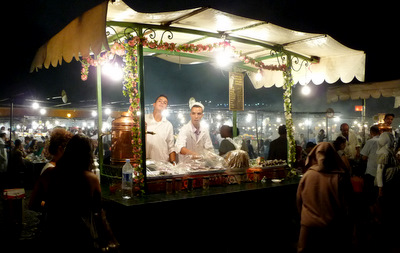 Mint tea is the staple drink wherever you go, here it was being served from huge samovars. There are even stalls that sell nothing but fresh mint.

Throughout the square there are rows of stands selling similar items set together. In this row piles upon piles of all sorts of dried fruits and nuts. In another area, juice stalls, just in case you get thirsty. 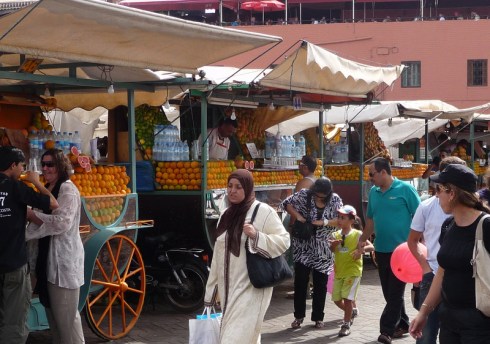 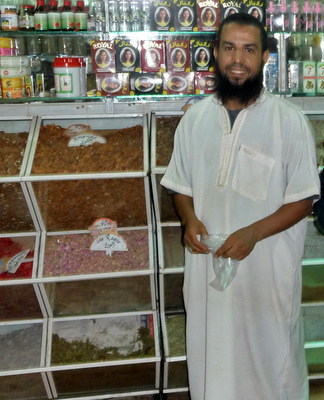 Most of the spice stalls double up as herbalists – you’ll see weird and wonderful things including minerals used as deodorants and henna as well as the more easily identified spices. Do watch for what is labelled as saffron – it is in fact, turmeric.  The souk is not the place to buy your spices – the prices are high. Venture a little further to the Jewish area and go to the Spice Market near to the Bahia Palace (well worth the 10 dirhams (£1) to visit). We met the charming Abdellatif L’Aadam who revelled in telling us about the spices on his stall including many of his own special blends. Good buys are charmoula spice and ras-el-hanout both difficult to find outside Morocco and staples of the cuisine. (Enter the Spice Market by the entrance nearest the Palace, he’s just inside on the right). 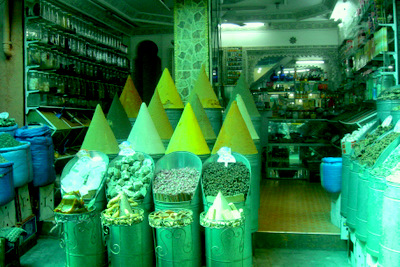 Part 2: Eating Out in Marrakech, and a recipe or two.