What is a Farmers’ Market? 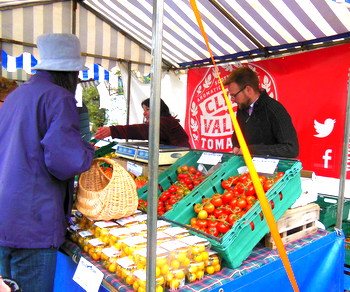 I grew up in the south of England. There were many markets close to where I lived. These markets sold all sorts of things not just food. Later, I lived in the Potteries for a while and Newcastle-under-Lyme was a haven for finding great 1920s ceramics often for less than a £1. Again, a mixed market that sold almost everything.

When I moved to Edinburgh, I was astonished to find there were no such markets. No places to get the bargain of the day, to listen to the stallholders or watch someone flogging the latest gadget. I had to wait until Farmers’ Markets started appearing across the UK in 1997.

By 2000, there were more than 200 farmers’ markets, now the total is over 500 and Edinburgh is one of the largest. All over Edinburgh markets are popping up, but only some of these are Farmers’ Markets. We’ve still not got the equivalent of a mixed English market. It’s hard to think back to a time when we didn’t have the farmers’ market on Castle Terrace. Now we’ve got a great market in Stockbridge that allows a broader range of people to sell, and many smaller monthly markets across the capital.

Just recently, I’ve noticed that some of the products on sale at Edinburgh’s Farmers’ Market are definitely not local. One week there were Isle of Wight tomatoes, another lemons. Was I the only one that noticed? Does it matter? 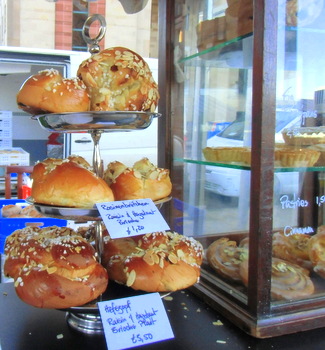 My initial reaction was that perhaps we had become complacent. I thought that we and possibly some stall holders had forgotten what makes a Farmers’ Market a true Farmers’ Market. Whilst exact rules may vary slightly by market, the ethos is that the produce sold is either grown within a small radius of the market or that the business making the products is local and using local produce where possible. The second criteria is particularly important for us, enabling producers such as Chocolate Tree to sell their range – it would be impossible to grow cocoa on these shores!

Please note we pay special attention to your location and if you are a primary or secondary producer. No imported or secondary retail goods will be allowed at the market. You must either be a local farmer or make goods using local farm produce.

It’s not all black and white

I turned to Brian McAteer, Events Manager at Essential Edinburgh  and Patricia Stephen of Phantassie Organic to discuss the matter further.

The range and breadth of services that Essential Edinburgh are responsible for in the city is mind boggling: from a system used by retail to alert shoplifters to the refurbishment of Rose Street and staff checking on cleanliness of the city centre area. They are also responsible for Edinburgh’s Farmers’ Market. Oddly enough though, they are not responsible for the itinerant market stalls that sometimes appear in Castle Street. Anyone who want to set up a market there, gets a licence from the council. 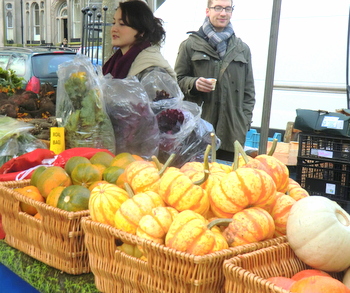 Brian confirmed to me that Essential Edinburgh take the rules seriously and aim to implement them. They do monitor what is sold and act on any discrepancies. However, he does confirm that it is difficult to keep an eye on all produce and there is just one person representing Essential Edinburgh on site every Saturday.

Patricia Stephen owns and runs Phantassie Organic and the Earthy shops and is a passionate advocate for organic produce. The majority of products she sells on her stand at the makret, are local but she does supplement these with other organic products to meet customer demand. She explains that currently there is no organic mushroom grower in Scotland – yet she and other stallholders do sell them. In selling Isle of Wight tomatoes, she asserts is providing organic produce, rather than local produce that might be treated with chemicals. She and another stallholder, East Coast Organics often discuss what produce they will bring to the market so as not to duplicate too many items.

So how strictly should the rules be followed? Should we be checking that no GM is included in animal feed? Should we be offering a service to shoppers to provide all that that they want to buy rather than having to go to more than one place?Should we only expect to see jams and chutneys made with local produce or are mangoes a suitable ingredient if the product is made locally? Or should we be shopping seasonally? If tomatoes are not available, eat something else! In Scotland, we have an increasingly interesting range of fruits and vegetable grown in polytunnels which greatly extends the season, is that not enough? I was astonished to see doughnut peaches one week – raised in polytunnels in Perth. 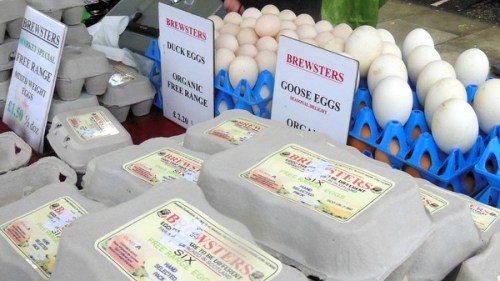 Have you tried Brewsters’ goose, duck and hen eggs?

Whilst I had the opportunity, I raised a few other niggles with Essential Edinburgh.

Of course, travelling by public transport or on foot is preferable, but when you live out of the city centre it’s not always practical. The NCP has now increased its rate to an eye-watering £7 for a minimum of 2 hours. There are relatively few on street parking spaces – but many permit holder only parking places. These restrictions reduce the amount of time car drivers spend at the market, no time to linger and chat.

Essential Edinburgh are in discussions with NCP – we hope there will be a solution proposed soon – perhaps a 1/2 hour rate on Saturdays?

Range of Producers and Stalls

There have been some rather strange rules applied, such as having only one egg producer or pie maker at a time, when there are multiple meat stands. Essential Edinburgh are looking at ways to enhance the market and are looking for your feedback. I’d like to see smaller pitches available for start ups, perhaps sharing a stand. A guest stand each week.

Markets on the Move

You may have seen the markets that occasionally grace Castle Street – many of these are of dubious quality and prices are high. Organisers of these markets simply apply to Edinburgh Council for a permit, Essential Edinburgh is not involved. However, they have flagged it up as an issue.

Essential Edinburgh are also looking to take Edinburgh Farmers’ Market Stallholders to other locations in the city. Recently they had a mini market in St. Andrew’s Square.

Scotland prides itself on its high quality food and drink, yet we have no covered market such as that in Belfast – which is superb.  I’d love to see one of the redundant buildings turned into a viable venue. Then, perhaps we’d see a truly local, but mixed food market and one that could also promote local cafes, and crafts. Who knows it might just happen. I’ll be keeping an eye on developments! Let me know what you think!