Whatever happened to… Jacques, The Backstage Bistro and La Bagatelle

You turn your back for a year or two and suddenly your favourite restaurant is no more.

Edinburgh has a lot of restaurants so competition must be fierce. New restaurants open all the time and old ones die and disappear. Sometimes it’s obvious why a restaurant isn’t successful, at other times it is a mystery. Recently, I was walking around Tollcross looking for something to eat and found that some of my favourite restaurants had stopped serving, and another one had gone to seed. The question is why?

Opposite the King’s Theatre, on Gillespie Place, used to be a nice, relatively cheap, authentic-feeling French restaurant called Jacques. I loved it. The staff spoke French, the butter was from Normandy and the cooking was traditional, solid and lip-smacking. They did a good value pre-theatre menu, and you had to book because it was always busy. I’ve had some very nice meals there and a very memorable birthday party with much champagne. Now it’s gone. What happened?

Around the corner from the King’s Theatre, on Valleyfield Street, was the Backstage Bistro, a tiny but pleasing restaurant. It was family run, could take maybe 12 covers, gave lovely and warm service and served equally delightful food. It was similar to Jacques, in that you had to get a reservation. The miniscule room meant that there was no room for last-minute drop-ins. The size meant that if you were a couple sharing the room with a private party, you could feel a little excluded or overwhelmed by the noise, but that didn’t change the quality of the food or the service. Bye-bye Backstage Bistro! In its place is now a Thai take-away that does not look as if it’s getting much business (the scaffolding on that side of the building probably doesn’t help footfall). Is it a doomed location?

Along the road and around the block from where the Backstage Bistro used to be, on Brougham Place, is La Bagatelle. Back then, in its first few years, it was one of the fanciest and most expensive French restaurants in Edinburgh. It had shiny wallpaper with black-framed pink and black prints and waiters that came round between meals with a silver brush and pan to clear crumbs from the table-cloth. I loved it. The food was new, exciting, and as I remember it, exclusive. Today, La Bagatelle looks rather tired and hasn’t got a licence*. I had dinner there, last week delighted to find somewhere open after finding out that my other two old favourites no longer existed. 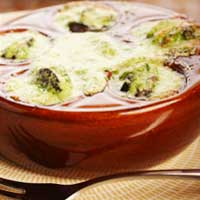 Not the exact escargot I ate, but a fair representation of their beauty.

After arming ourselves with a bottle of wine from the shop down the road, we popped in to take our table, booked mere minutes earlier. The decor now is a powder blue, soft and friendly, if a little jaded. The art is less 1980s and more timeless and the waiting staff is still French. The food is good. Maybe not excellent, but definitely good. The menu offers seasonal and relatively safe French cuisine. I started with perfectly cooked snails in a delicious garlic butter, before having a tender duck breast with tart cherries. I finished with cheese. Everything was perfect, with the exception of the duck which was slightly overdone, but not enough for me to mention it when I was there.

What surprised me was that the restaurant was dead. When we arrived, at about half past seven on a Friday, a party of four was finishing dinner. No one else came in when we were there. We had a warm and friendly reception, attentive service, lovely food at a reasonable price. So what is keeping the punters away?

Is it a decor thing? Maybe, it could do with a lick of paint and a brightening up. Has French cuisine gone out of fashion? It can’t have – Le P’tit Folie and L’escargots blanc & bleu are doing well. It’s not the area:  Tollcross is busy. The Thai restaurant next door was doing a roaring business and the Greek across the road certainly didn’t have any tables free.  Maybe it is just the licence issue.

What ever the problem is, I hope it gets fixed. I enjoyed La Bagatelle and want it to do well.

* Don’t let that put you off: it’s temporary and you can bring your own.