Ducks, Aberlady: all in a row

Ducks Restaurant in Aberlady puts on a good table.

‘Tis the season of birthdays. To celebrate two friends’ 40ths in style we went to Ducks Restaurant in Aberlady the other week. Duck’s owner Malcolm Duck, used to have a restaurant in Edinburgh and is now the proud proprietor of a restaurant, a bistro and a hotel in Aberlady, in East Lothian. He’s a cheerful and generous man who enjoys chatting and broke the ice very effectively while opening the bottle of champagne that was waiting for us at the table. 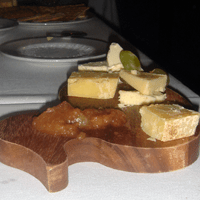 It is nice when waiters know the menu and are willing to share their passion with you. It’s a fine line between sharing too much and entertaining the table: at a table of six, there’s usually a good amount of entertainment going on. Ducks is a small restaurant: there were maybe another 20 covers in there and they were fairly quiet. That is, the customers were quiet, the restaurant certainly wasn’t. Ducks is a busy place.

My scallops with Hollandaise sauce and bacon was nice, but… I always have problems choosing and as tricky a choice as this was I’m not sure I made the right one. All the elements of the dish were cooked to perfection and individually they were gorgeous. For once, the total didn’t rise above the individual elements. The white onion soup looked and smelled luscious!

The venison was great. The meat was tender, beautifully brown on the outside and deliciously blue on the inside. It came with a star anise jus that was nicely judged, a lovely risotto and a mash that tasted a little too much of cinnamon. The boys had steak were very happy with their lot. Steaks were big and came with delicious trimmings of fondant potatoes, greens and haggis fritters. 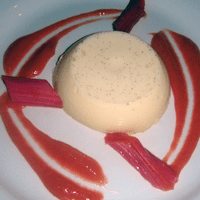 For dessert I had the rhubarb panacotta and then nibbled at the cheese left over by the stuffed steak eaters. The panacotta came with two types of rhubarb: sticks and puree. Tasty!

The meal was a gift, so I’m not going to talk about price here, but it was really quite reasonable (especially since the champagne was paid for separately).

Ducks offer more than food. You can stay at the hotel or eat at the bistro, Donalds.