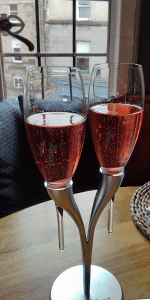 I was tempted to grab the stand, not just my glass.

When I grew up, French food was the epitome of all things elegant and fancy. The country had the patent on style, sartorial and culinary. Italian was earthy, Chinese exotic but only French managed to be elegant. In the town I spent my first ten years there were only three types of restaurant. When I was four and five, we went to the Chinese every Tuesday because it was cheap and I could get stuff in fluffy batter, served with sweet, sticky sauce, for both main and dessert. When I was seven and eight, we spent the summers on the French Riviera and ate French food every day. Although this removed some of the mystery of French food to me, it only added to the glamour.

When I was eleven, we moved to Stockholm and the culinary landscape opened to me. Swedish, Indian, Malaysian, Italian, Turkish, American, Tex Mex, Japanese – capitals are melting pots and their restaurant scene reflect that. The French cuisine remains a favourite with me and an elegant restaurant, whether in Stockholm or Edinburgh, often offers local with a French twist. I love going to authentically French restaurants. There are several in Edinburgh but one of the first ones I learned to love was La P’tite Folie.

La P’tite Folie has two restaurants, a busy, buzzy one on Frederick Street and a little more reserved in Tudor House in Randolph Place. Last week, my glamorous companion and I visited the Tudor House restaurant. 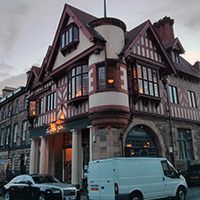 Tudor House and its inviting turret alcove. I ate there.

Tudor House is a beautiful building and we sat in the turret alcove, a cosy nook with a nice view of the street outside. While reading the menu and negotiating who would have what and which dishes were the most exciting, we sipped kir royales. They came in very attractive foot-less glasses that could be dangerous if you had more than one glass.

The menu is rounded and varies regularly. If you’re after vegetarian, ask what today’s option is before taking a table. This is very much a fish and meat restaurant (as you’d expect, from a French establishment). There’s often steak and lamb, rillettes, steamed mussels and other tasty French classics on the menu. The room is unfussy with sturdy tables and French posters on the wall. It’s bright and comfortable. 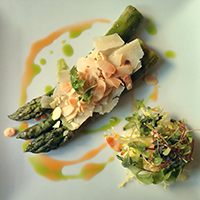 Spring on a plate.

You always get bread and a small salad to nibble while you wait for your starter. I really like that. It whets the appetite without filling you up. I’m personally rather partial to the Dijon mustard dressing that the salad comes with: it’s tangy and used sparingly so that it doesn’t swamp the crisp lettuce. I started with asparagus with parmesan shavings, flaked almonds and truffle oil. It was a fresh and light dish to start with and had the added benefit of making me feel virtuous. My companion had the Barbary duck breast with braised cabbage, bacon and Calvados jus, It was meaty and tender. 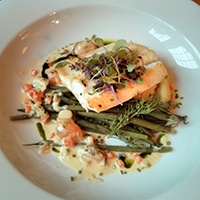 Gorgeous halibut. I was so excited about my steak the photo didn’t come out. Sorry. It was fab!

For her main, my companion had the fillet of halibut with lemon grass and mussel broth. She had great difficulties choosing between that and the rack of lamb with fondant potato and a Niçoise of olives and tomatoes with a mint jus. In the end, the mussels won her over. I’m sure the lamb would have been great too but the halibut was lovely. It sat on a pile of green beans, surrounded by a rich creamy broth.

I also found it difficult to decide what to have for my main but decided to go for a French classic: steak frites. The steak was juicy, cooked to perfection (which for me means somewhere between blue and rare) and came with a spicy, satisfying Café de Paris butter and a large heap of pommes frites. Fat chips in all honour, but I love the thin crispiness of a pommes frites. It’s the deep fried potato shape of my childhood and I am deeply loyal to it. 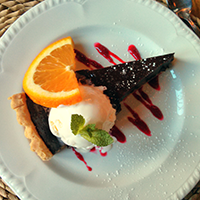 The ultimate chocolate tart? I think so.

La P’tite Folie does a really nice cheese board and is a popular option for my companion, who has a savoury, rather than a sweet, tooth. I couldn’t resist the chocolate tart, an unusual choice for me. It was just perfect: dark with chocolate and smooth with cream. The pastry was crisp and the vanilla ice cream worked perfectly with the rich chocolate. It had the tiniest wobble and made me very grateful that I’d passed on the Colonel – lemon sorbet and vodka, very refreshing – I usually have.

I have been going to La P’tite Folie for years and have always enjoyed the authentic French food and a warm, friendly welcome. This night was no different. The food was lovely, the ambiance comfortable and unpretentious. The staff were stars.

When I got home, I received a phone call from the restaurant telling me that I’d dropped my headphones under the table. Thank you, Maria, for re-uniting me with these, to me, very important objects! And thank you for giving us a really nice evening. 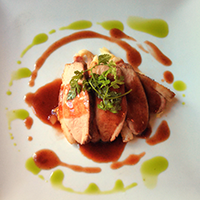