Taste London 2011 was a glorious place to eat but not a good place to show off your open-toed sandals.

For the first three years of Taste of Edinburgh I went to it with my good friends Hamish and Rebecca. In March this year, they moved to Tennessee and I rashly vowed not to go to Taste Edinburgh without them. Luckily, Edinburgh isn’t the only city that has a Taste festival: this year, I went to London to experience what the restaurants there have to offer.

Comparing the two festivals is like comparing the two cities: they both have a lot of good food but London has so many more people and therefore so much more of the really good stuff. At Taste London, several Michelin-starred restaurants were serving up their goodies. That does not happen at Edinburgh. 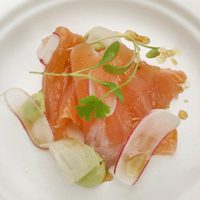 Taste London was in Regents park and it had been raining for a couple of days.  I hadn’t brought wellies (I don’t own wellies but even if I did I wouldn’t chose them as my only shoes on a hand-luggage weekend) but  many people sensibly wore them. There were walkways and the squelchiness of the ground off them put people off exploring some of the producers. A great shame. Luckily, the walkways took us past all the restaurants. After our complimentary glass of champagne in the BA reception area (where the hostesses had rather lovely Union flag wellies) we set out to taste London. 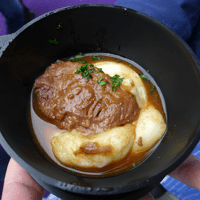 My first stop was Gordon Ramsey’s Maze and Petrus. At one I had a delicate cured salmon and at the other a rich and satisfying little pot of pork cheek. They were both very good. The salmon was a gentle fishy caress, gone in a trice. The pork cheeks caused a lot of excitement because they came in little black pots with lids. People were protectively carrying their pots away from Petrus’s stand to open them. In each, a medallion of cheek nestled on a light creamed potato. The two were brought together by a light jus. I don’t think I was the only one who considered whether it was possible to lick the pot clean to get at the very last of the potato and jus. In the end, the pot was a little too deep for me to forget my manners.

Deciding what to eat 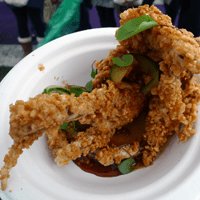 I had a hard time choosing what to eat. Each session is four hours but there’s only so much food you can eat. The dishes aren’t cheap – between £4 and £8 – and the sizes vary although most of them are small. They are tasters, after all. Usually, I look at the dishes and decide what I want. This time I decided which restaurants I wanted to try and then chose a dish. There was one exception to this approach: I have never heard of The Modern Pantry but saw softshell crab on their menu and had to have it. It was rich and large and although the krupek coating added good seafood flavour I didn’t really like the texture. The centre of the crab was a steaming mess of crabby delight. 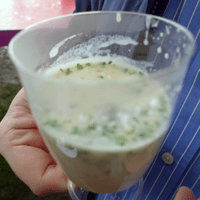 The softshell crab was good but it wasn’t the best thing I had. My favourite dish of the day was a white bean velouté from Le Gavroche. It has a plump snail at the bottom of the cup and the velvety soup was a perfect foil to the garlic and parsley flavours that came with it. I stood under a white awning, waiting for the thundering rain to stop, sipping my velouté and feeling completely at ease with the world. A dish that can make everything feel wonderful deserves all kinds of stars.

As I was queuing up for Le Gavroche, Michel Roux was issued past on his way to somewhere else. A group in front of me wailed “oh no, don’t leave” and he very gracefully stopped to have a couple of words and promise that he would be back soon. It was difficult not to go all fan-girl on him. Ever since I watched Michel Roux’s Service I respect the man tremendously and am also sure that he’s one of the nicest people to ever work in a kitchen.

I didn’t make it to Roux and The Landau, where I wanted to try the salt cod brandade, because I was running out of Crowns (the currency of the Taste festival realm) and had to go to a “bank” to buy more and ended up in the wrong end of the park. 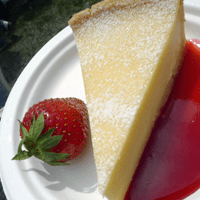 I was no longer ravenous but I thought I had room for another three or four dishes. I was wrong. The normal serving sized lemon tart from Rhodes 24 pretty much finished me off. It was very good and although I like my lemon tart a little tarter I think I’m alone in that. It was well judged and generously sized. Since we were on to desserts, I shared a Sashertorte with a friend on the Visit Vienna stand.

BA sponsored the festival so it was arranged in geographic areas: Europe, the Caribbean and so on. There was a lot of tourism marketing going on in among the food. I enjoyed watching the making of Sachertorte more than I enjoyed the torte itself. This was the first time I’ve had one where you could taste the tang of the apricot and still I didn’t particularly enjoy it. When I go to Vienna, Sachertorte won’t be what I’ll go for. 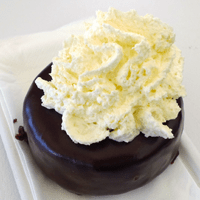 Over Sachertorte we talked to a guy from Chicago. He was surprised that there was so little food at the festival. There’s a similar event in his home town which is all about eating. He said that at Taste London people seemed more interested in drinking. So that’s what we did next.

We sat down in the Waitrose/Hendricks enclosure and had an English Garden: gin, St Germain elderflower liqueur (which I think might be a necessity in my summer drinks cupboard) and cloudy apple juice over ice. Very refreshing and not as long a drink as maybe it should have been. 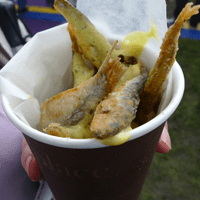 The English Garden was the last thing I managed to consume, apart from a couple of nibbles of Fudge’s biscuits, a tot of toffee vodka, a mouthful of Ting and a fingers-breadth of French-style spelt load. My eating companions – who had tried delightful dim-sum from Yauatcha, papdi chaat (spiced chickpeas and whole weat crisps with fresh mint, sweetened yogurt and tamarind chutney) from Tamarind, whitebait with tartare sauce from Quo Vadis, a Jamaican vegetable patty, a slightly under-minted pea and mint mousse from Petrus and courgette flower with goats cheese from the Opera Tavern – were also full so we converted our remaining Crowns to nibbles for the evening, picked up our complementary recipe books and headed off home for a snooze.

We were disappointed that the wild mushroom fettuccini with summer truffles from L’Anima and the raspberry and rose sorbet from The Modern Pantry were gone by the time we got around to wanting them. 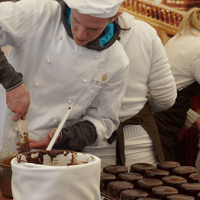 I did say that I won’t go to Taste Edinburgh without Hamish and Rebecca. I lied. We got very cheap VIP tickets (more champagne! A second recipe book!) and will go to Edinburgh. Having seen Taste London I am curious to compare it to this year’s Taste Edinburgh. They seem to have had problems getting restaurants because this year some restaurants have come from Glasgow. Judging from the recipes in the recipe book, the northern offering won’t be as ambitious as the London one although I am sure the food will be perfectly prepared.

(A whisper in your ear: if you ever get the chance to have white bean veloute at La Gavroche, take it!)