Danielle: I’d been staring longingly at Wagamama’s each time I walked past but my resolve stayed until it was time to experience the Winter menu  or otherwise known as the UK specials. I’ve been hearing good reports from everyone who’d visited, not just Caroline! Choosing to get there at noon proved a good choice. We very quickly got seated – at 12:30 the queue was almost out of the door. 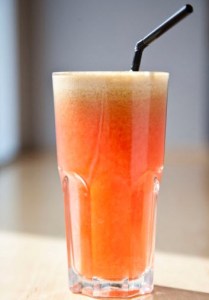 My daughter introduced me to Wagamama’s I’m not sure how long ago. Until now, I’d been to Wagamama’s  in London, Bristol, Manchester, Glasgow and Livingston.  The Edinburgh restaurant seems  unusual in that there’s an eating area with tables for four rather than the long benches we’re used to. It makes great sense if you’ve got children with you though but I rather hankered after sitting at the long tables.

What to choose? I just love the juices. Truthfully, they are a little odd looking as the juices invariably settle out, but ignore that. They taste great and are so refreshing. I had a Super Juice: apple, orange, sharon fruit and cranberry juice.

I was hankering after something spicy so chose the firecracker prawns with mangetout, chillies and peppers in a fiery sweet and hot sauce with shichimi (hot pepper), sesame seeds and lime. It certainly hit the spot, although I did chicken out at eating the whole red chillies! 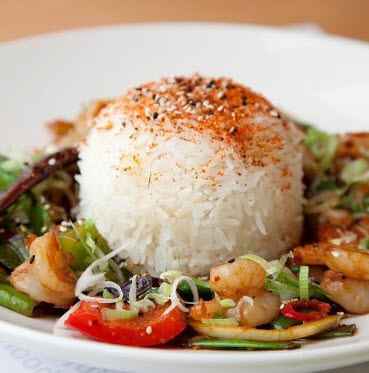 One of my companions, Blythe,  had the lemongrass and mint chicken soba which was equally delicious. Katey and Miriam tucked into the gargantuan salads. Miriam was in heaven “It is so hard to get a decent salad in the UK” she said happily eating herself happy. We also savoured some  gyoza (dumplings) and chilli squid.

We found the staff pleasant but rather tentative not quite the confident sassy people you’ve come to expect at other Wagamama’s. I am sure they’ll settle in.

I wondered whether they were explaining how the dishes come when they’re ready rather than in any particular order to all their new customers – which is a bit disconcerting.

Our verdict: A great addition to Edinburgh’s vast array of restaurants. Just make sure you picker a quiet time to turn up.  I can recommend the prawns!

Caroline’s post: Wagamama opened in Edinburgh Tuesday, November 2nd. It’s with great excitement that we see this best of chain restaurants open its doors to Edinburgh diners. I was there for dinner on one of the training days and can confirm that the staff and kitchen is up to speed. Over the training days the restaurants was probably as busy as it will ever be, with hundreds of diners enjoying complementary meals. 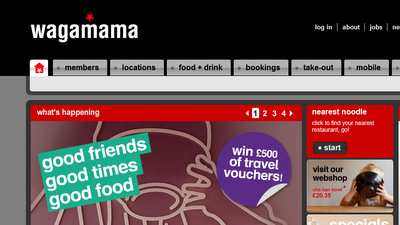 I brought another glamorous companion (I’m very popular when I can offer friends a free meal) along to help me taste the Wagamama delights. There are some new dishes on the menu that are very good indeed! Edinburgh Foody will give a review into the autumn specials soon so other than hinting that I’m a fan of a good seaweed salad, I’ll leave the specials alone.

The beef teriyaki soba is hearty and the beef perfectly pink. I usually prefer my noodles in stock rather than fried because they get a little oily. Tasty, though, entirely tasty. I also had the chilli squid side which is crispy, generous and set off by a very nice sweet dipping sauce. It’s difficult to chose between favourites like the squid and the gyoza since I’m a fan of both. This time, squid won because my glamorous companion hadn’t tried it. Her chicken and prawn ha chan was a huge and soothing dish of stir fried rice with vegetables. It comes with a side of pickles and miso soup. All good stuff.

I know that it won’t be long before I’m back.

(Sorry for the lack of pictures: I had a battery disaster.)