Hewat’s restaurant, Edinburgh – a visit to the Southside

A good local restaurant is a place that caters to the people in the local neighbourhood. The South side of Edinburgh – Newington, Causewayside – is a quirky area with a lot of students as well as families and couples of all ages. When we went to visit Hewat’s, we didn’t really know what to expect. I had heard good things and knew that it served Scottish/French food. I like that, so I was looking forward to the experience. We were not disappointed. 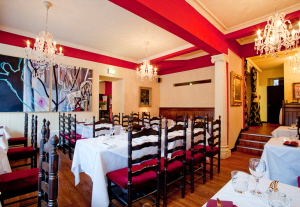 It was a cold and blustery night in January that we went over to what I think of as Edinburgh’s South side. Causewayside has a lot of bars and shops on it: it’s a busy street. Hewat’s is on the Meadows end of the road, close to the Sciennes student housing and a block over from the busy Newington Street. I lived in the area for a a month a few years ago and really liked it. There’s a lot on offer, from fancy to plain, and there’s a shabby kind of vibrancy about the area.

There’s nothing shabby about Hewat’s. The room is large and comfortable, the white and warm red walls set of upholstered baroque chairs and plush faux-leather upholstered tables. The ceiling sparkles with chandeliers and rustic metal candle holders light each table.

We had a table by the window. Louvred blinds protected us from the envious eyes of chilled and hungry wanderers while showing anyone on the outside enough of the inside to make it obvious that the place wasn’t empty. That’s important. January’s a really quiet month and lots of people don’t like to be the first in a restaurant. You know how it is, you want it to have a bit of a buzz when you get there. 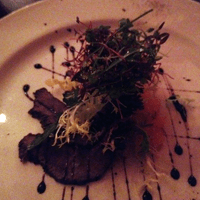 Carpaccio of venison with mandarins and crunchy parsnips.

We both started with carpaccio. Yes, C’s a vegetarian, so he had beetroot carpaccio with goats cheese. I had the venison. On the table was also a bowl of warm kalamata olives, marinated by the chef, Scott. They were an absolute revelation and went particularly well with the beetroot and goats cheese. I started planning a dish around a warm kalamata tapenade immediately. They were that good. The carpaccio was also good. The thin slivers of venison were served on thin slices of mandarins and accompanied by crispy parnips. It was clean and fresh. 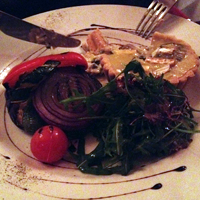 As we waited for our mains, the restaurant started to fill up. In one corner were a couple who probably go every week – they were well known and had a usual table. To our left was a table of six women catching up after choir practice, and trying to decide whether to have glasses or bottles of wine. Further in were a couple of couples out of a leisurely bite, a bit like me and C. Everyone was enjoying themselves. January is a very quiet month – January and November are not the restaurant trade’s best times – and it was mid-week. It was nice to see that there were people coming out, supporting their local restaurant. 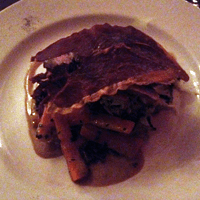 Loin of boar on a mustard mash, hidden under a large piece of crunchy air dried ham.

As my main, I had the roast loin of boar with mustard mash and braised cabbage. The boar was really moist and the mash was delightfully soothing. Mash and cabbage makes me want to curl up in front of a fire and here was a wonderful serving of warming and tangy comfort. C. had a brie tart with grilled vegetables. Creamy and crunchy in equal parts.

Hewat’s do a lot of different special offers so it is worth keeping an eye out. In January they were running free corkage on BYOB as well as a dinner for a tenner deal. These are good offers. We chose from the a la carte menu. 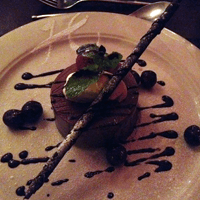 Chocolate mousse. It looks small but that’s because of the enormity of that chocolate curl. I mean, look at that! It’s a foot across. (Almost.)

C. finished his meal with a coffee and petit fours –  tablet, Drambuie truffle, shortbread and biscotti. I went for the evening’s special desert: chocolate torte with kirsch-soaked cherries. More of a mousse than a torte, this was a desert worth coming back for. Not only was it enormous and very pretty with its bright white H on the plate, the longest chocolate curl I’ve ever seen and shiny sides, but it was also very good. Creamy, and with good chocolate flavour it was neither too sweet nor too bitter. The cherries were tangy and pretty too.

I’m not over on the South side of Edinburgh all that much but I think that should change. Hewat’s a really nice neighbourhood restaurant with good food and good prices. I’d enjoy going back. So, who do I know in the area?