Malmaison, Edinburgh – service with a heart and food with flavour

Malmaison sits a little apart from the other bars and restaurants on the Shore in Edinburgh. The first time I went there for a drink was in the late 90s when a friend of mine was touring Scotland taking pictures for a French travel magazine. She was staying there and was most impressed with the rooms. That night we went back to visit old haunts and ate at Blue, which is now gone. My friend is still a photographer but she’s now based in Bangkok, on the other side of the world. Things change. Malmaison, thankfully, still stands. Last week, I went there and took the door to the brasserie instead of the door to the bar. It was the start of a delightful evening.

The brasserie at Malmaison, Edinburgh (thank you to Crimson Edge for the picture). 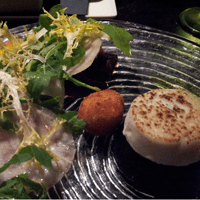 As well as a hotel and a bar, Malmaison has a brasserie that serves a range of international dishes. The restaurant is large but the room manages to be cosy and intimate. The dark walls and some very clever lighting makes each table into its own calm island. The rather good photos C. took for me is a testament not just to the superiority of his camera over mine, but to the lighting. It was a Friday night and the restaurant was busy with couples and groups having a good time. We sat in the window nook just inside the door. There are two tables in that area, and as our meal progresses we watched the other table empty and then fill again. The other couples looked just as comfortable and happy as we were. 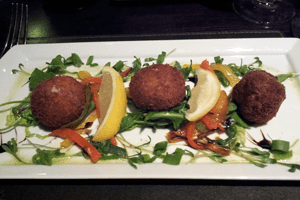 Salty brandade balls and slinky peppers, salad and lemon all working together.

I started with the salt cod brandade balls, balls of creamy salt cod in a crispy, fried coating. The saltiness of the cod was offset by the sweet over-cooked peppers that accompanied the brandade. C. had goats cheese and beetroot jelly. It looked spectacular: the clean white cheese on top of a jewel-like red (vegetarian) jelly. It was served with puffy goats cheese balls that were absolutely amazing. I could eat them all night. It’s unfair on all the good food we had that night that the cheese balls is what stuck, but as I write I wish I had a small bowl of them and a glass of mellow red wine. Instant bliss.

The menu has a good mix of vegetarian, fishy and meat-lovers options, from classics like chicken liver parfair and prawn cocktail to more glamorous dishes like smoked salmon blinis. Salads and mains present a mixture of international favourites such as grilled Normandy chicken, Thai green curry, and swordfish. The grill section offers a number of different steaks and sauces as well as the Malburger, Malmaison’s own take on the burger. The specials board offers variety and colour 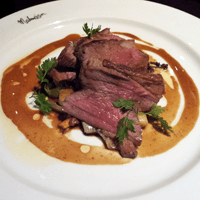 For main, I had the rump of lamb, served with leeks and summer girolles. My favourite mushroom were a beautiful orangey-yellow and twinkled in the rich truffle dressing. The lamb was perfectly pink and tender, and the mushrooms and leeks were savoury and rich. With it I had buttered potatoes that were delightfully sweet against the lamb’s dressing. C. had the special vegetarian, which was a risotto primavera. On the menu, that’s served with a Parmesan crumble – which sounds nice – but C. asked to have it without because of the Parmesan.

I’m going to digress just a little here with a note on cheese production. It’s a surprisingly little-known fact that cheese is made with rennet. There’s veggie rennet and traditional rennet. The latter is made from cows stomach so cheese made with traditional rennet is not considered vegetarian. Parmesan, the real, true deal, is made with traditional rennet. And yet, Parmesan is common in vegetarian dishes because we forget that not all cheese is veggie. In the UK, veggie rennet became common during the mad cow outbreak, so British cheeses are, usually, fine. Or at least, that’s what cheese-selling friends have told us. Saying no to Parmesan and having the cheese board isn’t the contradiction it might seem. 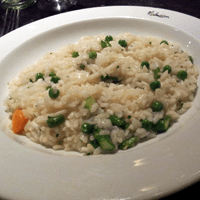 Our server very kindly checked why we didn’t want the Parmesan crust and spoke to the kitchen about the risotto since it was likely that there would also be Parmesan in it. Kudos to the kitchen. C. received a perfectly cooked, very soothing dish of risotto, entirely Parmesan free. It wasn’t the cheesy, crunchy dish the chef had planned, but it was a flavoursome risotto, silky rice serving as a background for the last of the summer vegetables, that C. could eat. We really appreciated their willingness to adjust the recipe for us. 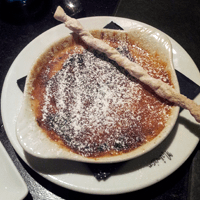 Desert was an easy choice, for once. C. and I were torn between the same two deserts so asked for double cutlery. It’s been a long time since I last had crème brûlée and I’ve missed it. That first crack when you break the hard, golden sugar is delicious, but not as delicious as the vanilla-infused cream underneath. The cheeseboard was just the right size, had several interesting cheeses and came with home-made biscuits, one oat and one cheese and seeds. I got all of the cheesy ones (there was a risk for Parmesan) and they were lovely.

The food was great, but what really made our evening was the warm welcome we received. Everyone we spoke to were friendly and made us feel very much at home.