Buckwheat’s not just for blinis. In recent months I’ve been enjoying this ingredient in several ways: as flour, in soba noodles and as the full ‘grain’. Buckwheat is wheat and  gluten free (if that’s important to you) but the thing that makes me fond of it is its flavour. It has more flavour than wheat and takes a step towards rye but is not so strong that it overpowers other flavours. It makes an excellent background to zippy flavours in a buckwheat tabbouleh or umami flavours in a noodle pot. It also works well with sweet things: buckwheat flour is my staple pancake flour.

The green, red and yellow that makes tabbouleh sparkle. 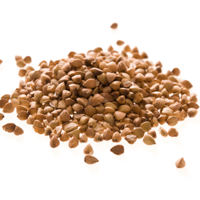 Buckwheat isn’t wheat at all.

Buckwheat isn’t wheat. It isn’t a cereal crop although it is used as one. Traditionally, the Russian countries are the main producers and consumers of buckwheat but the seed has reached a wider market and are used in different ways all over the world.

In Japan, buckwheat noodles – soba – are eaten cold with a dipping sauce in summer. I have harboured a long dislike of cold pasta but cold soba noodles, dressed with a little sesame oil, some soya sauce, a little lime juice, and a pinch each of finely chopped garlic, ginger and chilli, makes a delicious and satisfying base for an Asian-inspired salad. They are also at the centre of my favourite dish: the ever-changing noodle pot.  (I’m writing a separate post on noodles for autumn and will include my noodle pot recipe there.)

In Russia, buckwheat porridge is common. This is made not from flour but from the whole grains – when boiled vigorously and long they explode into a starchy mush with more flavour than that description may lead you to believe. The grains can also be used as a substitute for other starchy foods: rice, cracked wheat or quinoa. On a glorious summer’s day, tabbouleh inspired buckwheat salad is a great side or main. You’ll find a recipe below.

Tabbouleh is traditionally a bulgur wheat and parsley salad generously dressed with a tangy lemon and olive oil dressing. My take on buckwheat uses the traditional ingredients parsley, tomatoes, onion as well as the olive oil and lemon juice dressing but adds rather more grains than the original. When you can get big bunches of parsley, the traditional style is ever so tasty and good for you. (Green things are, I am told. Repeatedly.) My version serves 3-4 as a side or 2 healthy eaters as a main. 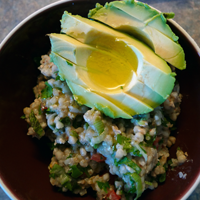 Tabbouleh style buckwheat with a side of avocado. Tasty!

I like to serve this as a main meal with half an avocado and a dash of olive oil on top. It also works really well with lamb kofta or venison sausages. Any left overs are nice cold and if you’re into a savoury breakfast, there are worse ways of starting the day than having a bowlful of buckwheat tabbouleh-style.

Where to get buckwheat in Edinburgh: 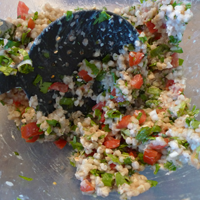 Save Print
Preparation time
20 mins
Cooking time
25 mins
Total time
45 mins
Buckwheat is healthy and tasty. If you haven't used it before, this is a good way to try it a first time.
Author: Edinburgh Foody
Recipe type: Side
Cuisine: Middle-eastern
Serves: 2-3 servings
Ingredients
Instructions
3.5.3208