American Adventures 1 – all kinds of cocktails The grapefruit rickey is one of my favourite cocktails now.

Holidays are wonderful. You change your perspective and habits for a while and eat, drink and nibble things that you wouldn’t normally. The thing I enjoy about the US is that it is so similar to, yet so different from,  the UK. The portion sizes used to put me off eating but I’ve overcome that scruple and learned to ask for a doggy bag. Or eat the good bits without apology.

Usually I go to the States when it’s warm. Real warm. I’m happy in 30C+ as long as its relatively dry: humidity gets to you. I spend most of the year in layers, feeling cold and tired, so the hotter the weather when I go away, the better. (As long as I can stay out of the sun. I want heat, not a tan.) This year wasn’t as hot as last year and when we landed in Washington, they had a comfortable 29C. When we left Dallas, the last stop on our tour, they had 40C. Edinburgh had 16C when we got back.

I’m holding on to warm memories. This is the first of a three-part series of post about American staples and delicacies. Today, is all about drinks.

Our four-stop American tour started in Washington where we did a lot of walking and sight seeing, as well as a fair amount of eating. There’s some great restaurants in Washington, and lots to see and do. It was hot and as we walked we carried bottles of water, pop and iced tea to keep the heat-headache at bay. Iced tea is tastier than water (although I do like water) and easy to make at home – even in a hotel room, as long as you have access to an ice machine and a percolator.

Iced tea isn’t really a cocktail but it is something you can drink large quantities of without damaging yourself. The great thing about making iced tea at home is that you can make it just the way you like it. I like it unsweetened and with added citrus. Here’s how I make it. 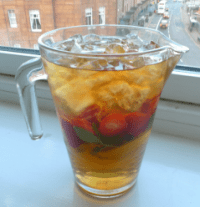 Margaritas are quintessentially American to me, probably because I have them with Mexican food and I like to eat a lot of that in the US. It’s odd, but there you are. I love 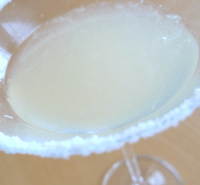 Frozen margaritas are more visually fetching but not as potent as neat ones.

Margaritas, both on the rocks and frozen. A few weeks ago, EF and I attended an event hosted by Cointreau where I was reminded how easy Margaritas are to make: they are equal parts lime juice, triple sec (read Cointreau) and tequila. Shake over ice and either stick in a blender to make a frozen Margarita or pour into a glass, neat or on the rocks. Neat it’s quite potent; on the rocks its less so and frozen it’s diluted and considerably safer. The salt rim isn’t really necessary but in a hot climate, the extra salt is welcome. We had a great pitcher of frozen Margarita in Nashville, sipping it to cool down as we nibbled fresh corn chips with that thin salsa that works so well as a dip, queso and guacamole.

We had Mexican in Dallas as well, but the first night we were there, we had pizza. We then moosied over to a pub where they had lots, and lots of beer. Something went very wrong with an order and after much confusion we found that the lovely beer C had enjoyed wasn’t an IPA at all (which explained why it didn’t taste like one) but a kind of cocktail called a dogbite. If we’d known that it was half Newcastle Brown, half Ace pear cider, we wouldn’t have bought it. But we didn’t, so we did. It was really, really nice. Beery, but also fruity. Fruity, but with the usual pear cider sweetness tamed. And so easy to make.

Fireside Pies in Dallas is my friends’ favourite pizza place and I liked it too. I enjoyed the snow crab claws in garlic butter as much as my half-and-half fresh & crispy/proscuitto pizza. The thing that really stayed with me was the drink I had.

I’d never heard of a grapefruit or – or any other – rickey before. It is a refreshing blend of liqueuers and juices and goes well with pizza but is equally delightful at a poolside. Or at home, in front of the television. There are several different recipes for grapefruit rickeys online, but this is what’s on Fireside’s list of ingredients and in the quantities that I saw (by chance, I promise) the barmaid put together. 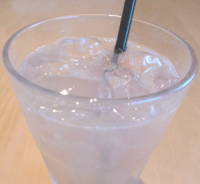