Teens drive in for Scottish Food 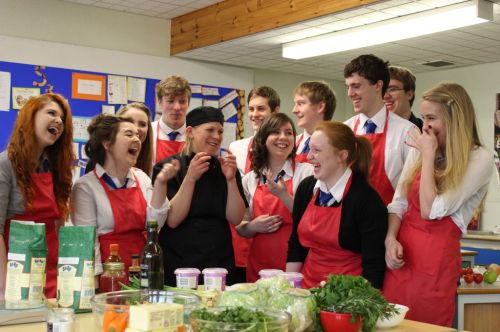 For the last few weeks, hundreds of cars have been snaking into the Krispy Kreme take away in Edinburgh. It’s hard to understand the charm of a sweet, calorie filled, expensive doughnut. But maybe it’s the drive in that’s part of the appeal?

Diners who live in an around Linlithgow had the unique opportunity starting Monday 25th March to drive through a pop up restaurant and purchase fabulous Scottish meals.

Whilst Drive Ins might be seen as the preserve of the big chains such as Krispy Kreeme and McDonalds, this didn’t daunt our intrepid students. Sixth years from Linlithgow academy not only built a drive through, but are ran the take away business and cooked all the food at the Teen Canteen. 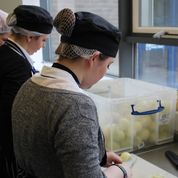 Teen Entrepreneurs in the Kitchen

For an experienced chef, creating a new food business from scratch would be a big project. For school pupils, some of whom could barely make pasta, to do it in only a few months was a huge undertaking.  Having discovered that their school’s kitchen was unused after 2 pm each day, the ideal of running a restaurant was born. Why not guilt free take aways? Their food mentor, Fi Buchanan, showed them the secrets of Scottish food, as well as very practical tips on how to survive a busy service in a commercial kitchen. Hamish Taylor, the ex-CEO of Eurostar and Sainsbury’s Bank has been closely involved. All their efforts are getting filmed for the BBC.

Many food industry professionals have generously given their time. These include Tom Lewis of  Monachyle Mhor, who taught them about great Scottish produce, Scoop Event Design Company with their mobile kitchen, who have proven that a pop-up food business can really work; The Bakery Dunbar who taught them the importance of involving the community in the project; and Chunk Digital who advised in creating the website. 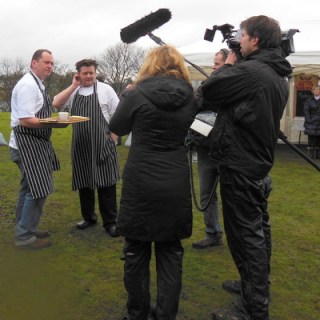 A New Generation of Foodies

Local chefs Neil Forbes (far left) and Mark Greenaway (to his right) relished the opportunity to mentor the students in advance of their participation in the Soul Food Takedown and in preparing the dishes for the pop up restaurant and kindly gave up their one day off a week to help.

The event took place at Linlithgow Palace, where for £10, visitors could taste 10 different dishes from 10 different chefs (including two stands run by Mark and Neil and their students).

Having spoken to both of the chefs separately today, Mark and Neil both described how encouraging and rewarding it was to see the students begin to understand the importance of local food, how to prepare it and become enthusiastic about the tastes and flavours.

Mark described how one student was repelled by fresh fish in his restaurant at first, particularly the crab and langoustine that were still alive. She turned into a big fish fan was very willing to get stuck in.

Mark welcomed the students into his restaurant kitchen to discuss options that are tasty and would fit in their budget. Deciding on kedgeree, he showed the students how to make the dish and asking them to take notes as he would his own chefs and chatted about how cheaper cuts can be used to great effect. The next day, they prepared as much as possible for the event and went on a shopping expedition to buy spices and it was over to the students, who prepared almost all of what was required  for the event in advance. 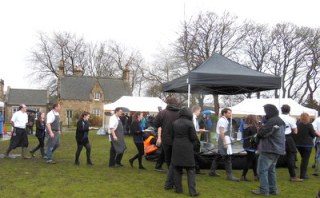 A parade of chefs at Scottish Soul Food Takedown

Neil described the importance of sourcing fresh local Scottish produce, and about the business side of running a restaurant and how to organise themselves. He soon got them preparing the ingredients for a pot of stew and mash. “Their faces lit up after about 10 minutes. It was wonderful to see”. They made 4 portions of stew  that day, then went on to prepare enough for the Soul Food event without further assistance.

All the months of preparation and the enthusiasm of all those involved will make the Soul Food Takedown a great success. With Neil’s student team being judged 4th alongside professional chefs!

It’ll be fun to see the final film which air in Autumn 2013. The drive through was great success, with food selling out each night. The students are now spending their last few months at school before they spread their wings. Neil and Mark are hoping that some of the students will be inspired to cook at home and perhaps become stars of the kitchen in the future. 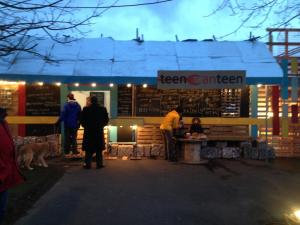