Tom Kitchin shares his inspirations at the National Library of Scotland

Kirsti Wishart lives, works and eats in Edinburgh. Her short story, The Pleasure Palace, can be found alongside Caroline’s in ‘The Seven Wonders of Scotland’ anthology published by Birlinn. It features cake. A lot of cake. She went to the National Library of Scotland to see Tom Kitchin talk of what inspired him in his professional life.

Tom Kitchin’s appearance at the National Library of Scotland as part of their Inspirations strand left us in no doubt that he places a far greater emphasis on being a ‘chef’ rather than ‘celebrity.’ In an entertaining hour he expressed the hard-work, dedication and excitement about food that has led to a Michelin star and TV cameras tapping at the Kitchin door.  Interviewer Edi Stark expertly guided him through the Desert Island Disks format in which the guest discusses what inspires and informs their life and work. The end result proved an excellent tutorial for any wannabe chef. Kitchin’s first inspiration was the legendary Auguste Escoffier, cited as establishing the roots of a culinary family tree stretching up to through the decades to encompass such trailblazers as Anton Mossiman, the Roux brothers and Kitchin’s own mentor, Pierre Kaufmann. Admiring as he was of the creator of such classics as the Peach Melba and Duck á l’orange, when moving on to what he termed ‘The Fundamentals of Gastronomy’, Kitchin emphasised the importance of chefs mastering such essentials as a good chicken stock rather than succumbing to such distractions as ‘parmesan foam.’ Learning the basics not only prevents a chef becoming lazily reliant on expensive ingredients but provides a valuable underpinning in these financially straitened times. Anyone (almost) can cook a fine steak well but it takes true skill and application to make a Michelin-starred meal out of pigs’ trotters. 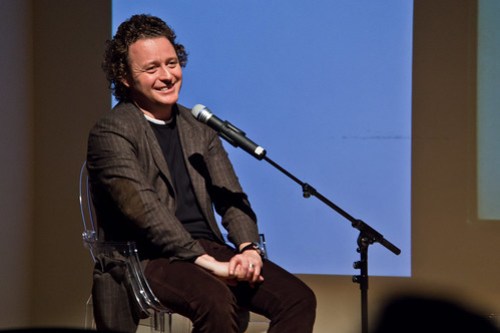 Tom Kitchin talks about his inspirations at NLS

Discussing his own training, Kitchin granted an insight into the strange, occasionally terrifying world of the professional kitchen. This is near-militarised environment where socks have to match, plaques to Escoffier are cleaned with a toothbrush and woe-betide anyone foolish enough to plate the thickest part of a sea-bass to the right rather than to the left of the plate.

The inspirational produce of Scottish suppliers led inevitably to a discussion of the horse-meat scandal. Kitchin saw it as potentially beneficial to the Scottish high street as consumers seek greater knowledge of their food’s provenance.  Thrown on to the mercies of the supermarket shelves when his own restaurant was shut in January and couldn’t be used as his personal larder, Kitchin revealed his sympathy for those of us who see a trip to a Farmer’s Market as a treat rather than an every-day occurrence. He then gave us a glimpse into his creative process, describing the journey of a meal from rock-pool to customer’s plate, starting with the inspiration provided by a supplier on the Isle of Bute picking unusual varieties of seaweed at low tide via a Gullane beach walk with his young son.

While the final inspiration, football, may have lacked culinary content, after hearing about days lasting from 7am to 1am, a desire to spend at least some time away from the ovens seems not only understandable but essential. Further highlights included the name of his new pub in Stockbridge being exclusively revealed as ‘The Scran and Scallie’ and letting us in on the trick to get unadventurous customers sampling dishes they might otherwise avoid – sell ‘em cheap. We were also advised that rather than saving up your pennies for a three-star restaurant where the chef is more likely to be busy with their media commitments than in their kitchen, you’d be best to visit a one or two star restaurant where the chef is pushing to achieve that next star. It’s there you’re likely to experience the meal you’ll remember for the rest of your life. Now, if you’ll excuse me, I’m just about to book a table in a certain restaurant in Leith… 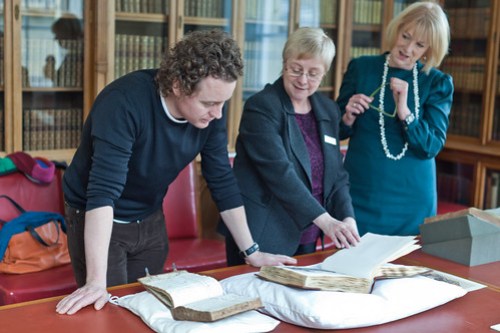 Find out about other events in the Inspirations series on the NLS website.

Photographs by Chris Scott, used with kind permission. (See more of Chris’ photos from the even on Flickr.)