Mark Greenaway – All for the love of food 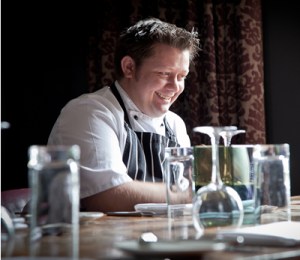 I am sitting with Mark Greenaway in his Edinburgh Restaurant and we’re talking sous vide (a current obsession of mine).  I’m yet to try cooking vegetables in the water bath. Mark is describing carrots slowly cooked in butter with a star anise for 2 hours, then blended (minus the star anise). “It’s mouthwatering – tastes exactly as if it’s made with cream” and then describes his current favourite ingredient, skate sourced from Aberdeen also cooked long and slow.

He used sous vide extensively at Dryburgh Abbey, in the Scottish Borders before setting up his eponymous restaurant in Edinburgh. At Dryburgh, he not only revived the overgrown 2-acre kitchen garden, working on it between split shifts, but quickly achieved two rosettes for the high standard of cooking. Now, he and fiancée Nicola are relishing their new challenge in Edinburgh and are only slightly missing the fact that they won’t see the garden’s second season. Why Hawke & Hunter? A chance reunion with Barrie Brown who owns Hawke & Hunter set things in motion (they originally met on the school bus at age 13!).

Mark’s menus which include such wonders as duck with hot orange jelly and a glorious spring inspired pea and mint with hot pea jelly made with gellan gum (derived from seaweed) have justly received high praise from many quarters and won him Rising Star Chef of the Year Award in the Scottish Hotel Awards within 6 weeks of opening. I was intrigued to find out inspires him for myself. 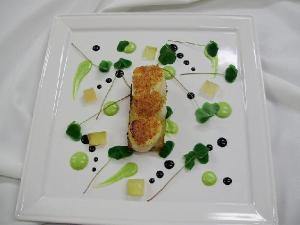 Reviewers do like to label a cooking style and often, if the food is a little experimental it will be categorised “Heston Blumenthal” style. However, Mark explains that he’s really inspired by American chefs including Grant Ashatz at Alinea, Willy Dufreine at WD50 and Thomas Keller at the French Laundry among others. “They are pushing the boundaries in a refreshing way that really excites me. They have such a fresh way of looking at food”. It’s clear also that 5 years spent in Australia at some of the most talked about restaurants inspired him and Darrel Felstead chef in particular (now of Foveux) whom he worked with at the GPO Restaurants Sydney.

Mark originally trained as a pastry chef before becoming a more “general” chef (his description!) and head of his own restaurant. I think the precision needed to create great desserts helps fuel creations such as cannelloni (actually tubes made from filo pastry) with beef marrow you can see Stefano, one of his chefs creating in our photos which need such attention to detail. His team of chefs are multi-talented – every 6 weeks they move to a different station in the kitchen, from starters to deserts and so on – Mark has an eye on developing their skills further.

Creating cannelloni with a difference

Mark’s cooking is definitely led by the seasons, but it is not something that is constantly referred to on the menu. He prefers to list his suppliers (including Welch’s, Wild Tastes and forager Ben Robertson from Fungi & Forage) on the menu but not by each dish. He’s sourced some prime local ingredients, but is still searching for more “consistently good” Scottish cheeses  – suggestions anyone?  He’s also happy to go a little further afield to make the most of British ingredients such as asparagus – some 3 weeks ahead of our own local supplies.

What’s next on the menu? 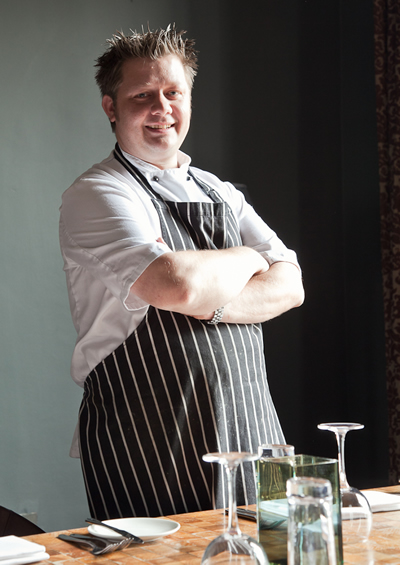 So what’s next on the menu? Mark’s looking forward to taking part in the Taste Festival (1st to 3rd July 2011). He is busy planning the logistics of creating the 3,000 portions he’ll need to create for food lovers. And if Mark’s got anything to do with it, you might just see one of the American chefs taking a guest spot in the restaurant.

Photographs in this post are copyright Brendan Macneill 2011 with the exception of the food photograph, copyright Mark Greenaway