The Honours – surf and turf 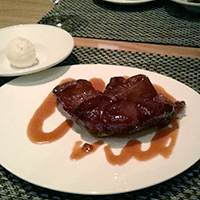 …but the tarte tatin stole the show. Hands down.

I had the fortune to interview Paul Tamburrini last year, before The Honours opened. Conceived as a more relaxed, casual dining experience than Martin Wishart’s eponymous restaurant in Leith, The Honours is a high quality brasserie on North Castle Street. Six of us got together a couple of Saturdays ago to celebrate a birthday and The Honours was the restaurant of choice.

The Honours is a hopping place. We had a two-hour slot (which stretched to two hours and forty-five minutes) and arrived at 18:00 on the dot. We perused the menus over cocktails in the bar. The menu was very tempting and had an interesting variety of dishes but I decided to go for classics: half a dozen oysters to start and a beef fillet with Bearnaise sauce and tomato salad for mains. I didn’t really put the bartender to the test either: I started with a kir royale. A very good choice, if I say so myself. And easy to carry to our table. 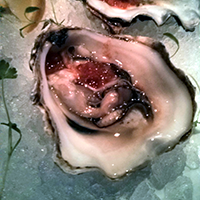 Plump and sweet. My favourite oyster.

The oysters were plump and fresh, perfectly clean – thin shards of shell in your oyster is horrible – and complemented by little dabs of frozen Bloody Mary. The subtle heat of the Bloody Mary enhanced the sea flavour of the oysters. C had a spelt risotto with mozzarella while other members of the party had prawns Mary Rose and jamon belotta.

C and I went to Vienna recently and have been drinking Gruner Veitliner at every opportunity since we came back. We were pleased to see one on The Honour’s wine list and it went very well with the oysters. With the main, I drank a Malbec. We had the window seat and got a good look down the long 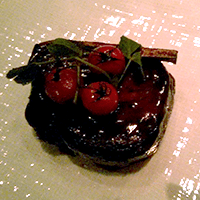 This doesn’t look nearly as epic as it was. Fillet. From heaven.

I had asked for my steak rare so it was larger than everyone else’s. The Honours serves their fillet steak on the bone. it has been dry-matured for 28 days and is darkly flavoursome and juicy yet bloodless. It’s brushed with a house marinade and finished with a glaze. I’m sure the steak would be just as good without the glaze – I don’t think it needs the added sweetness – but I enjoyed every morsel of my steak. The salad of cherry tomatoes, shallots and basil was fresh, and I tried a bit of creamy Dauphinoise, and a couple of crisp French fries. C had the gnocchi and there was also a sea bream a la plancha on the table. (There were vegetarian options were but they were not the most imaginative. Gnocchi, pasta and risotto. At least there wasn’t cauliflower.) 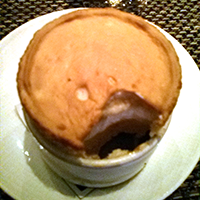 Since my last visit to Michael Neave’s I’ve started having soufflé. A good soufflé is a lovely, airy thing and it seems they are quite fashionable at the moment. (Or maybe I’ve just had my eyes opened to them: I keep seeing sweet soufflés on menus.) The flavour du jour was pink grapefruit. The dessert that came out was as light and tall as you could wish for and had a very subtle grapefruit flavour.

C shared an apple tart tatin with a friend. It was perfect. Golden, sticky, soft and crisp all at once. If the other dishes hadn’t convinced us, we might still have gone back for the tarte tatin. The cinnamon ice cream that was served with it was rich and delicious.