MacSween Haggis Bible: recipes that go beyond neeps and tatties

Yes. I live with a vegetarian. And yes, I like haggis. I like the meaty, sheep’s stomach, bits of blood and guts version. I also really like the veggie version. Particularly MacSween’s veggie haggis. A good few years ago, you could buy wonderful Indian patties filled with vegetarian haggis from Mrs. Unis’. I’d stop off on my way home from work and get some when I felt lazy. They were divine. There were also lovely vegetarian haggis samosas. So, when I came across the Macsween Haggis Bible, a dinky little cookbook of haggis recipes, I was very pleased indeed. 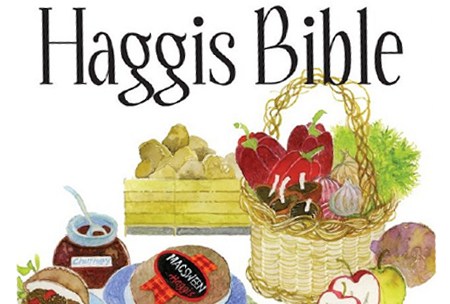 It’s not a big book but it does have 50 haggis recipes. If you don’t like meaty haggis, or if the thought of traditional haggis ingredients distress you, try the veggie version. Oats, nuts, beans and other kinds of good stuff are mixed together into a savoury pudding. It’s tasty, and very filling. It’s difficult to make haggis into fine dining – although haggis balls come close  – because it is quite stodgy. But there are things you can do. I make a rather wicked haggis and filo pie (layers of crunchy file pastry around a moist veggie haggis with a centre of onion marmalade), and C. makes a tasty haggis dinner with mash and mushroom sauce. But there’s more to haggis than that.

Jo Macsween shows that haggis can be used as a filling for ravioli, or be made in to quick and tasty tacos. I’m also keen to try out the recipe for haggis tattie scone, a great way of using up leftovers, maybe even turning them into a hearty breakfast.

The book’s divided into sections, starting with the “holy trinity of haggis” – haggis, neeps and tatties – and moving on to breakfasts, main meals, veggie delights, snacks  and snackstrels, and finally, party treats. I went straight to the veggie section and was rather pleased to find a recipe for Caledonian pakora. It’s an an easy and tasty recipe. 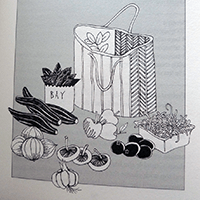 The illustration for the Veggie Delights section

Each section is illustrated with drawings by Bob Dewar. They are fun and cute. There’s no glossy photos in this book, but I don’t think it needs it. The recipes are rarely so complex that you need them.

Many of the recipes are re-workings of dishes we know well, using haggis as a new ingredient. It’s good thinking. I miss cottage pie but I hadn’t thought of using haggis – veggie or otherwise – to make it. The same goes for lasagne  There’s also a recipe for haggis bobotie, a rather genius idea, I think, since bobotie can be a little on the sweet side in its original version. Although there’s a separate veggie section, several of the meat recipes can be made with vegetarian haggis too (and vice versa).

It’s a great little book that makes you think about ways of using haggis as an ingredient. The suggested retail price is £4.99 and I think it makes a nice gift, especially to visitors or people who are new to haggis.

on Amazon if your local bookshop doesn’t carry it. Their haggis you’ll find in most large supermarkets and many small retailers.