A Re-education in Oats with Nairn’s

I used to think that oatcakes were a dry, dusty, bland, biscuit-esque disappointment. An oral punishment that sapped moisture from your tongue and left behind a claggy, crusty detritus. For a long time I did my best to avoid them. I only came into regular contact once I started working at Union of Genius, where we offer them as an alternative to bread.

And even then I still viewed them as an inferior substitute.  But everything changed the other week. I went to Restaurant Mark Greenaway for an event by Scotland’s best-known oatcake brand, Nairn’s. And now I stand before you, a convert. 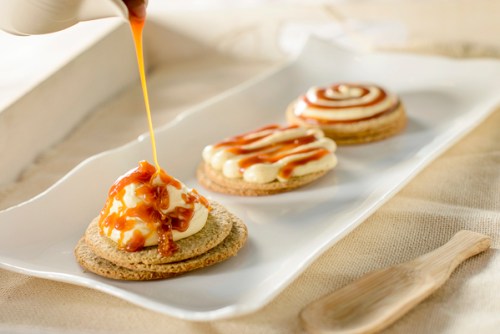 Nairn’s have baked oatcakes for over an hundred years, so they know their stuff. Now they’re on a mission to make us think differently about the humble oatcake, teaming up with Mark Greenaway to showcase their versatility. News flash! Cheese and chutney is so 2014! As Mark demonstrated, the oatcake is certainly capable in the canape arena. (Albeit with some caveats.)

We sampled an impressive yet simple-to-make selection of toppings. To start there was a prawn cocktail and a Waldorf salad. They would both make an excellent light lunch, containing just the key elements of the classic dishes, perched atop a lettuce leaf and, obviously, an oatcake. (In case you’re interested, it was a ‘rough’ oatcake, although Nairn’s produce a wide variety, including ‘fine’ and gluten free. But our Mark likes it rough.) 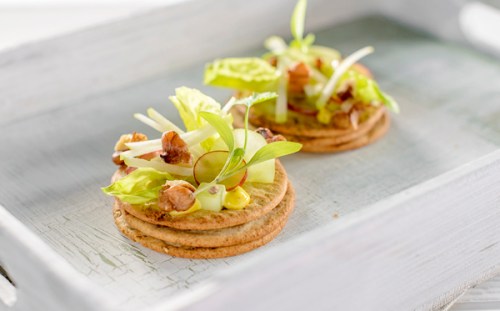 Mark then rustled up a chicken roulade with Caesar dressing, which seemed to involve several miles of cling film to hold the meat together during boiling. The slices of moist chicken and a shaving of rich, tangy Parmesan were a satisfying combination. However, whilst I’ll accept the oatcake is deserving of more than just a smear of cream cheese, I’m not sure I would go to the effort of a roulade. 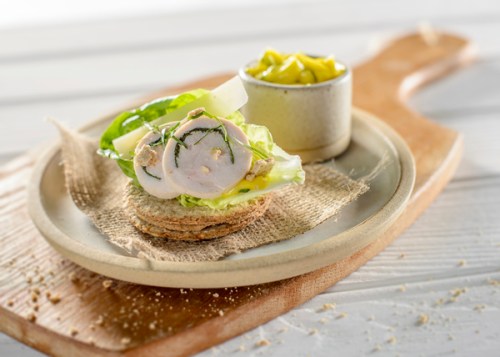 Next up, we had haggis, neeps and tatties. I’m afraid that even shaped in to a quenelle by the hands of a TV chef, haggis will not be winning any beauty awards. But the traditional Scottish elements of oats and haggis were a very complementary flavour combination. We finished with a peanut caramel cheesecake, where using an oatcake instead of a biscuit base worked well to reduce the overall sweetness of the topping. 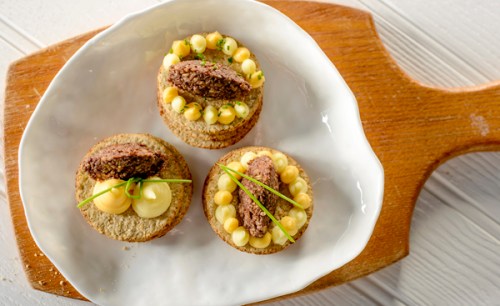 After this series of delights, I was left certain of two things. Firstly, that I too could reap the rewards of oatcake creativity. Secondly, that oatcakes do not make good canape bases. Flavour-wise, sure, no problem – but it’s really tricky to make polite conversation after biting into one. Too wide to shove it in one go, they tend to crumble and collapse, leaving you no choice but to cup your palm and shove the remnants into your mouth. Not a good look.

As we left our hosts gave us each a large bag of oaty goodness to take away. So I’ve been enjoying treats such as chocolate chip oat biscuits and cheesey oat snack crackers. The biscuits were slim and crunchy with enough chocolate to make them sweet and moreish and the crackers were reminiscent of Mini Cheddars, but much classier. Both were lower-calorie than oat-free alternatives and as oats leave you feeling fuller for longer I’d be happy to choose them as a ‘safe’ snack to keep in the house.

So was I wrong to hold oatcakes in contempt for so long? I think I was. They’re resolute wee things, really; elegantly slim, unashamedly pallid and robustly crunchy. Try one. Prove me wrong. Just not in polite company, please.

Nairn’s oatcakes, biscuits and crackers are available in most supermarkets and independent shops. Recipe ideas can be found on the special boxes of rough oatcakes featuring Mark Greenaway as well as in an earlier Edinburgh Foody post by Caroline.

Amy sampled the oatcakes at the invitation of Nairn’s and Restaurant Mark Greenaway. Photographs are courtesy of Nairn’s