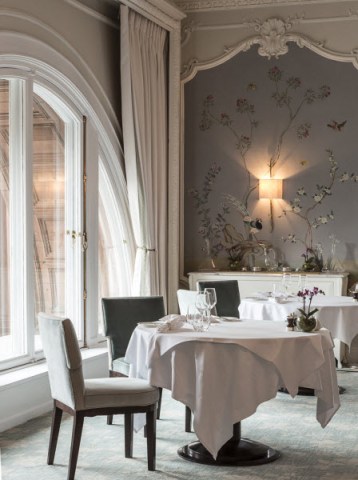 We’re standing in the The Pompadour by Galvin Restaurant at The Caledonian, a Waldorf Astoria Hotel in Edinburgh. It’s a room beloved of many Edinburgh residents who have partaken tea there over the years. Now it is an elegant, warm room decorated in pastels and includes the original Chinese panels.

“Over there”, explains the Restaurant Manager Nicholas Baxter pointing to a table with a view over the castle, “There will be a proposal tonight, complete with violins. The couple are flying in from Majorca specially”. It’s a place of dreams.

All too often, when we’ve visited behind the scenes, you move from beautifully decorated, spacious dining rooms to very cramped kitchens. Chefs have to dance round each other in very tight spaces.

We’re here to meet Craig Sandle, executive chef. He welcomes us into a spacious, superbly equipped kitchen. The “us” this afternoon is myself and photographer, Brendan MacNeill. We’re introduced to the team and watch preparation for the night’s menu.

We’re in heaven as we shadow his brigade making patisserie, pasta, prepping meat – all the sorts of tasks you’d expect when a busy Saturday night’s service is just hours away. We ask dozens of questions and discover great enthusiasm within everyone we speak to. Both for the dishes and for Chef who is clearly a great mentor.

But our focus today is the preparation of a very special dish for two.

If you watched the Great British Menu for Comic Relief, you will have seen the dish created by Richard Bainbridge – a huge balloon-like red nose with chicken within. This was a version of the poulet en vessie that we are going to watch being created today. A new word has come into our culinary language. Exactly what is a poulet en vessie?

In London, the Galvin’s are well known and revered. Their passion for all things French is evident in their food. What might not be so much well-known, is their determination to use the very best local ingredients wherever possible. This is true in their first restaurants outside London at the Waldorf Astoria. Craig explains that they carried out plenty of research here and abroad to find the best ingredients. He discovered the star ingredient of the dish at St Brides’ in Strathavon. He took his brigade off to the farm recently, to understand just what goes into creating a very tasty bird. “The taste really is exceptional”

Creating the “Chicken in the bladder” 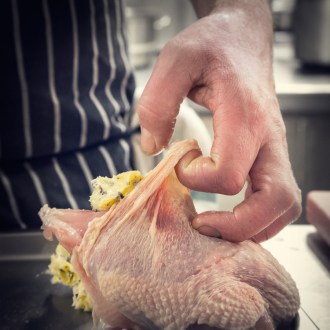 Butter added under the skin

The term “en vessie” means cooking in a pig’s bladder. This is actually a forerunner of the now-fashionable sous vide or water bath. The bladder is the vessel in which the meat is cooked ensuring it remains very moist and tender. The Pompadour kitchen has plenty of the most modern equipment and Craig emphasises that they use both traditional and modern techniques, choosing the most appropriate for the dish.

When the bladders arrive in the kitchen they are completely dry and have the appearance of parchment paper. These are then soaked to restore the suppleness before using. Whilst the bladder is soaking the preparation of the chicken begins.

The legs are removed from the bird and set aside to create a ballotine. The chicken is then soaked in brine for 4 hours. A mix of butter, seasoning and morels is gently inserted under the skin of the chicken. The bird is squeezed into the bladder, tied tightly and placed in a large pan of stock and vegetables to simmer on the hob. It’s frequently basted to start with and the bladder starts to inflate – it bobs about on the top of the stock like a buoy. 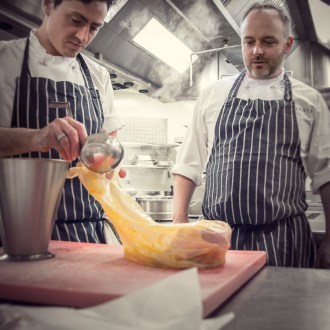 I make this sounds so simple and speedy. In fact, it’s a time consuming delicate process. The first bladder that’s used proves to have a hole in it, so back to the beginning. And, as the kitchen isn’t as hot as during service it takes longer to inflate and to maintain inflation.

The vessie is covered and left to cook gently, and checked regularly for 40 minutes.

For serving timing is everything. It must arrive at the table still inflated in all its glory. The sauce and vegetables must be ready to serve. As it’s 5 pm and there are no diners yet, we all head off into the restaurant with the dish on the trolley to see it served in the elegant room. 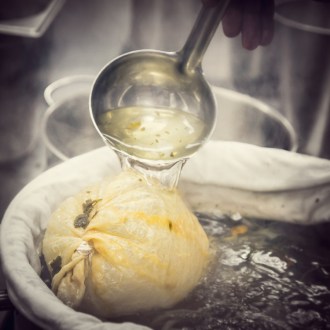 Restaurant Manager Nicholas explains how the dish is cooked to our “pretend” diners and how he’s going to serve it. As he breaks open the bladder and removes the chicken a wonderful smell escapes.

Then Nicholas gently carves the breast from chicken and removes the skin. With split second timing a chef from the kitchen arrives with the piping hot accompaniments to complete the dish. He adds the ballotine and vegetables. To complete the dish the fois gras sauce is poured over gently. A fabulous, delicious dish perfectly made for two. I wonder if that’s what the proposal table ate? I’ll have to ask. 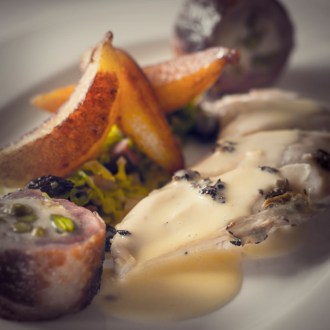 Brendan and I had such an enjoyable afternoon, we felt so reluctant to leave. The food is of the very highest quality, of course. We particularly enjoyed the attention to detail at every stage; the sourcing of prime Scottish ingredients – you should have seen the scallops, but in particular how Craig inspires his team to achieve the highest culinary standards. I promise I’ll write more about other aspects of our visit another time.

About Craig Sandle
Edinburgh-born Craig Sandle joined Galvin Restaurants to head up the kitchen of the fine dining Pompadour by Galvin and Galvin Brasserie de Luxe in August 2012. He returned to his city of birth 15 years ago, and has since worked in a handful of establishments, most notably as Head Chef at Michelin-starred Restaurant Number One at Edinburgh’s Balmoral Hotel for nine years. He was instrumental in gaining its first Michelin star and retained this accolade for eight consecutive years. He was an Acorn Award winner in 2005, Craft Guild of Chefs Restaurant Chef of the Year in 2008, a finalist in the 2006 National Chef of the Year and winner of Copa Jerez British Final. Craig was also a member of the Scottish Culinary team for four years. During that period the team won several medals including three gold medals at the 2001 World Culinary Grand Prix. He prides himself on developing his team and providing people with opportunities to grow. His menus are inspired by seasonal Scottish and French ingredients.

About The Pompadour by Galvin
The Pompadour by Galvin officially opened its doors in September 2012, the sixth instalment of brothers Chris and Jeff’s rapidly expanding empire and their first ever Scottish venture, adding an exciting new dimension to the much celebrated London collection. It takes its name from the celebrated Madame de Pompadour, the favourite mistress of King Louis XV of France, who installed her in the magnificent Palace at Versailles. The listed interior décor reflects the sumptuousness of the royal court of the day, and the restaurant has long enjoyed the reputation of having the best tables in Edinburgh, with impressive views looking out onto Princes Street and Edinburgh Castle through the panoramic arched windows. The grand old lady of Edinburgh restaurants has undergone a painstakingly delicate restoration process as part of Hilton Worldwide’s £24 million rebranding of The Caledonian, originally a Victorian railway hotel, into one of their five-star Waldorf Astoria establishments.