A Room in Leith has moved to new premises

A Room in Leith has moved! As of May 20th, 2013, its new premises are just across the road from their previous location so they still have a great canal-side outdoors seating area and nice views from inside the restaurant. A great new addition is the conservatory, which seats up to 20, and has a lovely view over the terrace and the canal. (And, if you like modern architecture, the Scottish Government.)

A couple of weeks ago, I visited A room in the West End with a friend I worked with years ago. In an attempt to catch up with people before summer whisks them all away to exotic beaches, I went for dinner with another colleague from those days at A Room in Leith a couple of weeks later. A Room in Leith was across the road from Mithas, in a charming building with a pontoon on the water. Their move takes them to larger premises and should not be difficult to find for anyone familiar with the old premises. Teuchter’s Landing, which previously had the front of the building while A Room in Leith was at the back, will fill the space. 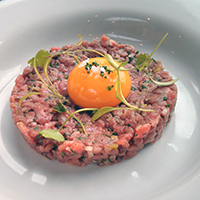 Look at that: beautiful steak tartare.

I’m a bit of a fan of French cooking and having grown up in Sweden, I’m unafraid of uncooked meats. So when I see steak tartare on the menu, I order it. Pretty much every time. The steak tartare at A Room in Leith comes already mixed but keeps things straight and simple. It’s a luscious mixture of egg yolks, good beef, mustard, tiny cubes of red onion and capers. I tried to eat it slowly, to really enjoy every morsel, but it was difficult. It was just so good!

My colleague, who isn’t a fan of red meat, had mackerel mousse and mackerel fillet. The mousse was just as good as the Arbroath smokie  paté I tried at A Room in the West End, and the fillet was cooked just right. 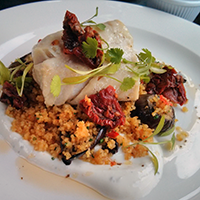 Coley and couscous – meaty yet light

Because I had raw, red meat to start, I decided to have fish for my main. Picking a meal from a menu, it’s easy to get carried away and have all your favourite things. I try to get some kind of balance (although I often end up having fish and fish). There were several options, including a pot of mussels, and the lemon sole with scallops were tempting but I opted for the coley fillet with courgettes, sunblush tomatoes and a mint and yoghurt dressing. Coley has been having a come back over the last couple of years and it’s interesting – not to mention good for the environment – to see a greater variety of fish on the city’s menu. In Leith, you expect interesting fish on the menu and A Room in Leith does not disappoint. The spicy couscous worked well as a follow-on from my starter. The tomatoes were spicy-sweet and the dressing refreshing: the dish had a meaty feel without being too filling. 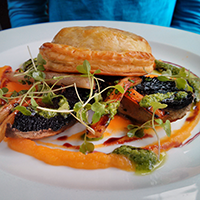 My companion gave me an amusing run-through of each of the dishes and what she liked and what she didn’t. One of the things I really enjoy about eating with friends is what I learn about them and their liked and dislikes. It’s not just C. who’s not keen on cauliflower. In the end, she went for the vegetarian haggis, butternut squash and chickpea bridie with salsify, mushrooms, red wine reduction and an almond pesto. That’s a lot of ingredients but they came together into a hearty and satisfying dish. It was also really pretty. The pastry was flaky and crisp and the almond and basil pesto was a nice touch. 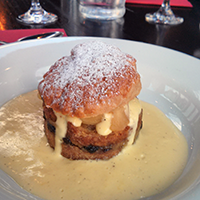 I was very excited when I saw scone and butter pudding on the menu. What a lovely idea! It was also very nicely presented, with the scone lid fluffy and soft, while the rest of the scone was layered with juicy apple and cinnamon. It was a delicious island in a sea of Calvados custard.

The chocolate frenzy was more controlled than the name might make you believe. A small chocolate muffin, chocolate créme brulé and cardamom parfait made for an elegant and well-balanced plate.

A Room in Leith, like A Room in the West End, is a great place to go to catch up with friends and have a good meal. There are great range of interesting meat and fish dishes, and this is one chain that take some time to think up interesting vegetarian options. A Room in Leith’s fish platter, a great feast of fish, I want to come back for because for. It’s got an interesting mix of cold and warm seafood and while there’s no lobster on there, there’ salsa verde to jazz up your coley and salmon kebab. With the outside space, it’s also a great place to spend an afternoon. I can see myself going to A Room for lunch of a weekend and migrating across the road to Teuchter’s Landing to sit on the pontoon to enjoy the sun and a glass of lemonade. 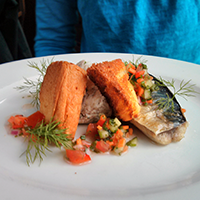 A Room in Leith