Make your own lemon liqueur

Dubrovnik city from above

Dubrovnik is an extremely busy place, huge cruise ships arrive day in day out in the summer. In the walled city, tourists throng through the streets which are all pedestrianised. Visitors soon find that they need very strong legs to walk up and down the steep steps to where many of them are staying. 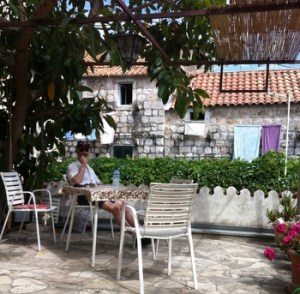 Chilling on the Terrace

We stayed in a cosy, welcoming apartment up one set of steep steps. There were plenty of thoughtful touches, but the very special thing about it was the terrace atop. From here, we could glance into the other courtyards of the mish mash of houses below, whilst sitting in the shade of a very large tree. Peace in the middle of the hustle and bustle.

One afternoon, we decided to walk the walls. We left it as late as we could, but we were advised it could take 3 hours to walk round and closing time is 7:30 pm.

I don’t know what you’d expect from walking the walls. Plenty of history perhaps? We had no guide, who might well have told us the stories so we simply absorbed the wonderful views: off out to sea and over the city. 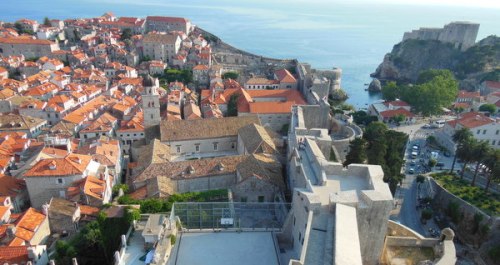 Walking the walls is not for those with vertigo

Looking into the city is curiously intimate. As you walk round the walls, you look over into courtyards and cafes, terraces similar to our own, dipping into people’s lives not dissimilar to where we were staying. 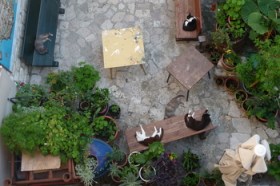 It’s a hard life as a Croatian Café Cat

There are lush little pockets of gardens, numerous cats bathing in the sunlight and a glimpse here and there of a kitchen, families eating at tables. On many of the windowsills sat different sized and shaped jars. We’d noticed these from our terrace and wondered what they might contain. They each appeared to contain some sort of fruit and possibly a layer of sugar. We were intrigued and started asking questions.

Croatians, it appears, are very keen on liqueurs. On arrival at our apartment, our friendly landlady offered us Griotte or Kraš (sour cherry liqueur) and the local grappa or rakia – both were delicious! The Maitre D’ at 360 Restaurant explained to us how his mother would pick green walnuts and steep them in Rakia, a high proof alcohol that is made from the skins of the grapes left over from winemaking. The jar would sit on the windowsill all summer, then sugar syrup would be added to taste. The walnut liqueur, Orahovica has a flavour reminiscent of vermouth with bigger, stronger overtones. I’ve not been able to find out the difference the sun makes to the maceration. Recipes I’ve read all seem to suggest keeping the liqueur in the dark!

In Konoba Komin restaurant on the island of Korcula, we discover that the waitress, who was also a trained pastry chef, makes many different liqueurs. A particular favourite of hers is figs. Again, this is steeped for months then sweetened. “But not too much” she adds with a smile. She presses us to try some – it’s delicious. 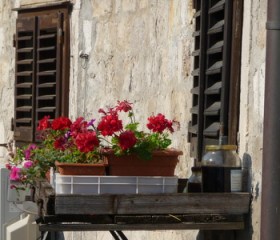 Croatian Liqueur in the Making

Lemon and orange trees grow abundantly in Croatia. Whilst we didn’t see any orange liqueur, we did see lemon peels gently soaking. We were given lemons on Šolte and on Korčula islands and these were added to my suitcase for the home journey.

I just had to make my own lemon liqueur – sometimes called limoncello. As I had no Rakia , I used vodka and it sat in the greenhouse to make believe it was Croatia. So here’s my recipe. Do seek out unwaxed lemons, I spotted these in Asda only this week.

Update October 2013. Well, what a summer! The limoncello baked nicely throughout the summer and into the Autumn. I’ve just sat tasting a little – it’s delicious! 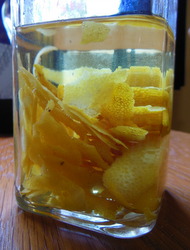 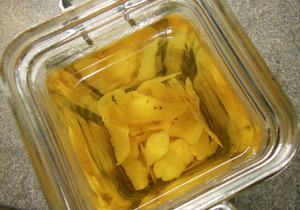 For the sugar syrup 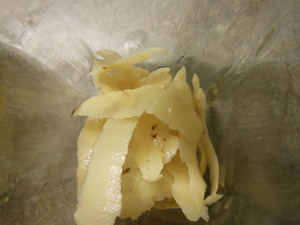 No colour left in the lemon peel 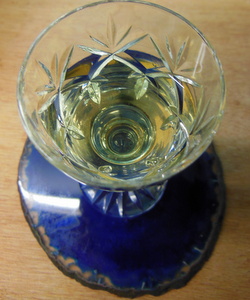 Limoncello well worth waiting for!

A lovely blog post on making Walnut liqueur from Box of Stolen Socks.

We found our accommodation in Dubrovnik through Airbnb.co.uk