Teuchters: A home from home welcome 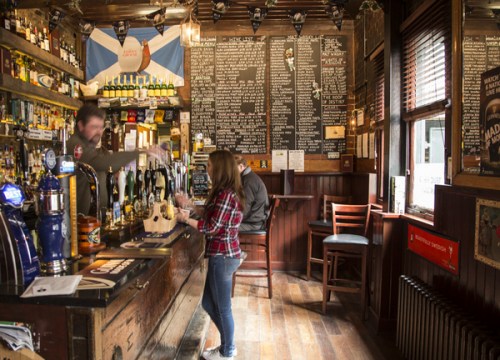 A warm welcome at Teuchters

Having grown up in the south of England, I became very used to a certain sort of pub. Not posh, not trendy, just somewhere welcoming where you could enjoy a drink or two. On coming to Scotland, I’ve never quite found the equivalent drinking establishment. Teuchters has changed my mind.

It was set up some 7 years ago by two Highlanders Peter Knight, who originally hails from Halkirk near Thurso and John Tindal, from Airlie near Kirriemuir. Not sure of what to call the place, they opted for Teuchters after a comment from John’s brother. An ironic touch perhaps as this expression is used lowland Scots to describe someone from the Highlands, and not always in a complementary way. John and Peter came up with the concept of the  Room in restaurants in the West End and Leith and opened Teuchters Landing in 2008. What John and Peter are aiming to do is provide a home from home. There are local papers from all over Scotland to make you feel that bit more welcome. 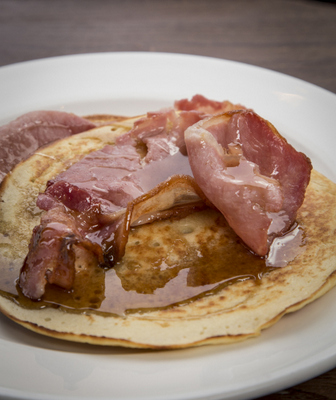 If you’ve been down to the Shore and surrounding area in Leith recently, you’ll know just how busy it can be, so if you can, come on a weekday or reserve a table. There’s a deck outside where you can chill when the weather is bright and warm (Peter was down on his hands and knees revarnishing it whilst we were there). 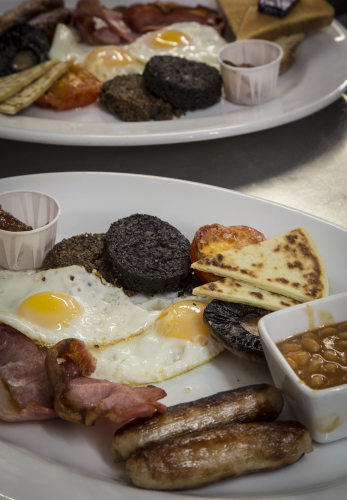 The Big Brekkie for Carnivores

And so to breakfast or brunch. This is served from 10:30 am each day. The menu labelled “Big Brekkie” is varied, comforting and very good value. They believe in giving you proper (dare I say) man-sized portions. Each dish is freshly made, so it’s not, perhaps, somewhere to go when you’re in a rush! Many ingredients are organic and local producers get a name check. You can start small with a bowl of porridge or venture to the Big Carnivores Plate or Big Vegetarian Plate. 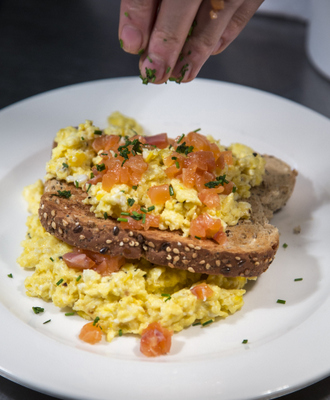 As it was pancake day, I chose pancakes, maple syrup and bacon. The pancakes were light and fluffy, the bacon properly crisp and the maple syrup a lovely sweet touch. 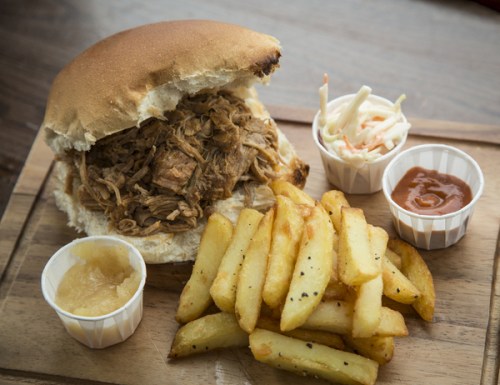 Brendan was in the mood for pulled pork. This arrived on a wooden platter with some very good chips and 3 pots to dip into: coleslaw, barbecue and apple. The barbecue sauce was perhaps a touch vinegary for my taste. The pork however, was meltingly tender and had a tomato-y taste.

We also gazed at the scrambled egg and smoked salmon. This had been my first choice before I decided to go with the pancakes. Cooked simply, this was an attractive more-ish dish.

Busy the time we left, the lunchtime crowd was filling the tables. We went back out to the bar, which I had somehow managed to walk through without really taking it in and gazed at the board listing all the malts they stock, there are quirky signs about the place – all very pleasing indeed. 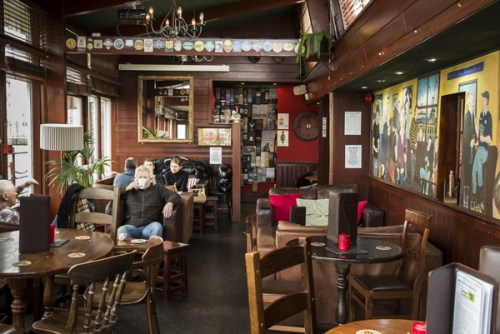 Relax and take a break.