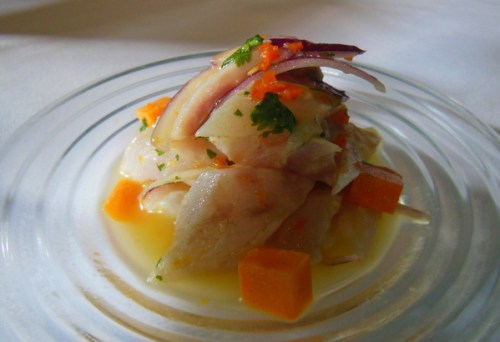 If Martin Morales has anything to do with it, Peruvian cooking will become the taste of 2013. Owner of Ceviche in London, dubbed the hottest restaurant of the year, he has just completed a 10-venue whistle stop tour of the country. Each night, he and his team created a pop up restaurant, gave a master class and cooked for around 35 diners. Chefs at each of the venues offered their restaurants and staff for the event. Excitement and anticipation was high. 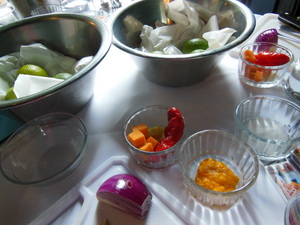 Ingredients for the ceviche including the ajo chilli

Mark Greenaway was his host in Edinburgh. Mark first encountered ceviche when he was working in Australia. “Martin’s version is quite different”, he enthused. “It’s a great opportunity for my team to understand new tastes and flavours”. Mark sat down with the rest of the guests and clearly relished the evening as much as we did!

In our masterclass with Martin we learn how to make the restaurant’s signature dish “Dom Ceviche” or King Ceviche. It’s fascinating to hear that there are many different types of ceviche in Peru, and each with a different influence. For example, there is a large Japanese population in Peru who bring Japanese flavours to their version of ceviche. 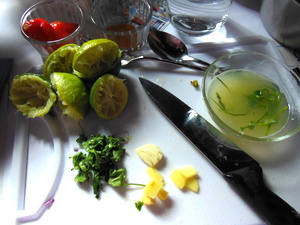 Martin leads us through the steps required to make the dish.

Finely slice the red onions (red onions are sweeter) and place in ice cold water. This makes them crisper. 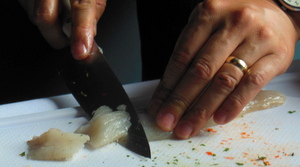 Slice the fish into 3 cm shapes

Squeeze the juice of 2 small limes, place in a bowl and add chopped garlic, ginger, the amarillo chilli and the finally the chopped coriander.

Add about 4 good pinches of salt. Taste as you go along – the mixture should have a good balance, not too salty, not to strongly lime juice flavoured. This mixture is called the “tiger’s milk marinade”. Set aside whilst you prepare the fish.

Pin bone your fish. Cut into diamond shapes about 2 cm long.  Sprinkle with salt. Set aside

Strain the “tiger’s milk” and pour over the fish. Drain the onions  and combine all ingredients.

After a few minutes plate the ingredients piling high and dot with the cubes of sweet potato. Serve.

And the taste? Quite extraordinary. It is zingy, fresh and delicious. The fish has a firm texture, more meat like than fishy. It make you think, this is so good for me and it tastes wonderful. Be adventurous and try it! 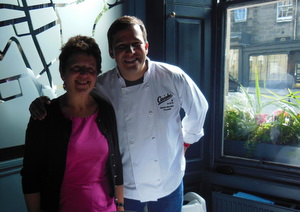 Martin’s CV is impressive, he latterly ran Disney Music and has produced many artists including Scotland’s own KT Tunstall. However, in 2010 he gave it up to follow his dream to create a restaurant and brand that would bring Peruvian food to the fore.

To create his restaurant, Martin and his team travelled throughout Peru finding the best recipes, then search the UK for the freshest fish. With pop-up restaurants and supper clubs he refined his ideas. Ceviche was born. It’s not simply a restaurant, it’s an ode to Peru. It celebrates, the food, people and music. 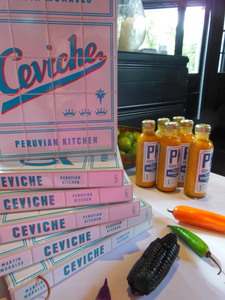 shows the breadth of flavours and textures in Peruvian cuisine certainly not simply ceviche and contains 100 recipes.

At the supper following the masterclass, we ateseveral of the dishes from the book:  a delicious confit duck and green rice dish, quinoa with butter bean and avocado and a Machu Pichu chocolate coffee pots. And of course not to be missed a pisco sour.