Making my own knife in France

At this time of year, we start thinking about vacations. Let me introduce you to a place that is the capital of cutlery and rather unexpected.

We are walking through the centre of the old town in Thiers ‘the cutlery capital” of France. Thiers is located not too far from Clermont Ferrand with a history dating back to Roman times. It became known for its cutlery making since the 14th century.

The buildings are ancient, many dating back to the 15th century. Used to Edinburgh’s lively old town where people live, shop and eat, it’s rather a shock  that many, many of these buildings are derelict. It would take millions of euros to restore the town. There’s obviously an appetite to do some improvements -at street level the buildings are boarded up and the boards are covered in photos giving a brighter aspect to the streets. Here and there, buildings have been restored or are in everyday use.

We pass the wonderfully named Seven Deadly Sins Restaurant. On the beams that protrude from the front, the 7 deadly sins are depicted 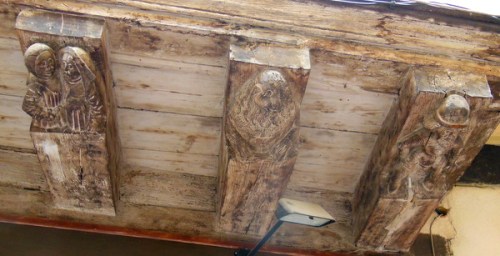 Later that day we take a free bus laid on by the tourist board (available in July and August) to the “Vallee des Rouets” a few miles out of town. On arrival we descend a steep slope bare at first then through trees, down to the river that dominates the town. 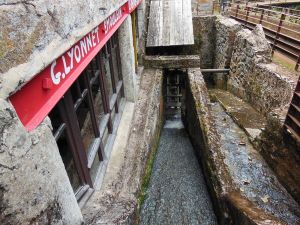 Water is diverted from the river to turn the water wheel

Dozens of workshops were situated in the Vallee des Rouets  each similar to the photograph above. Typically 6 to 12 workers spent all their days lying on the boards sharpening knife blades, often with a dog sitting on their legs for a bit of warmth. Both men and women worked there. Although women tended to do most of the finishing work on the floor above the men, there are boards still in existence with holes in for pregnant women to do the same tasks as the men!

The river Durolle is fast flowing, but due to the number of workshops, each diverting water to run the millstones, the businesses further down stream often had to stop work as there was not enough volume of water. Today it is a quiet, green tranquil place with one restored workshop you can visit. We throughly enjoyed a walk along the river past many of the old rouets (workshops) glimpsing old wooden wheels and equipment.  By the 1930s most of the workshops had been shut down and work transferred to the larger factories.

In the centre of town, vast factories align the Durolle. These have now all closed too. Owners have left the buildings to deteriorate and return to nature. It’s again a mixture of the beautiful and bleak. The still majestic buildings are lit up at night . We visit the Industrial Museum recently opened in the Usine de May next door to the Contemporary Art Gallery created in a former factory named Creux de l’Enfer “Gates of Hell”. We see how the town evolved, how electricity revolutionised the industry and perhaps created its downfall as it location next to the water was no longer necessary. It was a wet, dreary day, but it didn’t stop us enjoying walking along the river, discovering the history of the area by following a well mapped route. 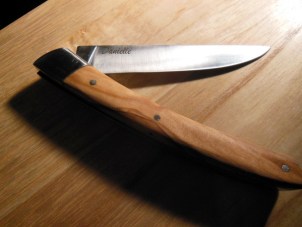 The Thiers knife I made

Cutlery making is still an important in Thiers – there are more than 300 business involved in the industry. Shops in the town display more knives than you can possibly imagine and for purposes you had never thought of. Rather than purchase one, I was intrigued to learn that I could make a “Thiers® knife myself . This is the name given to a specific knife made only in the Thiers district to strict criteria and standards. I managed to get the last place (out of 8) for the afternoon session at Atelier de fabrication Le Thiers®.  This workshop was set up to help young unemployed people gain skills and to give the public to try make a knife themselves. (Children can learn how to make a butter knife). My goodness was it fun!

Here’s one I made earlier

We were split into pairs and aided by a very patient Mickael. He demonstrated each step and guided us closely. Occasionally there were processes that were too tricky for us to do. Here I wished I’d perhaps done wood or metal work at school and wish I were a lot stronger. But, slowly but surely the elements came together and I created my own knife, which I am very, very proud of. This video shows how it was done. It’s amazing how many elements and steps there are, but after 1 1/2 hours the knife was complete. As it folds, it perfect to keep with you for a picnic – preferably of a fresh baguette and cheese of course

Thiers is different to most places you’d visit in France  but well stopping a while. In the heart of the Auvergne, it’s not a typical tourist destination and not a lot of English is spoken. If you go into the tourist office, they do have some of the guides in English and there’s an excellent translation of the visit available at Usine de May  – Industrial Museum. Do make a detour if you’re near Clermont Ferrand, the town will capture your heart. George Sand wrote a novel about Thiers, the Black City (La Ville Noire). 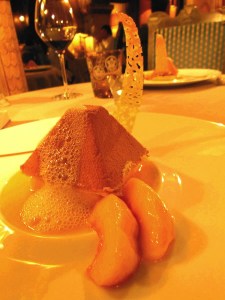 In Theirs, we had lunch at the Les Sept Peches Capitaux. This is a restaurant for the locals. You’ll find it packed at lunch with workers tucking into the copious set menu. Service is sassy (two waitresses for a 100 people) and service slow – but we loved it! 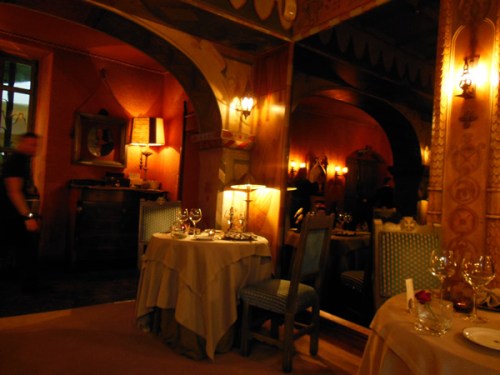 At the other end of the scale, the Chateau de Codignat is a fabulous Michelin starred restaurant and hotel. The decor is beautiful – a dream-like medieval castle. The cooking is sublime created by a very talented chef, Mathieu Babet. We’d love to go back and stay!

We stayed in the Domaine de Montvianeix which was located about 20 minutes from the city – a tranquil retreat with very good food. There are plenty of bed and breakfasts and cottages (Gites de France) to choose from in the area.