Dining at the Pass One Square Edinburgh

One evening not long before Christmas, four bloggers make their way to a very exclusive table. A table for four no more, no less. We made our way through the lounge, not quite as far as the dining room, through doors almost as if we were leaving the premises. Ahh, we’ve arrived. We’re dining in the kitchen!

Chef Webster, Executive Chef at One Square, the Sheraton Hotel, Edinburgh has invited us to experience what must be the most exclusive “table” in Edinburgh. Just four people can sit and enjoy a seven course menu specially devised by Malcolm “Dining at the Pass”. We’re to have a bird’s eye view of what goes on at the pass and watch our dishes being created. We’re also trying wines and cocktails created specially to complement the menu.

I think we were all a bit giggly before we began. It was fun to be somewhere diners would never venture. I had a bit of a challenge getting up onto the chair. They’re deliberately tall to make sure we don’t miss a thing but not easy for a small person! 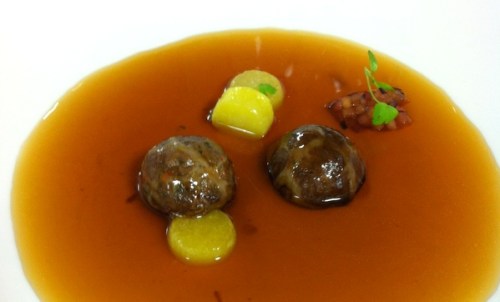 Welcome to dining at the pass with Erika, yours truly, Hilary and Nadine.

I think Gordon Ramsay and Marco Pierre White have a lot to answer for. It’s the first thing that people always ask when you mention you’ve been into a a professional kitchen. “Was there a lot of noise and swearing?” Whilst I can’t vouch for every restaurant, those ones I have been in have been calm with each person focussed on their task as to swearing? Not when I’ve been around. Chef Webster confirms “Yes this, is as noisy as it gets. The ordering system helps particularly, it’s transmitted electronically so that the waiters do not have to come in and out of the kitchen”.

The kitchen is vast. The Sheraton can serve 500 diners in one sitting but tonight it’s standard service. Diners are eating a festive menu, we watch each dish being beautifully finished off at the pass just to the right of where we are sitting. Ahead are all manner of stoves, grills, pots pans and equipment. We’re pleasantly warm, but not overly so. Induction hobs are used throughout the kitchen keeping the heat level down to a reasonable level.

Venison with squash, chicory and chocolate

There’s a pleasing focus on local ingredients, with some more exotic additions. St Bride’s ducks, Downhill Farm beetroot and Paddy’s Millstone and smoked Cuddy’s Cave to mention but a few. You can imagine, there were plenty of sighs of delight from the three of us!

I’m a big fan of tasting menus. I love the portion size and being inquisitive I like to try as many dishes as possible. For me, the dishes that really sang that evening where ones featuring the fewest ingredients – my all time favourites were the beetroot dish and the duck consomme (I could eat that forever). Thezs dishes really showcased their provenance. The wines and cocktails were expertly chosen to complement the dishes.

Just when I thought I could eat no more, an inspired cheese on toast really hit the spot.

The highlight of the meal (and there were many to choose from) was the spectacular dessert. We were asked to retire to the lounge whilst the scene was set. We arrived back at the pass to see our chefs standing at the pass with many small dishes lined up. They then proceeded to paint the granite with our dessert. And then, a huge chocolate egg was “thrown” into the mix and cinder toffee, raspberry granola, popping candy tumbled out. There was so many different tastes, textures and flavours to sample.  Each pair of us were determined not to leave a thing. What an amazing end to a very special meal.

Watch the video to see how the dish was created.

Dining at the pass menu

Dining at the Pass costs £80 per person or with matching wines £130. Booking essential.

Many thanks to MyMonkfish  for the photo of the ultimate dessert below. 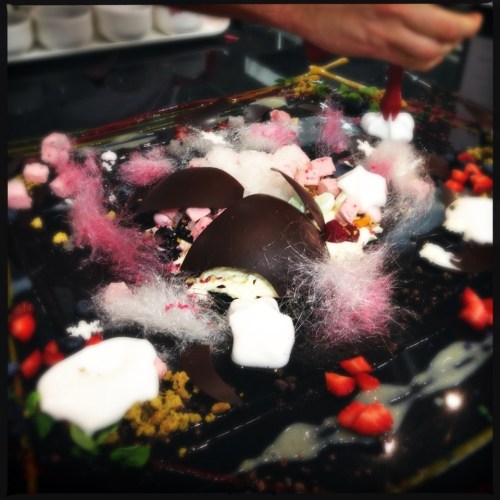