I’m sitting late one Friday afternoon in a micropub. Until a few moments ago I had never heard of a micropub, let alone had been in one. This one, Rutherfords, in Kelso is the only one in Scotland. Scattered across the UK there are more than 230.

A Micropub is a small freehouse which listens to its customers, mainly serves cask ales, promotes conversation, shuns all forms of electronic entertainment and dabbles in traditional pub snacks 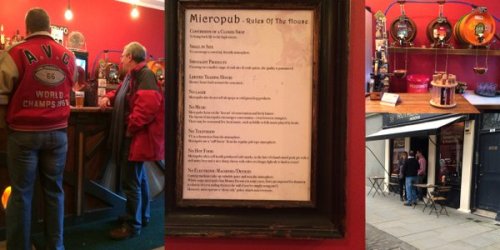 It seems that many have been opened in retail spaces that have closed, helping revitalise town centres. This one is a gem – there are plenty of local beers including Stewart Brewing beer on draft, and (a first for me) Pickerings gin on tap! It probably seats no more than 20 and is open “micro hours” – Noon to ten. Suffice to say it’s busy and you get an incredible welcome from owners Simon and Debbie

We’re in the Borders on a trip organised by Scot Rail and Rabbies. It’s in a trial stage and we’re the only two on the tour.

Leaving Edinburgh on the train, on the new Borders Railway, the scenery became more and more lovely as we got away from the city. It will look even more stunning when the leaves are out on the trees. The journey passed quickly. We were picked up at Galashiels by our attentive driver. It seemed rather late to start a tour at 2:30 pm and indeed when we got to our first stop Born in the Borders, the kitchen had closed for meals – they had in fact been expecting us earlier in the day. 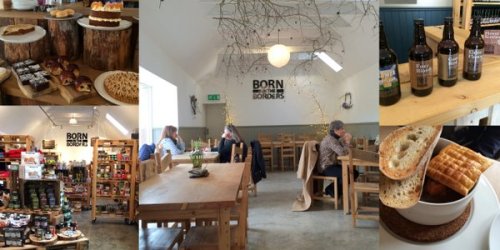 Good food and drink at Born in the Borders

Born in the Borders at Lanton Mill, Jedburgh  is an immaculate range of what must have been farm buildings at one time and includes a bottle shop, a delicatessen, a micro brewery and a cafe. The café is bright, light and airy with beautiful branches suspended from the ceiling – a lovely touch provided by a local business. When we explained our predicament, food was rustled up for us. It was delicious and filling. I had Mac and Cheese made with green pasta – a nice touch, whilst Mr EF tucked into Beef and Sle pie. Too bad we had no room for one of the cakes temptingly displayed.

We spent a good hour and a half eating, browsing in the delicatessen and trying samples of the Born in the Borders beer brewed on site. The bottle shop has an incredibly comprehensive selection of local beers on sale. Definitely worth a visit. 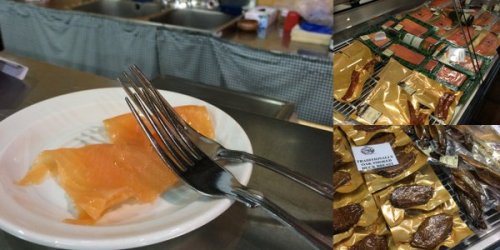 By now, we were rather time constrained, knowing that shops would be shutting around 5 pm. Our driver took us to Teviot Smokery. The smokery itself cannot be visited, but the range of smoked foods they produce are on display in the deli which has a good range of local items. We very much enjoyed our taste of their own smoked salmon and took home some smoked duck for another day’s supper. It went very well with a tasty salad.

So we missed having a walk round Hawick as most shops and cafes were shut, so we very pleased to discover the micropub instead.

I love the idea of escaping to the Borders from Edinburgh. With a few tweaks this could be a good tour. I am sure there are plenty more local producers to discover, and if the trip started in the morning, more could be fitted in. Lets hope the tour is revised and updated – then I’d suggest heartily, “Discover the Borders!” Many thanks to our Rabbies driver who suggested visiting Teviot and the micropub.

Micropub and Microbrewery Association Search for micropubs all over the UK.

ScotRail invited Edinburgh Foody to sample the tour. Thank you to Born in the Borders for lunch.