Carte Noire has made a  range of espresso capsules that work with Nespresso* machines. I’ve got a Krups Nespresso Citiz, an easy to use machine that produces great coffee every time. When I saw a call for blogger to test and review Nespresso-compliant capsules from Carte Noire, I was intrigued and applied. A few days later, I received a big, elegant box with coffee and espresso glasses. Trying the coffee wasn’t enough. I wanted to cook with it, make something really nice that captured the flavour and elegance of the box it came in. It didn’t take long to come up with an idea: kaffebiskvier.

When we first bought the Nespresso machine, there wasn’t a Nespresso boutique in Edinburgh so when we ran out of the trial pack, we got decaff capsules from Sainsbury. Unfortunately, they weren’t a very good fit: they worked, but they stuck and getting them to release was a nuisance. The Carte Noire capsules don’t have that problem. They fit perfectly and release smoothly. It just like using a Nespresso capsule. 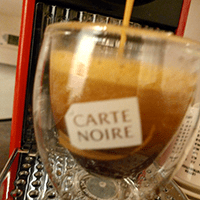 Carte Noire’s four espressos are pure Arabica coffees that produce a dark coffee with a creamy but soft crema. I’m a little sensitive to bitterness and acidity in coffee and enjoy savoury notes. It’s no surprise that the coffee I enjoyed the most was the lightest one. 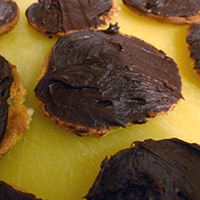 Shaping ganache on top of the almond bisquits.

Coffee’s not just for drinking, so I decided to cook, well, bake, with it. If we weren’t a vegetarian house hold, I would have put some beef in the slow cooker and made a coffee molé, but instead I made rich and delicious chocolate and coffee confections based on a traditional Swedish recipe. I used the Intense in a ganache to give the full coffee flavour a chance to cut through the rich chocolate, and the Elégant in the chocolate cover to infuse it with just a hint of coffee flavour. I found an Amaretto and coffee shot a very good accompaniment. 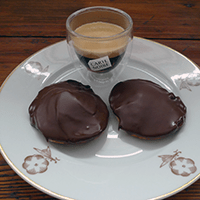 The Swedish version is the chocolat ‘biskvi’ (bisque-vee). Traditionally, it has an almond base topped with a mound of chocolate flavoured butter cream and covered in dark chocolate. A version with a butter-based chocolate truffle centre is called a Sarah Bernhardt. My version is coffee-flavoured and uses a ganache instead of butter cream. The result is very indulgent indeed.

Save Print
Preparation time
15 mins
Cooking time
4 hours
Total time
4 hours 15 mins
The traditional recipe has a soft butter cream filling under a crisp chocolate shell. The ganache in this recipe is quite firm, so I added a little almond oil to the chocolate cover to make it easier to work with. Adjust the level of coffee flavour when infusing the cream: add more capsules for a fuller flavour.
Author: Edinburgh Foody
Recipe type: Cake
Cuisine: Swedish
Serves: 15
Ingredients
Base
Ganache
Cover
Instructions
Base
Ganache
Assemble core
Cover
3.5.3208 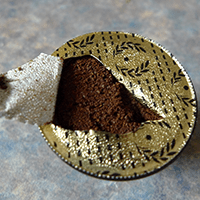 Opening the Carte Noire capsule to reveal the coffee inside.

The first time I served kaffebiskvier was a Friday night, so I served them with an amaretto espresso shot to make them even more festive and to strengthen the almond flavour.

Top tip: if you want to keep the coffee as hot as it can be, heat the amaretto in the milk heater before using it.