Street food is hugely popular at the moment. Cairo Kitchen, a cookbook inspired by the recipes used in the eponymous Egyptian restaurant chain, adds Middle Eastern dishes to the street food mix. Wanting to recreate a restaurant version of the popular Egyptian koshary cart, Suzanne Zeidy and her partners started a relaxed restaurant with traditional home- and street-style dishes. I found out if they work in my kitchen too. 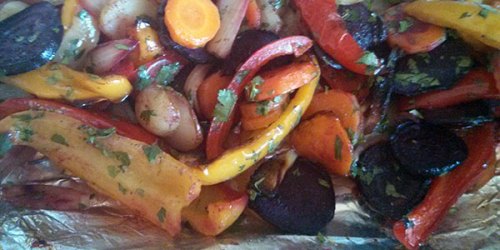 Middle Eastern roast vegetables: a lovely side, salad or filling for pain baignant.

Cairo Kitchen is beautifully photographed and laid out. As well as recipes, it has a number of articles on aspects of Egyptian food and street-food culture. The article on koshary helped me understand the inspiration for the restaurants and quite how important the dish is in Egyptian culture. The word (and the dish), koshary, a hindi word that means ‘unlikely mix’ was original, is also the  root of kedgeree.  The Egyptian dish  combines rice, lentils, pasta and chickpeas with onions and cumin-flavoured tomato sauce. It’s the ultimate in comfort food and there are several different versions in the book, including ‘wellbeing koshary’, a healthy, pasta-free option. 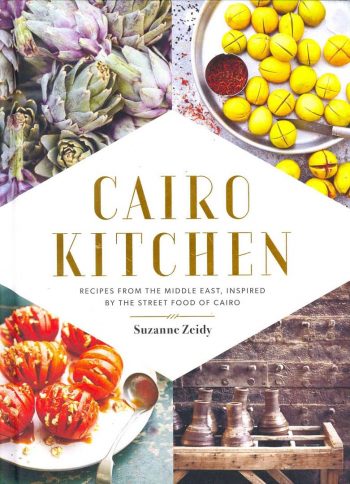 Cairo Kitchen is divided into sections, starting with Breakfast, then Mezza, Soups, Greens, beans and grains, Street foot, Family-style meals, all the way through to Pickles, preserves, dressings and pastes, Desserts and Drinks. When I first saw the table of content, the greens, beans and grains and street food sections appealed in particular. Many of the mezza and grain dishes are vegetarian which I like.

Mezze are great for picnics, evenings in and buffets and I’m a huge fan of labne balls and dips. The article on mezza tells us that Egyptian hosts take pride in serving more food than their guests can eat. I’m always fretting that there won’t be enough food, even when I objectively know there’s more than enough. There are lots of tempting recipes here. I think several of the dips would be great with one of the soups and home-made flat bread.

The street food chapter has three recipes for koshary – which underlines how important this dish is not just for the country but also the restaurant – as well as sandwiches with vegetables, liver and sausages. The Alexandrian calves liver with garlic and chilli looks lovely and I want to make taameya, a kind of broadbean falafel, when I stock up on dried broad beans. 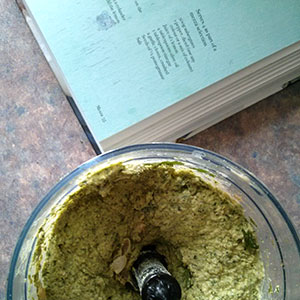 The chapter on family-style meals has the most meat recipes. It covers kofta, both traditional and with rice, moussaka, stuffed vegetables, beef okra, freekeh-stuffed chicken and grilled sardines. It’s a mouthwatering range of dishes.

The pickles and preserves chapter is great too, with dressings and pastes that spice up a range of dishes. PIckled lemons, anyone? They looks amazing. I’m a fan of the coriander paste – olive oil, toasted pine nuts and coriander – which stores for up to three days and tastes great on soups, smeared on bread, or added to stews at the last minute.

Getting Middle Eastern at Home 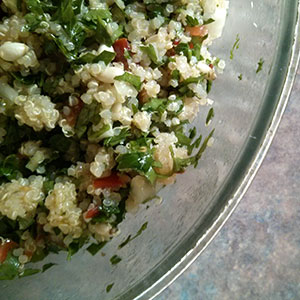 A couple of weeks ago, friends and I took a road trip up to Brora in the north of Scotland. It was a five hour drive so we decided to take a picnic. I offered to cook. Cairo Kitchen was sitting there, waiting to be used. I had a look through it and decided to incorporate a few of the dishes into my menu: coriander hummus, roasted vegetables and quinoa tabboula. The three dishes were linked by the flavours of coriander and parsley.

I put the roast vegetables in home-made potato buns spread with olive oil and wrapped them tightly to make a vegetarian, Middle Eastern version of the pain baignant I ate on the beach as a kid. Since one of the party doesn’t like aubergine, I swapped out the traditional vegetable for beetroot which worked surprisingly well with sweet roasted peppers and onions.

The recipes are clear and easy to follow and the dishes were well received. The coriander hummus makes a nice change to our normal hummus. It has more tahini than we usually use, but that balanced up the herb flavours beautifully. Adding parsley to the mix is really cleaver because it stops the coriander from becoming too overpowering: it’s there, but it doesn’t get soapy as coriander can do. The quinoa tabboula was delicious and a good source of protein at my vegetarian picnic. It also went well with the roast veg that didn’t make it into the buns.

We ate well, sitting in a public garden in Pitlochry with plates heaped with food from Cairo Kitchen and glasses of red wine. There were a lot of other dishes I was tempted to include – the tomato and walnut salad for example. I’ve also tried the kofta – garlic and parsley lamb skewers – and beseesa – a crumbly, almost savoury, polenta cake that goes great with tea or coffee.

I know I’ll come back to this book for picnic foods and autumn dinners. If you like Middle Eastern food, this is a great resource to dip into and find dishes to make part of your standard repertoire, or to add new twists to dishes you already make. 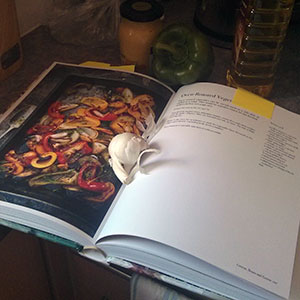 Getting ready to get cooking.