Summer wouldn’t be the same without a delicious punnet of juicy ripe berries; one of the highlights from Scotland’s natural larder at this time of year. Strawberries, raspberries, red, white and blackcurrants; they can all be found nestling on the hillside at Craigie’s Farm a few miles west of Edinburgh near Kirkliston.

Run by John and Kirsteen Sinclair, 4th generation farmers, the family have been here since 1966 when it was originally a dairy farm. Since then generations have visited Craigie’s to Pick Your Own (PYO). Once there were six PYO farms this near to Edinburgh, but only Craigie’s remains, employing a team of 50 people and welcoming hundreds of visitors a day across the PYO season. 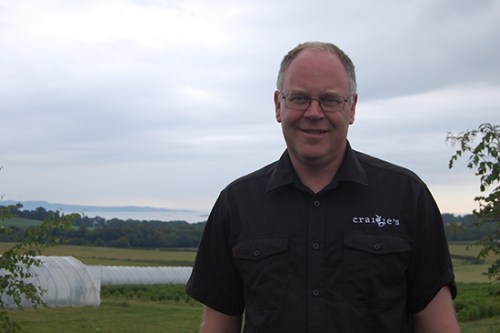 With 260 acres to farm, 20 acres are given over to soft fruit and the rest arable crops. The PYO strawberries, raspberries and cherries are grown in the polytunnels, while goosberries (green and red varieties) currants and autumn pumpkins grow out in the fields. The raspberries are grown in pots, hundreds of them, which allows their growing environment to be carefully controlled and protects against pests and diseases. Along with the polytunnels it’s helped to extend the growing season, with more plants kept frozen in their pots at -5 degrees and brought out later in the year. 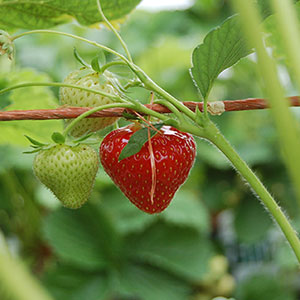 Strawberries are grown on a tabletop system, which allows more control over the quality and harvesting over the fruit, removing the back-breaking work for pickers out in the fields, and, indeed, PYO-ers. Again, the polytunnels extend the season and protect from the birds and the weather so that fruits can still be picked into the autumn. The farm is not organic, but the focus is on working with nature and encouraging biodiversity as much as possible to ensure sustainable farming for future generations.

Seven varieties of cherries are still ripening, with the fruits ready to pick when they’re far bigger than you expect, almost black in colour, heavy and sweet. PYO means you can taste soft fruits when they are truly ripe and full of flavour. Most we buy in the shops are picked and sold unripe for ease of transportation and a longer shelf life, meaning the true taste of these natural gems is often forgotten. However Scotland’s long, summer daylight hours and cool temperatures make it the ideal climate for the slow ripening process that produces the sweetest, tastiest berries. 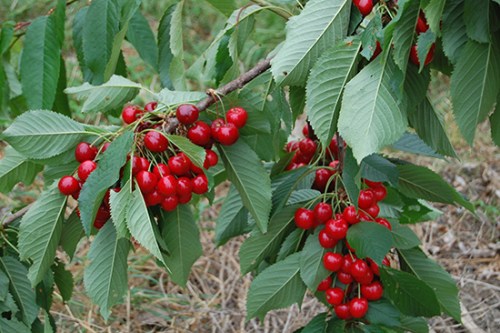 Cherries on the branch.

Out in the fields, rows of fruit bushes are dripping with fruit, from intense, meaty blackcurrants to jewel-like red and whitecurrants to tart, green gooseberries for the jam pan. Strawberries are still the most popular, with raspberries not far behind due to the fact it can be hard to find decent ones in the shops. However gooseberries have been growing in popularity as more and more people rediscover skills like jam making. Craigie’s run courses for adults and kids during the summer to transform and preserve excess fruit for the rest of the year. 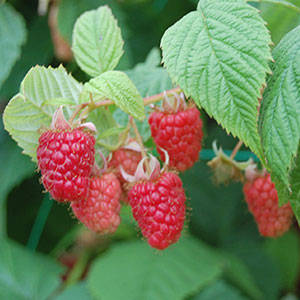 Raspberries, ripe and ready to pick.

The farm also started the Craigie’s Education and Environment project as a charity for people with physical or mental disabilities to visit the farm and grow vegetables, including plants to be transplanted out into the fields. Another area is the nature trail and allotment area for children from three local school to learn about growing and biodiversity, with plans to expand it in the future.

It’s all part of the philosophy as farmers to educate and give people the opportunity to find out where their food comes from. PYO isn’t just about a punnet of sun-ripened berries eaten in the car before you even get home; for many of us as children it would have been one of the first times we saw how our food was grown. These precious early memories mean families continue to flock to Craigie’s year after year. What better way to spend a sunny afternoon?

In my further guest posts this month I’ll be sharing a recipe using summer berries and showing how to preserve fruit to enjoy even in the depths of winter. 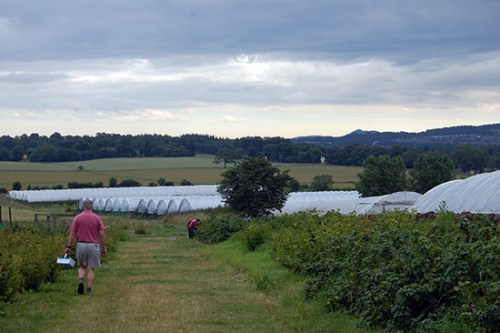 A graduate of Ballymaloe Cookery School, I now live in Edinburgh cooking, writing and campaigning for real food, and blogging at http://lonelyonasunday.blogspot.co.uk/.
View all posts by Caroline Rye →