Jams to remind you of summer

Whilst I have been in France, I’ve been to the market each week and have drooled over the produce. But there’s only so much one person can eat. What could I make to encapsulate summer in a jar? Something I could take back to Scotland to enjoy later? Jam of course! 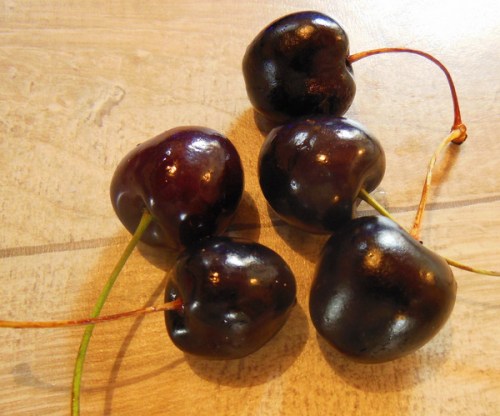 It’s one thing deciding to make jam and then try making it in someone else’s kitchen. What could I use instead of my usual jam pan? What should I stir it with? Help! My first attempt at apricot jam was not too successful. I let it catch on the bottom of the pan and ruined it. One thing that really stumped me was how on earth you are supposed to use a digital thermometer in a boiling hot pan – the one I was using would not clip onto the side of the pan I’d chosen. And why did the digital scales groan and display EEEEE when I tried to weigh more than two kilos? 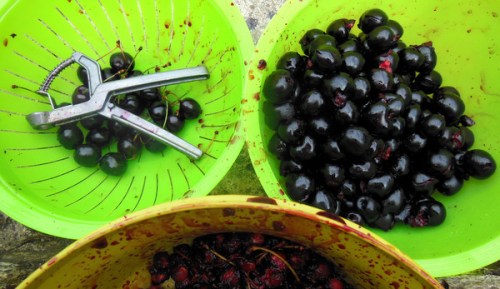 The second batch of apricot jam proved much more successful and I am happy eating it with my weekend croissant. Not content to stop there, for a week or so I’ve been thinking about making cherry jam. The cherries have been particularly luscious – huge black, sweet globes. I realised today that I had almost left it too late. Whereas cherries will be available in a couple of weeks from Craigie’s near Edinburgh , the season here is coming to the end. (Check out availability at your local pick your own place). 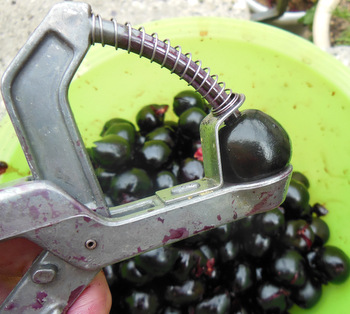 Such a useful gadget – a cherry/olive stoner

gadget – very satisfying. Although I would not suggest you start de-stoning cherries if you need to have beautiful nails that evening, you end up with stained fingers. By this time I had got hold of my trusty cooking thermometer (similar to this Jam Sugar Confectionery Thermometer available from Amazon) and off I set. 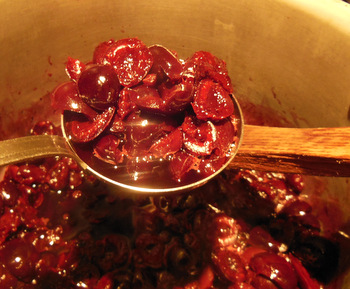 Cook the cherries until softened

I checked out various recipes and rather liked the simplicity of David Leibovitz No Recipe Jam recipe. I have tweaked it a little. I have gone for a soft set jam, with large piece of fruit. Chop the pieces smaller and cook until you’ve got a harder set if you prefer. You can use any type of cherries and the colour of your finished jam will vary depending on what type you’ve used. Be brave, it is well worth having a go at your own jam. There is nothing quite like it! 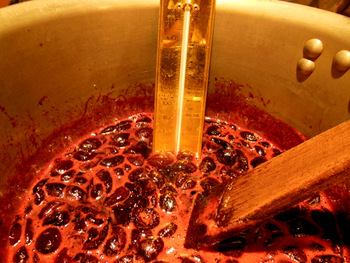 Bring the mixture to the boil gently then to 104C/220F

Many recipes use equal amounts of fruit to sugar, I’ve used less. If you do this and want to be sure of keeping qualities, after you’ve made the jam, you can place the jars (with proper sealed caps) on a tea towel in a pan of water large enough to take the jars. Make sure they do not touch. Add water, bring to the boil and simmer for an hour. This creates a really good seal and the jam will keep longer. 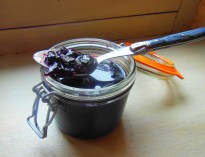 Save Print
Preparation time
30 mins
Cooking time
30 mins
Total time
1 hour
This is based on David Leibowitz's No Recipe Cherry Jam which he published in 2005. You can make smaller or larger quantities according to the fruit you have available. You'll need a large pan, a thermometer, glass preserve jars (such as Kilner or Parfait) and two plates to place in your freezer to help you test your jam. You can make apricot jam in the same way.
Author: Edinburgh Foody
Recipe type: Jam
Cuisine: British
Serves: 10
Ingredients
Instructions
3.2.2708 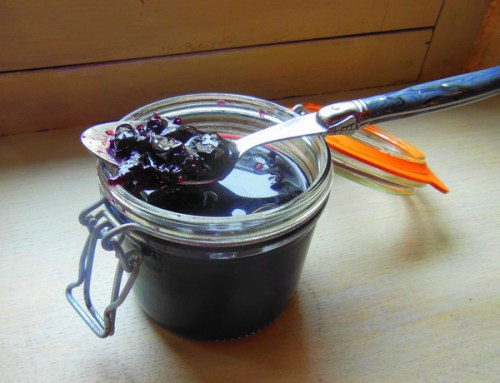