Social and Cocktail – they shake, you enjoy yourself

Want to have a cocktail party but don’t really want to mix all your own? There’s help. Social and Cocktail takes a bar, with all the glasses, booze, fruit ice and tools of the trade, to you. Last Saturday, they were at mine, mixing up a delicious storm for me and some of the people who have been contributing to Edinburgh Foody in the last few months. The tale is told in five cocktails. 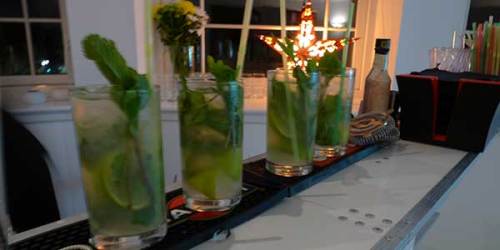 A line of mojitos waiting to start the party. 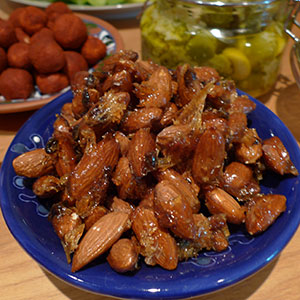 Chipotle and caramel almonds. The perfect companion to a mojito?

‘I did wonder who had chosen the cocktails,’ said William, our mixologist for the evening, ‘it’s quite a disco selection.’

I had to own up. It was me. I selected from the Popular menu, not from all the cocktails in the entire world. I don’t know what oddness I might have come up with if there hadn’t been some restraints put on my selection process. (Champagne cocktails and negronis all the way, probably.) I can live with disco: I’m a child of the 70s, and Agneta Fältskog was very important to me, at one point.

This is the joy of Social and Cocktails. As well as a website full of cocktails recipes and know-how, they offer a service: a cocktail bar in your own home (or office, or garden, or where ever you decide you want it). The bar is an impressive piece of kit. It starts as a white travel box and turns into a sturdy, handy bar that holds fruit, shakers, bottles of booze and makes a good working area for your bartender. You will need a little bit of extra space for glasses and ice.

In a moment of idiocy I invited people to arrive at the same time that I had given to Social and Cocktail, so we were there to watch as the guys got set up. We enjoyed watching the build and preparation but I’m not sure that having prosecco-sipping people avidly staring at you helps the set-up one bit. Here’s my hot tip for future cocktail party hosts: allow the bar to set up first. It’s kinder to everyone. 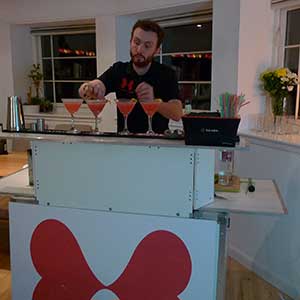 Social and Cocktails have worked in all kinds of environments. Mostly homes and offices. Once, I think it was for a fifth company birthday, they were at an office all day, making cocktails on request as people worked. They are popular with hen parties and birthday parties. Inviting someone in to do the mixing is, in my opinion, a brilliant idea. You won’t have to run around town and risk not getting in places, you don’t have to do your own mixing and spill triple sec all over the kitchen floor. (And you don’t have to wash the glasses afterwards.)

Instead, a professional makes the drinks, neatly, tidily. It’s also cheaper than in a bar or club. Our evening was worth £250. That represents five cocktails each for ten people which works out at £5 per drink. Social and Cocktail have a range of menus and prices. If you want an evening of champagne cocktails, you can have that (but it is a little more expensive).

Sex on the Beach 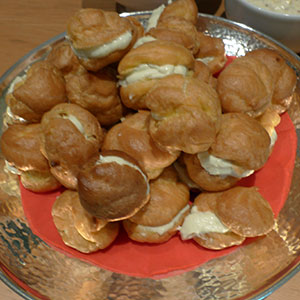 Look! Mouth-sized disco balls. Go on, have one.

It’s a bad name, but I think it’s a very nice cocktail. And we needed something long at this point. That’s another tip: mix long and short and make sure there’s water around. Cocktails are potent, even the fruity ones. Some kind of snacks are also good. I like cooking, so I had made a few different dips – red pepper hummus, veggie salsa verde and goats cheese, lemon and black pepper, little bites – lemon olives, labneh balls, blue cheese choux puffs, chipotle candied almonds, and dip carriers – buckwheat cheese straws, crostini and crudities. All relatively straight-forward things that keep well if they don’t get eaten.

Except for the choux puffs. They don’t keep at all, and aren’t all that straight forward, but they were fun and just a little retro. Like disco. 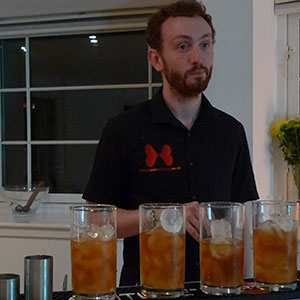 William waits for us to come claim our dark and stormy’s, as soon as we’re done comparing bitters.

With the rise of cocktails and mixology in bars and at home, exotic ingredients become easier to get hold of.  The Bon Vivant’s Companion, on Thistle Street, sells different bitters, for example. Not all bitters are Angostura. Social and Cocktails use Fee Brother’s orange bitter instead of Angostura (which are also orange bitters). We happen to have a bottle of Angostura, so we compared the two using the simple splash-on-the-top-of-the-hand technique. It was really interesting. The Fee Brother’s bitter was sweeter, more orangey. The Angostura bitters were much spicier, more complex and medicinal. Depending on which one you use, you get quite a different drink.

I chose this one because I’m not keen on dark rum. I am now. Dark and stormy is a really pleasant drink. William told us that it gets its name from how it looks when you add a few dashes of Angostura bitters. The cloudy sky of rum and ginger beer becomes more overcast with dark drops of bitters. It’s a nice image.

I’m a huge fan or martinis – a very dry, dirty is one of my favourites, but I’m also known to enjoy a French or an Espresso now and then. I’ve always assumed that the appeltini was a lighter, less big-hit booze version of a martini, something a little fruitier, a little flirtier, than the traditional one. I was right. It’s nice, and surprisingly refreshing, but I prefer the original. We enjoyed talking to William who knows alot about cocktails and the drinks industry. Because cocktails are so popular, bars are doing interesting things with them. I was fascinated to hear about places that put mixes in casks to let them mature, or bottle age negronis. We asked William about his favourite cocktail. It was a Manhattan, closely followed by a Red Hook. Named for another area of New York, this one uses only half the sweet vermouth and and tops up with Maraschino cherry liqueur. Sweet but delicious.

While we finished our appeltinis, William started tidying up. Breakdown was fast and efficient. It was sad to see the bar go, but it was a pleasure to have had William with us for the evening, mixing gorgeous drinks and sharing his knowledge and expertise. Now that I know about Social and Cocktail, and have seen how brilliantly the idea works, I’ll keep them in mind for celebrations. It’s such a brilliant idea and makes hosting an absolute pleasure.

Book now to get one of Social and Cocktail’s special Christmas party deals: from £25 per person for cocktails and canapés.