I like cooking. Not everyone one does. The thing about cooking that sometimes get away from me is planning. And when I haven’t planned well, I tend to waste more: I don’t have the right things, or I don’t cook the things I have. Enter Gousto.

If you’re a fan of Dragons’ Den, you might remember Gousto. They’re a company that sends you everything you need to make a particular meal. I tried three vegetarian meals and received a big bag of goodies, complete with recipe cards that take you through making the dishes. Three meals, everything eaten and accounted for, not a sliver of waste. That was great but more importantly, so was the food.

This is how it works: you chose recipes, Gousto sources the ingredients and sends them to you, you cook. This is what happened when I tried them out. 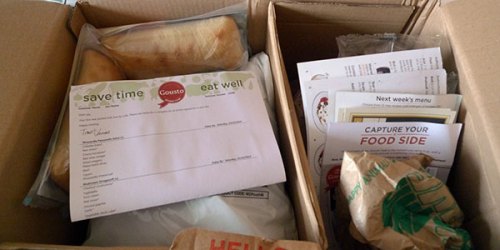 A box of delights, all ready to be cooked and eaten.

The box arrived and the guy who delivered it was most excited about what might be inside. He said he could smell bananas. I assured him that was probably another box. As soon as I could, I whisked my treasure into the kitchen to see what I had. Everything I needed was there, from tiny bags of spice, to yoghurt, potatoes and lentils. Perishables were in a recyclable wool and ice bag which held the temperature so well we intend to reuse it. (If you put your nose to it, it smells just a little bit of wool. A wonderful, reassuring scent.) There were also recipe cards for my forthcoming dinners. 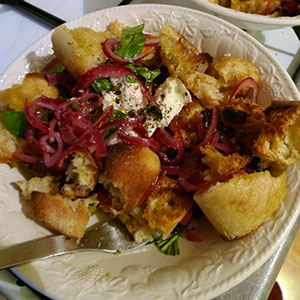 Panzanella is a Tuscan bread salad. It’s simple, and delicious. This was the first dish that we had. I decided the order by looking at the dates – each dish comes with a ‘cook before’ date. There was no real concern that we wouldn’t eat the dishes before those dates, but I decided to make the recipe with the nearest date first.

The salad’s really simple and very flavoursome. It contained cherry tomatoes, red onion that had been rinsed in boiling water and marinated in vinegar to make it milder, toasted ciabatta, olives, capers, mozarella, basil and olive oil. Straightforward and really, really nice. We were both hungry that night, and I had little patience with standing in the kitchen faffing – I  had things to do. But the dish came together quickly and quickly. It was easy to eat as well as easy to make, so we were very happy after dinner. 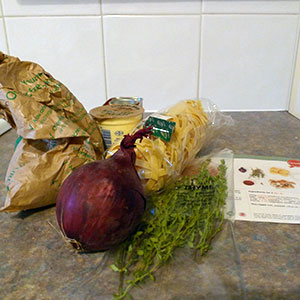 The ingredients for mushroom Stroganoff. Now, to cook it.

I don’t know if everyone has a Stroganoff recipe that they grew up with. I did. We made it with liver and lashings of cream, tomato puré and a tad mustard. Recent investigations have suggested to me that the recipe I grew up with wasn’t traditional. But I grew up to love it.

The Gousto Stroganoff recipe isn’t entirely traditional either, but it’s still very tasty. It’s served with pasta, and as well as onions and mushrooms, thyme and paprika are used for flavour. Sour cream is the finishing touch and the result is a creamy, rich version of Stroganoff that I really enjoyed. 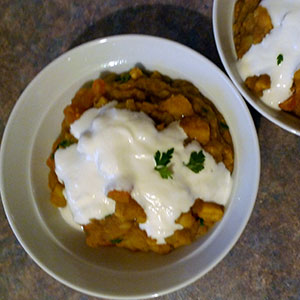 Vegetable curry is perfect for a cold Friday evening.

I saved the curry to last because in my book, curry’s a complicated dish and therefore suitable for a weekend night. Of course, a Gousto curry isn’t complicated. Simplicity is core to their business idea.

I chopped onion, potatoes, carrots and parsnips, softened them, added curry powder, lentils stock and water and let it bubble away. I overcooked it slighty – in a moment of distraction I went off and did something else, leaving the pot simmering – so the lentils were almost at dahl consistency. I really liked that. The final dish was soothing in a way that only root vegetables and soft dahl can be, but tasty and fresh thanks to coriander and yoghurt. I might have liked a little more chilli, but that’s easy to adjust on the plate, either with the lime pickle that is a staple ingredient in our house, or a sprinkling of chilli. If you are a confident cook, you can make substitutions or additions: a pinch of chilli here, smoked paprika there. The bowl was generous, filling and warming. 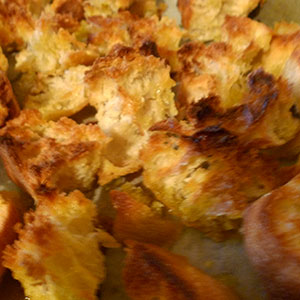 I really liked Gousto’s meals. The recipes are simple and easy to follow but still produce really tasty food. It took a little longer to make everything than the recipe cards suggested, but I don’t have a quibble with that. I’ve always been a slow chopper, and I’m very careful when softening onions. Both C. and I enjoyed the dishes and it was interesting to have things we would probably not think to cook. Panzanella and curry, yes, we make that, but Stroganoff hasn’t been part of my repertoir for years.

The menu changes every week, and you can chose whether to get food for two or fur people. The recipe cards tells you how many calories are in each serving, and the website helps you pick meals with more vegetables, or healthier meals. It’s convenient but still healthy, and there’s a good variety of recipes available. I really liked that there was no waste, that the meal planning was taken care of and that I didn’t have to go shopping. Other things that makes me feel good about using Gousto again is that they are committed to sustainability, want to source the best possible ingredients, and care about animal wellfare.

You get your first box with a £15 discount. After that, the cost will vary depending on what you order, but expect around £35 for three meals for two people.