One Square, the restaurant at the Sheraton Hotel, has a new chef, Craig Hart. To introduce Edinburgh’s Total Food Geeks to him, One Square held a blogger’s event last week. I was fortunate enough to be there so I can give you a preview of One Square’s new menu, introduce you to the new chef, and tell you about my quenelling skills. 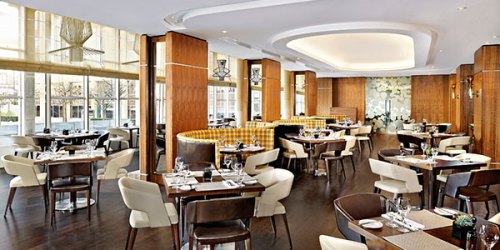 `One Square restaurant in the Sheraton Hotel

To whet our appetites, One Square introduced us to Craig Hart, their new chef, and pitted our skills against each other. Craig showed us how to make three canapés – steak tartar, salmon sushi and a goats cheese, pear gel and nut ball – and, after dividing us into teams, asked us to copy him. The team with the best plate would win. 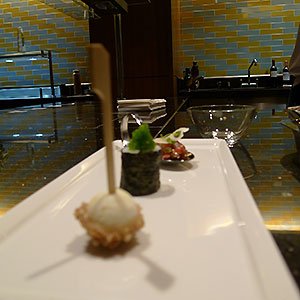 Canapés – we were very proud of our efforts.

I teamed up with @KeepCalmAndFannyOn and @YelpEdinburgh, two delightful individuals who agreed that we should do what we could to win. We put our heads together, set to and worked hard to copy Craig perfectly. I took on the steak tartar because it’s a dish I love. After mixing ingredients together, I used to spoons to make the final quenelle. This turned out to be more difficult than I expected. In everyday cooking, it’s fair to say that I don’t quenelle much. I chop, mash, grate and whisk, but I don’t spend much time presenting things prettily. Mine is not normally a well presented plate.

I will tell you now that we didn’t win. We came second. What let us down was, of course, the steak tartar. It turns out that my quenelling skills are fine, but I’m not very good with the salt pot. (Because I don’t use it.) I also think our steak was a little over-yolked. The memories of dinner will help me get over letting my team down.

By now our appetites were up and that was a good thing – dinner was about to be served.

One Square is to the left of the Sheraton entrance. It’s a calm space with tables and booths for one or many diners. We got a long table – there were 12 of us – with a good view of Festival Square. Around us diners enjoyed there evenings. When we sat down, there were quite a few families finishing dinner, but as the meal progressed, they left and more mature groups arrived. It’s a spacious space so diners don’t have to listen to each other’s conversation. Not that we had time to eavesdrop: we had a five-course dinner with matched drinks to eat. And what a dinner! 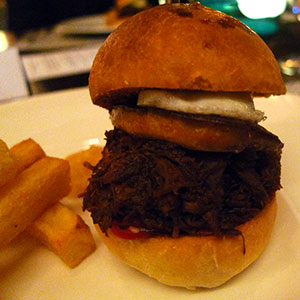 Not just any burger but a One Square burger of confit duck leg and foie gras.

It started with cider to accompany a braised Dryfeholm farm pork belly and black pudding terrine, micro leaf salad and cauliflower three ways. The terrine was tasty and moist, rich but not overwhelming. Of the cauliflower, I particularly enjoyed the crisp.

For the roast butternut squash soup with Granny Smith apple and baby coriander, we had a lovely Viognier which reminded me of dry Gewurstraminer at its best. It had full fruit flavour, perfect for the velvety soup. The micro coriander lifted the soup in a way I hadn’t expected and the goats cheese croquette was a delicious surprise.

Then we swapped to red for the main courses. The mini One Square duck burger was luxurious. It’s a concoction of confit duck leg topped with foie gras, and a fried quails egg in a bun. It came served with mini onion rings and twice-cooked chips. The foie gras was delicious. I enjoyed that it was in a slice so that I could actually taste it. Often foie gras is incorporated into dishes to the point where it disappears. The duck-leg was melt-in-the-mouth soft. It was a very posh burger indeed. 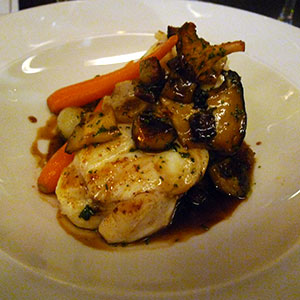 Monkfish on the bone, with a rich red wine sauce, bacon and wild mushrooms.

With the braised Scrabster monkfish we had a rather pleasant Pinot Noir. It went well with the meaty fish and the rich shallot red wine sauce. I really enjoyed this dish. It came with delicate carrots, savoury wild mushrooms and salty bacon. The dish was brought together by a red wine sauce. It had been a while since I last had monkfish and I’d forgotten how much I like the texture. Although ‘meaty’ is the usual description of it, I don’t think that’s quite right. There’s something in the structure of monkfish that rips in a way that other meats don’t. It’s a very particular texture, a mouth feel, I suppose, and one I like a lot.

Then came textures of One Square desserts. Yes, plural.

First was a slice of cheese tart, a delicious savory that looked a lot like a dessert. It was served with grapes and crisp sugar tuilles. I enjoyed it but it caused controversy by looking too much like an apple pie. With this cheesy slice, what you saw wasn’t quite what you got. With it we had a Portuguese dessert wine made from several different grapes. It was golden and syrupy and contrasted the salty cheese tart well. 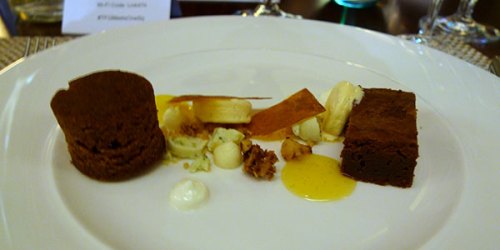 Toffee pudding, brownie and all kinds of other sweet goodies.

The sweet dessert was a fun plate of mixed delights, from sticky toffee pudding, basil meringue, ice cream, brownie and a variety of crispy and saucy elements. To drink, we had a dessert cocktail, a dish in it’s own right, that Craig had concocted for us. It was was based on créme brulée and was made with vanilla vodka, Kaluha, a touch of créme de banane, and topped with cream and burnt sugar. It was utterly lush and my photographs of it are hopelessly out of focus.

We had a lovely meal, and a great evening. It’s great to have a chance to meet up with Edinburgh’s other bloggers and talk about food, restaurants and our experiences. I look forward to going back to One Square to try more of the menu and seeing what else Craig comes up with. I’m also overdue a visit to their bar for a gin tasting. Thank you, Square One, for giving us a sneak peek and for treating us so well!

The photo of Craig Hart and the restaurant interior courtesy of One Square.