Cheese. Love it. I like mature cheese, and fresh, delicate new cheese. Over the last few months, I’ve seen mentions of cheese making kits on social media and I’ve been curious to try one out. Last weekend, I got my hands on one for making goats cheese. Filled with excitement I skipped home, passing the supermarket to buy milk, to try it out. 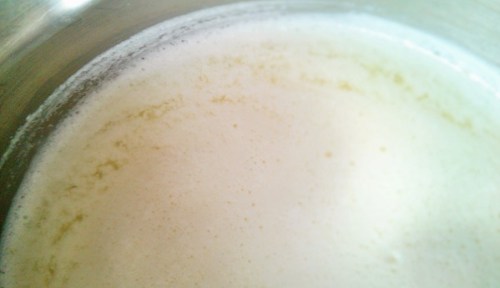 The white stuff is the curd; the greenish liquid is the whey.

Making goats cheese is relatively simple. All the ingredients you need for a gently acidic goats curd is plenty of full-fat goats milk and some kind of acid. (There’s very little difference between the process of making this type of goats cheese and paneer.) Of course you also need some kit: a thermometer and a cheese cloth are the only you might not already have in the cupboard. The kit contained everything I needed, except the milk, as well as detailed instructions.

The kit uses citric acid to encourage the curds to separate from the whey. The resulting cheese is vegetarian and, except for a bit of salt, also included, it doens’t need any special cultures or other additives.

The instructions were simple and straightforward and I followed them to the letter. But something went wrong. My curds were so small they went straight through the cheesecloth (doubled-over). Instead of the pound or so of cheese that I had expected, I got three table spoons. 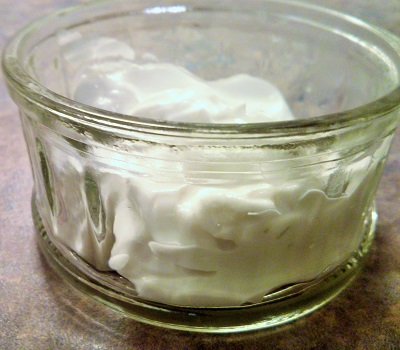 The first attempt: lovely, but less than I expected from 2 litres of milk.

They were very delicious table spoonfuls of creamy goats cheese and we added it to bowls of pasta and sugo. The next thing was clearly to get bigger curds, so I get more cheese.

Having failed, somewhere, somehow, to follow the instructions so that they worked, I did some research. I found that sometimes it takes longer for curds to form than you expect, and that goats cheese curds are very small indeed. If curds don’t seem to be forming, one can add more acid, and leave them to settle for longer.

Many of the recipes I found was for cultured cheese. I didn’t have culture, and wasn’t trying to entice cultures to enter my milk mixture. It’d be very interesting to see how adding cultures can change, and direct, the texture and flavour of cheese you’re making. I might get another kit, maybe the mozarella, to play around with cultures. But for now, I’m happy to be just be playing with milk and acid.

I know curds formed because a greeny-yellow liquid showed when I gently swished the milk around. They weren’t very firm because the liquid looked like milk,
it didn’t seem to thicken or else change much in texture. I decided to have another go but this time, to make a couple of important changes.

Nothing’s getting through here!

One of the recipes I saw used lemon juice to curdle the milk. I decided that half juice half acid would be an interesting thing to try. Well, I decided that using lemon juice would be interesting and then ran out of lemons.) I could see that it worked: the moment I put the lemon juice acid mixture in the hot
milk it changed texture. I mixed it carefully and left it for ten minutes before draining.

Forget the cheese cloth – I used a kitchen towel to drain the whey. I chose quite an old one, a soft, cotton one with a loose-ish weave. It worked perfectly: the whey drained and the curds stayed. When most of the whey had drained, I hung the curds to drain more slowly for 1.5 hours. 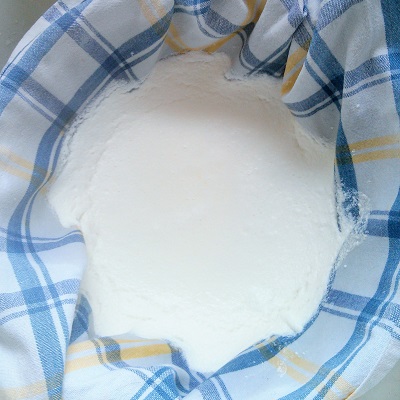 This batch was less creamy than the last but there’s a lot more of it. It’s tart, distinctly lemony – in a pleasant way – and with a fine, almost crumbly texture. I mixed in a teaspoon of salt into the now cool mixture and packed it into rammekins. I got almost three. (I would have got more, if I hadn’t been tasting it.)

So, what did I learn? 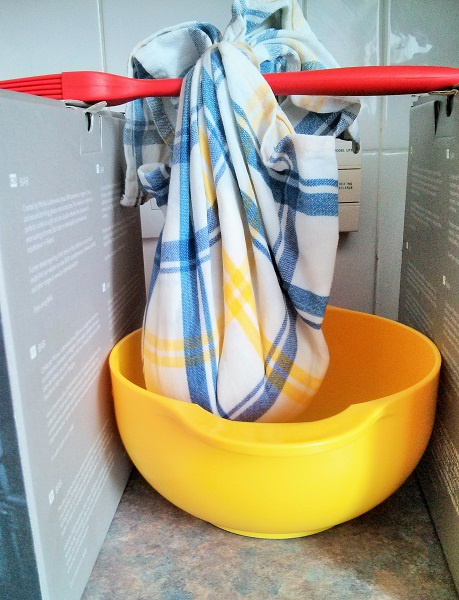 And draining some more…

I’ll make goats cheese again. My next experiment is to see if I can keep it really soft and creamy. For this I need to heat it slower so that I can make sure that it doesn’t go higher than 80-82C. (Crumbliness comes at higher temperatures, apparently.) I’d like to mix cow and cheese and see how that tastes. And, of course, there are all kinds of ways I can flavour the cheese.

I did mine with two litres of milk, but you can make it with one litre. That’s should give you a ramekin and a half of curds, or enough cheese for pasta for
two and a few crackers after. 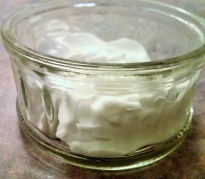 Save Print
Preparation time
10 mins
Cooking time
1 hour 30 mins
Total time
1 hour 40 mins
Making cheese at home is pretty easy and very satisfying. This gives a soft goats cheese, a fresh or cottage cheese, that will keep for a week or so in the fridge.
Author: Edinburgh Foody
Recipe type: Cheese
Cuisine: British
Ingredients
Instructions
3.5.3208
On the night, I made pasta with mushrooms, onions, thyme and peas, and sauced it with my fresh goats cheese. The cheese added a subtle flavour and lovely creaminess. 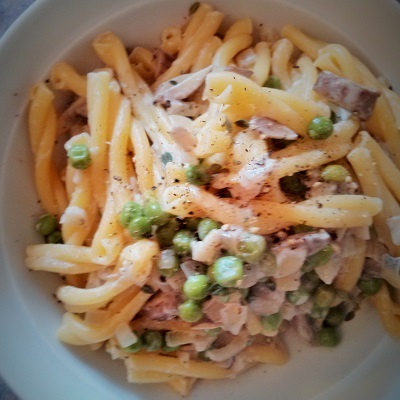