Connage Highland Dairy is in Inverness. It is all the things we like: family owned, organic, dairy. Dairy farming has had a lot of attention in the media recently so you’ll be aware that milk production is a difficult way to make money. In 2006, Connage decided to try a different way to use the milk, to make it into a higher-value product: cheese. They constructed a dairy and Connage is now a prize-winning artisanal dairy with customers all through the UK and Europe, as well as farther afield.

I was invited to meet Callum and Jill of Connage Highland Dairy, and to try their cheese at Pickles of Broughton Street. 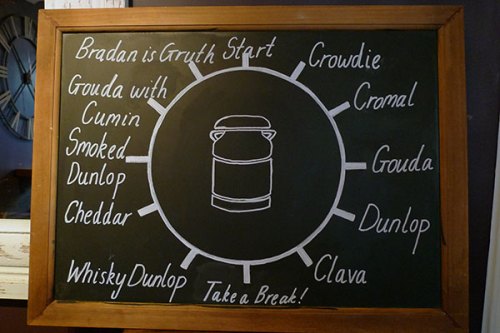 The Connage herds are a mixture of Norwegian Reds, Holstein Friesans and Jersey mixes. They graze in summer and in winter they are fed on silage and a blend of peas and other foods. They provide a good mixture of rich milk, perfect for creating well-tasting cheeses. The dairy’s output has grown since opening and there’s still room for expansion. Connage makes about 50 tonnes of cheese, which represents half the dairy’s capacity.

A ten-cheese lunch is a heady thing. Having stuffed myself with all the cheese I could manage, I spent most of the afternoon in a delighted coma. Maybe trying all cheeses on the same day ins’t something to recommend. My tip is to choose a couple, or three, and enjoy!

Crowdie is a curd cheese, that is, a very young soft cheese. It is fresh and citrussy in flavour, reminiscent of cottage cheese (which I adore). It’s the kind of cheese I want to spread on a piece of home-made crisp bread, or heap high on a slice of rye bread. (It’s also rather nice with jam.) It’s wonderfully versatile and can be used in cooking. Because it is so young, it should be kept cool.

Bradan is Gruth mixes Crowdie and hot smoked salmon into a rich, wonderful paté. It has flavour enough to work with very dark bread or biscuits but is also lovely as a dollop to be eaten with a fork. 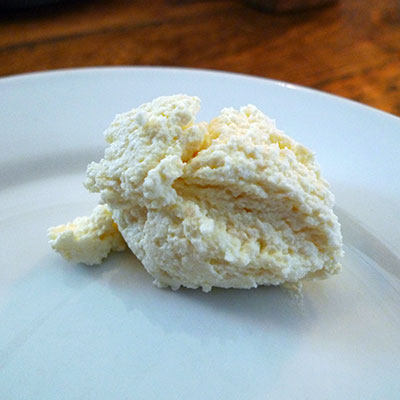 If Crowdie is the baby of cheese, Cromal is a teenager. It’s made with summer milk, which has made this year a difficult year for producers: lack of rain means low grass yeilds and thus not enough free forage. Jill told us that dairy farmers on some of the islands have had to sell their herds because they’re running out of winter feed already.

Cromal is semi-firm, mild, acidic and slightly nutty. Generous slides on white toast would be great for Sunday breakfast.

Connage started making Gouda to have something to offer children who visited the dairy. It’s a milder cheese than their Cheddar and is popular with kids. Connage starts serving it at 3 months, the one we tried had matured for 2 years. It had that slightly rubbery texture that good Gouda has, and a light, salty flavour.

They also make a cumin Gouda which tastes like Christmas and cold winters. It took me right back to my childhood when a cumin cheese was traditional on the smörgåsbord.

Traditionally, Dunlop is made with 100% Ayrshire milk. The Connage herd is mixed, so their version is a little different but not less tasty. It’s lightly acidic, has a crisp, short flavour, and reminds me a little bit of Wendsleydale in flavour. It is also somewhat crumbly. The Connage Dunlop is matured for 5 -7 months.

The texture of the whisky Dunlop is creamier, less crumbly. The addition of 2% whisky to the curds makes an interesting change to the cheese. It has a subtle hint of whisky sweetness to the nose, which continues on the palate.

Callum smokes the smoked Dunlop himself, using shavings from whisky barrels from the whisky used in the whisky cheese. He manages to smoke it without changing the texture, instead introducing a deep smoke flavour. The flavour goes all the way through, stronger on the outside, but still satisfyingly rich on the inside. It’s the best smoked cheese I’ve had, a nice interplay between texture and flavour. It would go very nicely with a dram of Talisker or Lagavulin. 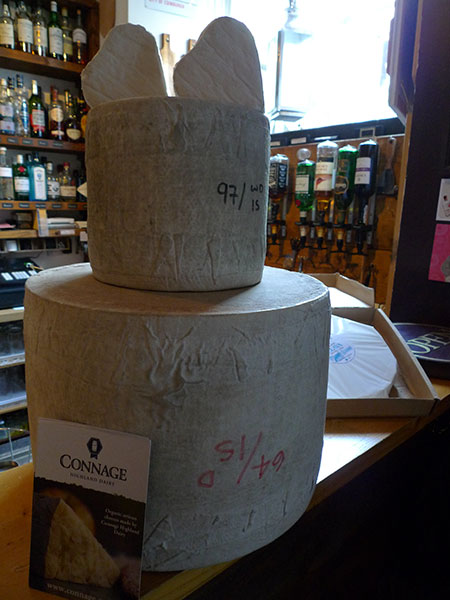 The Cheddar style cheese had good flavour and texture. It was creamy, perfect for melting, and had a clean nutty flavour. It was well matured and although it didn’t quite make my palate tickle in the way of very mature cheese, it was close. I got a slight hint of pepper on the palate and enjoyed the crunch of crystals that indicate a well-matured cheese.

I’ve left my favourite to last. The Clava is a Highland brie. It has a firm white rind and, when fully ripe, a creamy, ivory inside. The one we had was perfectly ripe. The aroma was clean, a little mushroomy but not as big as the flavour – probably a good thing. The Claa’s flavour is poweful, reminiscent of truffle and mushrooms, and moreish. The deliciously runny strong cheese is as lovely on an oatcake as on a spoon. 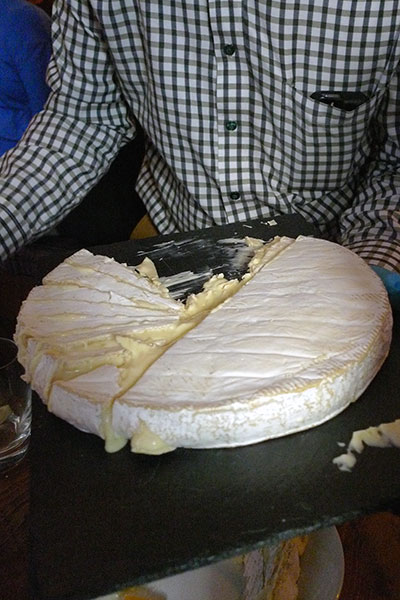 If you’re in the Inverness area, pop in and visit the Cheese Pantry. If you’re in Edinburgh, you can find their cheese at Mellis and other resellers. Connage also has an online business.