Imagine going into a bar in your town and you find rubbish strewn across the floor. You’d probably walk straight out, wouldn’t you? Not in the Basque Country. This is a sign that the bar serves very good pintxos. These are small morsels of food, often but not always, served on top of sliced baguette. The Basque language uses a lot of xs as there are no letters for a ch sound – you pronounce pinxtos as pinch ohs. 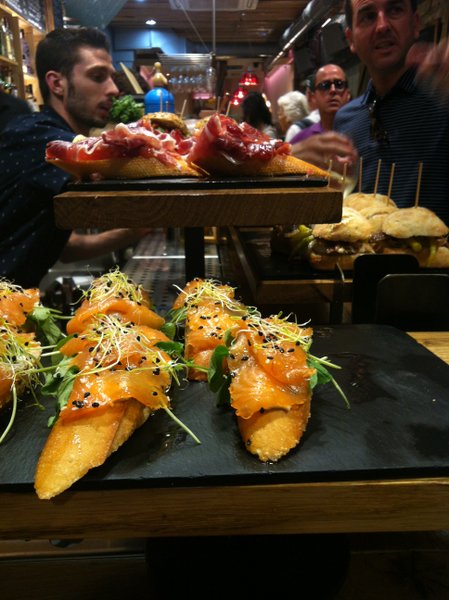 If you are out with friends of an evening, you will visit a favourite bar, have a glass of wine (not too large) and one pintxo. Your fingers will probably be greasy, you grab a serviette and throw it and the cocktail stick that might it holding it together on the floor, finish your drink and head out to the next bar and do the same all over again. 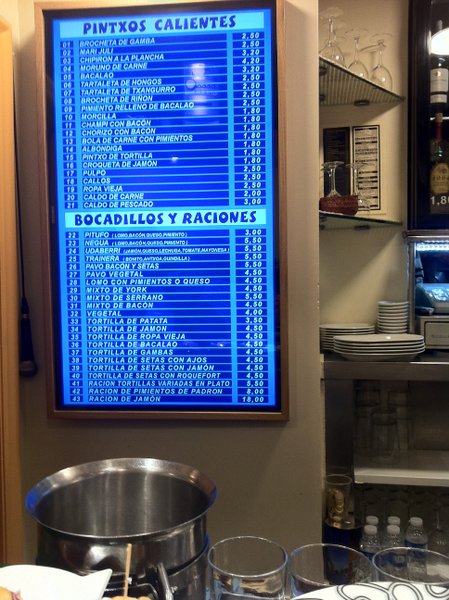 I am in Donostia, to use the Basque name, or San Sebastiian in North Western Spain. Home to many Michelin starred restaurants including (according to the 50 Best Restaurants in the World 2015) the 6th (Mugaritz) and the 17th (Arzak) It is safe to say the residents are passionate about their food. 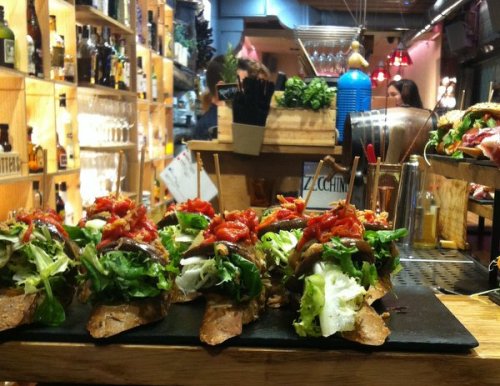 Pintxos tend not to be vegetarian, these are an exception

Pintxos are topped with local ingredients. Fish and seafood feature heavily – anchovies (which are not salty like ours) prawns, crab, tuna and salmon. There’s naturally plenty of jamon (ham) but also black pudding and chorizo. Each bar has its version of the standards – prawns on a stick for instance which are cooked freshly as you wait or savoury pork belly. Some will change seasonally, there was plenty of white asparagus when we visited in June. 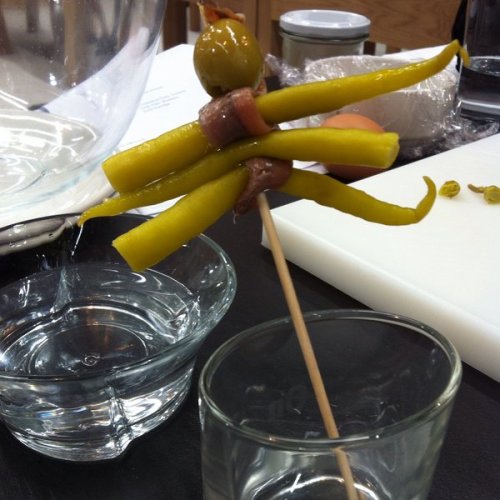 There’s one cold pintxo called the Gilda created to commemorate the role Rita Heyworth played in the film of that name. In Franco’s time this film was banned and they only way to see it was to go over to France – the border is close by.

But things are changing. Whilst the traditional pintxos are to be found, chefs are being influenced by the Michelin starred chefs particularly in presentation. We saw towering pintxos that needed dismantling before eating, ones served in glasses and different shaped plates. In another, they were pushing the boundaries and serving small portions of slow cooked veal cheek, pig’s ears and pig’s feet. These were billed on the menu as Minister’s feet – we didn’t find out why but one can imagine! Strangely enough for all the bread used, there is a dearth of good bread bakeries and the bread used is mass produced and bland – a good foil for the ingredients I suppose. 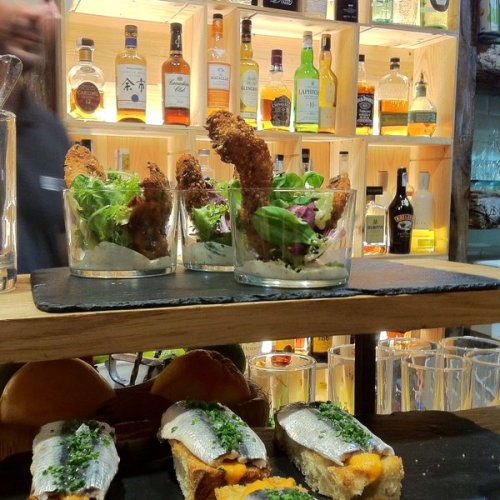 Looking for all the world like a Loch Ness monster, this is a chicken pintxo

Depending on the bar, pintxo cost from 2 euros 50 to around 5 euros so reasonable if you pace yourself. Totting up and paying is an art in itself. The barman will keep a friendly eye on on what you are eating, but it is up to you to indicate how many you have had and pay accordingly. In one more upmarket place, however, we did notice the staff were equipped with Ipads they were using to keep a tally. You may ask about dessert. You may if you are lucky find a token sweet item on the menu, but it will be hard to find!

If you head to San Sebastián / Donostia it is well worth taking one of the pintxo tours. We went on one organised by San Sebastián Food who took us to 6 different places carefully chosen to show the different types of pintxo and the different types of bar.Our guide, a local named Ana, made us feel right at home and she even sent a list of the places we’d visited and other recommended spots to visit after the event. 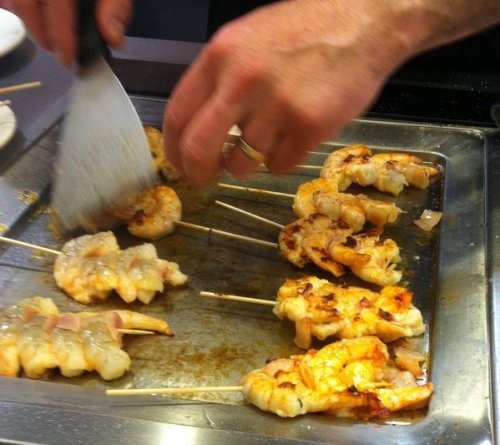 Many pintxos are cooked to order – prawn brochettes are found everywhere

Try your own pintxos

Larger than canapés, pintxo would make a great lunch. It’s fun to be creative with your local ingredients. Purchase some bread such as sourdough or rye from your local artisan bakery. Gather meats, fish  or vegetables and get creative. Roast the vegetables with herbs for extra flavour, pile onto the bead and drizzle with rapeseed oil, add your chosen protein and enjoy.

San Sebastian is easy to reach by plane. We flew into Santander from Edinburgh which is an easy two hours drive. Bilbao is even closer. Donostia/San Sebastian has been designated the European Capital of Culture in 2016, so time for a visit! The bus service is excellent in the city – parking is a challenge. The San Sebastian card is available from the Tourist Office for 16 euros which gives you 12 bus trips which can be shared between two people.