Regular Edinburgh Foody readers will know, from endless repetition of this fact, that I’m Swedish. I was weaned on salty licorice* and cinnamon buns. I grew up on crisp bread, herring and cured salmon. Smoked reindeer heart is something I have eaten without finding it at all weird. I think meatloaf should be made from pike or moose. I like a bit of lingonberry jam with my black pudding. I think cider should taste like pop. I know the frog song** (at least the first verse). But as you know, I live in Edinburgh, and have done so longer than I lived in Sweden, so the Swedish thing isn’t all that important. I don’t miss Kalles Kaviar*** one bit.

Saying that, when a Swedish or scandinavian venture opens, I get excited. No more so than when Akva opened a mere 20 minutes’ walk from my home. 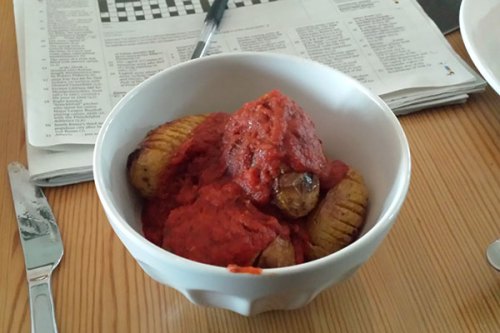 Some ten years ago, two bold Swedish entrepreneurs decided to open a pub in Leith, to create somewhere friendly, with a community ethos, that offered more than just sticky floors and beer. They opened Boda Bar. That first pub was soon followed by Sofi’s and Victoria. Bodabars, the group, have since expanded with Joseph Pearce’s and Hemma.

Not that long ago, a new place opened. I’m delighted about Akva because it is the first of the Bodabars that I can easily walk to. I have a new local!

Akva is on Edinburgh Quay, in the large corner unit that was once Cargo. It’s bright, colourful and welcoming. There are kids corners with toys and painting materials, a beer garden, as well as an upstairs that can be used as a venue. They sell drinks, make cocktails and serve food. I’m fond of the Bodabar style of cooking: it’s varied, with a strong Swedish bent. There are salads, burgers, smørrebrød (open sandwiches), Hasselback potatoes bravas and hearty mains. I enjoyed the salt beef (not the prettiest dish, but a very tasty one) with potato rosties, the rosti and salmon is fab, the trout salad is divine! Friends have enjoyed the burger and I hear good things about the croque too. Carnivores, pescatarians and vegetarians are all catered for. And if all you want is coffee, then that’s OK too. 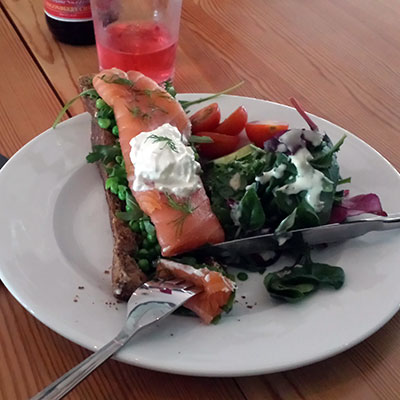 Akva is a cosy place that welcomes everyone – kids until 20:00, dogs all the time. I feel very much at home there and it’s not because it feels like a Swedish bar. I don’t know if it does. (When I left the country, I couldn’t afford to go out much, so I don’t really know what a typical one would be like.) They don’t want to be ‘just’ a pub.

The community ethos means that as well as eating and drinking, there are other things to do at Akva and the other Bodabar venues. Scransalon takes place upstairs in Akva in August, Wednesday’s are open mic night and there’s Latino dancing some Fridays. I took my mother, and C’s dad (at different times) to Akva, and have met friends young and not so for lunch there. It’s a great place for a drink after work, or a long, lazy weekend afternoon. Visit, and tell me what you think. I hope you like it as much as I do! 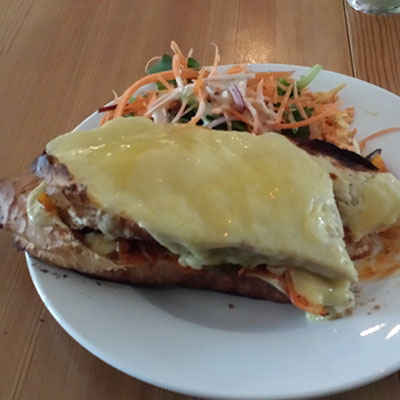 * Licorice with ammonium chloride in it. Oh! The ecstacy of joy.
** It’s about the weirdness of a range of animals and had actions. We sing it at midsummer, while dancing around the Maypole.
*** Think salty taramosalata in a tube.