Joseph Pearce: the crayfish party is a Swedish favourite

Crayfish. Some countries go mad for these little critters. They are eaten all over the world but they are eaten with particular fervour and ceremony in Sweden. The Swedes  lure crayfish out of the murky waters they favour to pop them into boiling dill-flavoured liquor and transform them from brown-black wall flowers to bright red belles of the ball. It is my immense pleasure to announce that a traditional crayfish party can now be experienced in Edinburgh.

For a many years crayfish could only be fished in late summer. Stocks are no longer as depleted as they were, so there’s no longer a crayfish equivalent to the “glorious 12th”. For many years it was almost impossible to get Swedish crayfish and we’d settle for frozen Canadian, Turkish or Louisiana crayfish. In August, the newspapers would be full of reviews, comparing the different flavours and textures of the crayfish about to emerge on the market.

So popular are these mini-lobsters that Swedes collect in great numbers, outside, under a fat August moon or with paper-lights to emulate one, to eat crayfish, drink snaps and sing songs.

Joseph Pearce, an Edinburgh bar now owned by lovely Anna  Christopherson and Mike, throw a crayfish party to warm the heart of any ex-pat Swede and tickle the taste buds of curious Brits. (I am willing to share this information only now, when the parties are over only so that I’d be sure to get a ticket. Next year, I’ll do a more timely reminder. … Once I’ve secured my ticket.) 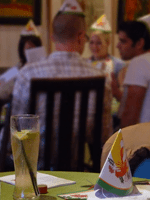 It’s a really good party, which Anna hosts with warmth and humour. Me and my Swedish-speaking friend went to the last of four parties. We had plenty of crayfish, an ocean of snaps and a wonderful cheese flan. When we arrived, we were treated to a lovely snaps-based welcome drink and got  not just traditional hats and bibs but a booklet of songs. Hurrah! There should be no snaps-drinking without singing, so Anna lead us in song every five minutes or so. Glorious fun.

Back to the crayfish.

Eating crayfish is a messy business. They are cooked in a dill-flavoured stock, that gives them much of their flavour. It is slightly salty and very tasty. The first thing to do with your crayfish is to suck as much of its juices out as possible. There are different ways of doing this but most of them involve audible slurping and vigorous crayfish kissing. Mmm.

Next, take off the shield, or twist off the tail, and have another good slurp, avoiding stomach and gills but taking in the other brown meat.

Now, tear off the tail (if you haven’t already), break the protecting carapace on one side and fish out the prize of the meal. Move on cracking claws and chewing legs, sucking as much of the flavour and flesh from the carapace as possible.

When I grew up, we would eat the claw meat, suck out the juices from the body and the leg but save our tails until we had enough to put on a piece of toasted white bread (with a slick of mayo for glue). We’d also put the heads on our plate to show how many we had eaten… At JP’s, we were much more discrete and ate the tails as we uncovered them. 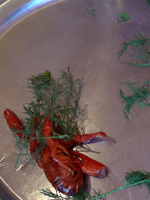 The last crayfish. Go on, have it.

Crayfish is fiddly and  you don’t get that much meat per crustacean but it is incredibly tasty. They have much more flavour than the crayfish tails in brine that you find in fish shops, although these are good for salads and creamy pastas. The fun of a crayfish party is in interactive eating and the enjoyment of chat and song. We had all of that. The cockles of my homesick heart were warmed and my stomach stuffed full enough with delectable crayfish that I should last another year with nothing but crab, lobster and langoustine to see me through. It’s a hard life, but Joseph Pearce’s makes it that little bit easier.