After the excesses of Christmas and the New Year festivities, it’s at this time of year that most people succumb to those New Year resolutions, which are often broken by the end of first week.

Whilst I’ve never been one for diets (most of my family would probably rudely say ‘you can see’!), I do believe that trying to cut back or take a more moderate approach in January is the way forward; well until the 29th of the month at least as it’s my birthday. So it’s going to be soups for lunch for me this month, served with some oatcakes. 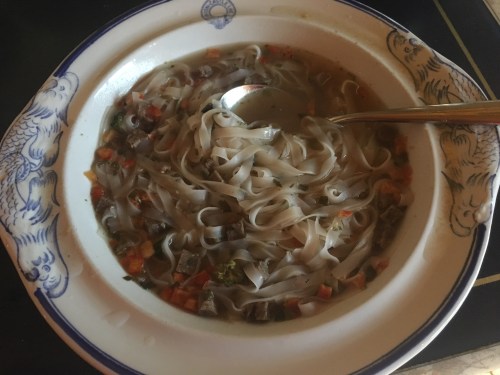 Hong Kong street beef – fiery and spicy without being too hot

I usually prefer to whiz up my own soups as it means I know what’s gone in them and they tend to work out cheaper too. However the supermarkets have some very good ready made versions available too, which I will sometimes opt for if time is of the essence.

I’ve also been trying out some new Oriental soups in a cup, Mr Lee’s Noodles. Sadly these aren’t available in the supermarkets just yet although you can buy them online right here. At £17.94 for a six pack, that works out at £2.99 a pot, which I’d argue is a little on the pricey side, compared to some of the soup cartons you can buy in the supermarkets. 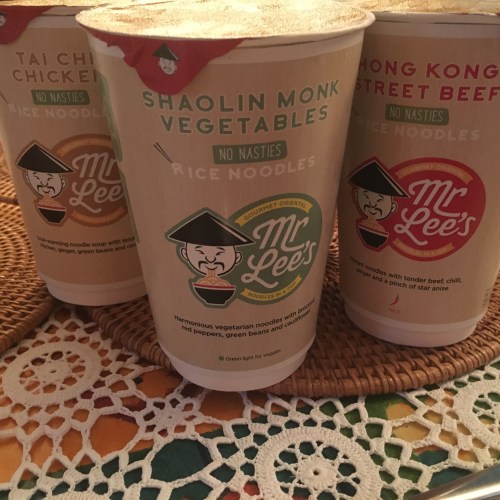 However the manufacturers don’t seem to be trying to corner this side of the market just yet and are instead focusing on their partners, such as hotels, airlines, contract caterers and events, with a kiosk available that vends the product. If you were at work, you might be prepared to pay £3.00 for a quick nutritious fix rather than popping out to the local sandwich shop, where you can easily spend £6-10!

Coeliac UK certified gluten-free, the manufacturers claim that these instant cup noodles are made using only the best freeze-dried ingredients with absolutely no nasties, which is apparently a real game changer for gluten-free foods.

Low in salt, sugar, saturated fats and calories, each of the soups contain between 51-55 calories per 100 grams, which is less than a slice of white bread. However, it’s actually more important to think of how nutritious food is. One of their pots is more nutritious because it contains a mixture of ingredients, offering a wider variety of vitamins and minerals.

Whilst I’m no nutritionist, Mr Lee claims that freeze drying is actually better that dehydrating, which most other cup noodles do and shouldn’t be confused.

Aparently freeze drying is like putting food into suspended animation. It locks in all the good stuff. Once you put the water back in, the food comes back to life, complete with its taste and nearly all its nutrition intact.

Meanwhile dehydrating sucks all the life and flavour out of the food. So you get very little taste and very little nutrition, making the whole thing kind of pointless.

These noodles are super easy to prepare. You pour hot water on them, replace the lid and wait three minutes. It’s then ready for eating. 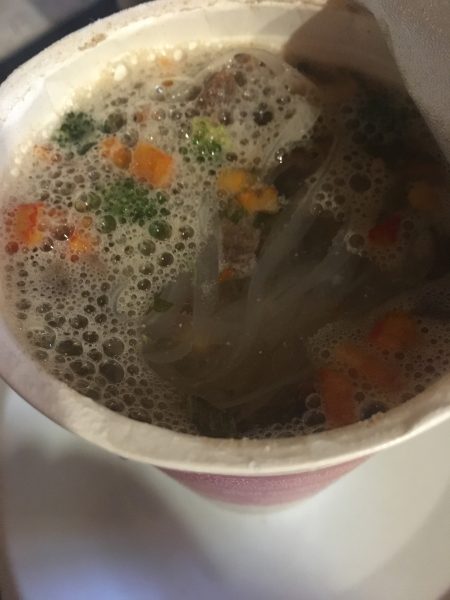 I particularly liked the Penang Chicken enhanced by the addition of coconut milk, cauliflower, ginger and turmeric. And with the health benefits of turmeric that I recently heard talked about on Radio 2’s Jeremy Vine show, I think this would be the one I would be opting for on a regular basis.

So whilst this product might not be readily available in the supermarkets, if you see it at a hotel or an event near you, and are looking for a quick, healthy snack to fill a gap, give Mr Lee’s Oriental Noodles in a Cup a go. They’re award winning too – so they must be doing something right.