The Galvin brothers have two restaurants in The Caledonian hotel. We wrote about wine tastings at the Brasserie Deluxe last year. This January, Pompadour by Galvin, the restaurant upstairs, has opened for Saturday lunch. Did I want to come and review? Oh yes! 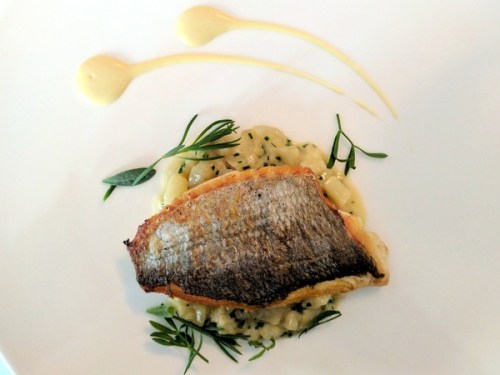 The sea bream of my dreams. The Jerusalem artichoke fricassé was gorgeous.

Pompadour is in a beautiful room: white wood work, hand-painted light blue wall panels and a dazzling pink chandelier stay true to the rococo connotations of the name. We sat down at a table with crisp white cloth and silvered salt cellars. It didn’t take long before a kind man brought us glasses of champagne.

An hour earlier, I was wearing a sugared almond pink hat and standing with a thousand or so others near the US embassy. We were on Edinburgh’s Women Sister march. I had mentioned that I might have to leave early because lunch comes before protest and had jokingly said I wouldn’t want to miss the champagne. I was so pleased I didn’t! The Galvin champagne is excellent. Full flavoured, fresh and appely on the nose, rounded and delicious on the palate. We sipped champagne and snacked on crisp bread with whipped cream cheese while choosing what to eat.

The menu is elegant and paired down: one each of the fish, meat and veggie options. The style is French, using local and seasonal ingredients. Rather pleasingly, there’s a separate menu for vegetarians so Christopher had more than one options per course.  As well as the a la carte menu that we chose from, there’s a menu gourmand, a five-course tasting menu.

I selected the smoked eel over the poached fruit and speck or risotto. Eel is a fatty fish and can sometimes taste muddy. When it’s good, like this delicious morsel, it’s soft and moreish. The smoke level was just right, the bisque delicate and sweet, the bed of fennel crunchy and fresh, the roux perfect. The dish worked beautifully.

Christopher opened with mushroom and truffle risotto. It was velvety, more liquid than the version we make at home and the rice had good bite. It was beautiful and reminded us what a risotto should be. 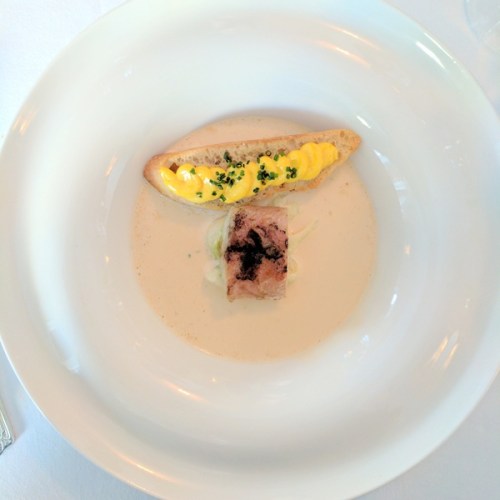 Smoked eel with roux and bisque, the richness balanced by crunchy fennel.

I followed up the eel with sea bream with Jerusalem artichoke fricassé. Seeing the chicken tagine served inside huge black tagine pots I almost wished I’d chosen that, if only for the spectacle. My fish was perfectly cooked, the skin crispy, the artichoke rich in umami. Shoots of young tarragon added refreshing bursts of aniseed.

Christopher’s thyme gnocchi were fried for extra texture. They were served with smoked Cuddy’s Cave cheese,  charred onion and chestnut puré and were just as good as that sounds. 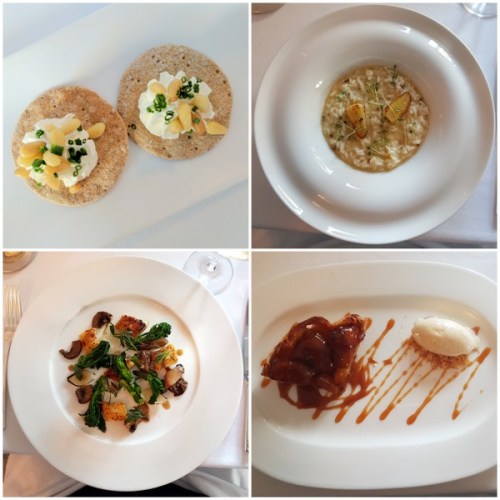 There might have been a little bit of a conversation about who would have the tree tatin. Christopher won and I had the cheese (and his ice cream, on its crunchy praline crumb).

The tarte tatin was just right: the apples were soft but retained structure, the caramel dark but not burned, the pastry buttery and golden.

I enjoyed the cheese, a smoked cheddar, a blue and a ripe and flavourful white mould, with rye and charcoal, and thyme-infused apricots crackers. I’m sorry, but I forgot to ask what the cheese were and scoffed them with delight. They were ripe and perfect for eating. 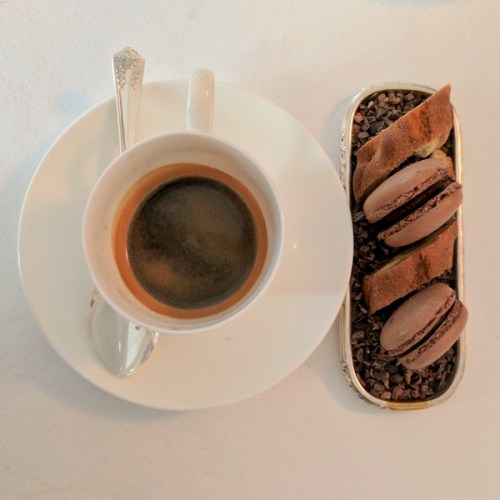 Espresso and petit four at Pompadour by Galvin. Love that the petite fours rest on cocoa nibs.

Saturday lunch at Pompadour by Galvin is £29 for three courses, or £45 for the menu gourmand (a £40 wine pairing is available). It’s a lovely way to spend an afternoon with great food, attentive service and gorgeous wines in a lovely environment. When we visited, a wedding party – the groom with a rather snazzy full white beard – sat at one end of the room and three friends in their late twenties in the other.  A third table was home to Edinblogger and at a fourth, a good amount of fine wine was being consumed. Everyone had a good time and was treated with equal speed and attention. Pompadour by Galvin is equally suited for an afternoon outing, a treat or special event.

Caroline lunched at the invitation of Pompadour by Galvin.

* I wanted to name each section of this post after roccoco paintings but soon realised that would be too obscure and pretentious. Imagine if you will that the sections are called The Tête à Tête (William Hogarth), The Confession of Love (Jean-Honoré Fragonard) and The Love Lesson (Jean-Antoine Watteau). Light hearted and tasteful, just like lunch.