Our relatively new team of four at Edinburgh Foody love a team get together to talk all things food and drink.

We were recently contacted by West Coast Foods, a lovely little butcher’s shop in Prestwick, Ayrshire, who have an online offering, to see if we would like to try out their wares.  It seemed a good excuse for a meet up to discuss our blog direction and some much needed downtime too.

Kerry offered to host and cook up a storm, using some of West Coast’s recipes. We also tried some delicious desserts, courtesy of Waitrose and some iQ Chocolate that Nicki had got her hands on. And Caroline made a traditional Swedish cake to celebrate Kerry’s birthday at the end of January. It’s fair to say the team pigged out big time.

West Coast Foods concept is simple. As little as 30 years ago, you could walk down any high street in Britain and buy your food from a variety of local shops. The butcher, the baker, and the greengrocer, all supplied the ingredients needed for the family meal. These weren’t premium items with luxury price tags, they were just good honest food from the traditional rural farms of Britain.

Obviously things have changed with the rise of processed foods but West Coast Foods want to try and maintain the good old-fashioned values.  For them it’s all about quality and service.

By bringing back the traditional high street butcher, they believe that quality meat and good service should once more be the norm; not the exception and not merely available to a chosen few. Their lovely little butcher’s shop in Prestwick, Ayrshire, has been a sure success for over two years now and they felt the time was right to offer the same standards of quality and service to the growing number that wish to buy meat online. And so their online butchers was born.

They bring the finest local Scottish meat and prepare it all in-house. Their award winning master butchers, two of which are Scottish champions, butcher all of their meat, by hand, from whole carcasses, using traditional skills passed down through the generations.

In meeting modern needs with traditional values they offer their customers the same high standard of service and quality meat that their customers expect from their high street shop, and what’s even better, they guarantee next day delivery if you order by 10am. Temperature controlled packaging ensures that the meat arrives in exactly the same prime condition as when it was packed for delivery. 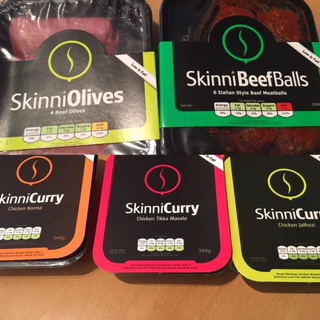 The Skinni range is healthy yet very tasty

Their Skinni Range was created through the innovation of every day food products. As more people have become conscious of what is really in their food, West Coast Foods set out to create a healthier alternative to some of the much loved products on supermarket shelves. So these products are high in protein, low in carbs and most importantly, low in fat.

The package arrived promptly by DPD, delivery times are given, and you can even track your package via an online app and choose options of where the package should be left if you are out, which suited Kerry well. It was a very quick reliable service, with no flaws.

Beef olives are a bit of a mis-nomer. They have nothing to do with the olives that grow on trees but instead form the base of a braised meat dish popular in Scotland since the 1600’s. They are thin beef steaks, wrapped around a filling of sausage meat, which in this case was beef.

Kerry adapted the recipe by starting off with a mirepoix of onions, carrots and celery to add sweetness to the dish and adding some Chantenay carrots, which she halved, before pouring on a jar of Tesco’s ‘Rich and Smoky Tomato and Pancetta Italian Pasta Sauce’, with the addition of a bit of water, rather than using passata. The finished dish was served with some buttered tagliatelle.

The Morrocan meatballs recipe calls for ground cumin and coriander but they don’t appear to be added at any point in the method – so don’t forget to add them. Add the spices when you have finished frying off the onion and peppers.  Kerry actually used some Turkish spice she had in her cupboard instead.

She used giant couscous prepared with stock and pepped it up with chopped coriander and parsley to serve alongside the meatballs.

The team’s verdict on the dishes was that they were the perfect comfort food for a cold February evening. There was no scrimping on the meat used and as the meatballs were quite dense, you could probably suffice with just two, rather than three; but it probably depends on your appetite.

Not content with one dessert, the team pigged out on three.

Caroline had spent her afternoon making a traditional Swedish celebration cake, a fatless sponge, with cream, fruit and chocolate.

The EdinburghFoody team also sampled a Salted Caramel and Chocolate Tart (£4.79) and 6 Raspberry and Rose Profiteroles (£3.99), courtesy of Waitrose. 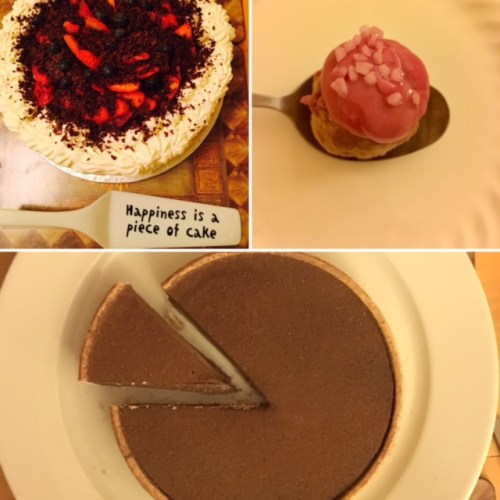 Sugar rush – the EF team sampled a trio of desserts

Nicki and Caroline thought the caramel tart was too salty but Kerry loved it, with the oozing layer of salted caramel and rich Belgian chocolate ganache, dusted with gold sparkle. She’ll be seeking this one out again very soon.

The raspberry and rose creme patisserie profiteroles, were hand-finished with raspberry fondant and rose sugar crystals. Little bite-size mouthfuls, these were the least favourite of all the desserts, with everyone declaring them ‘too sweet’. However this might have been something to do with just how many desserts had been sampled.

The lovely team at Waitrose also sent some cheese but we didn’t have room; so these will be sampled next week at another team meet up, hopefully along with some home-made cheese scones. We’ll let you know how we get on. 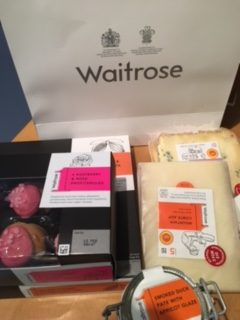 Waitrose sent the EF team a selection of delights to sample

The team finished off dinner with tea and coffee, served with some iQ Superfood Chocolate (£1.99 per bar), which Nicki had sourced.

iQ Chocolate, is Scotland’s first bean to bar chocolate maker with an assured focus on creating positive calories for healthy eating! Kerry, a self-confessed chocaholic, was particularly looking forward to this sampling, with it being declared healthy and each bar only 197 kcal. 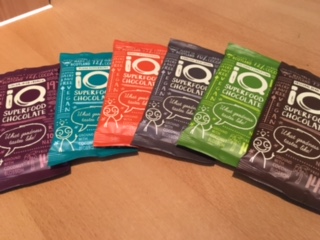 Nut free, gluten free, wheat free, dairy free, soya free, iQ’s chocolate is free from all 14 allergens, and is low on the glyceamic index. In addition it is high in fibre, copper, manganese and phosphorus and it’s a source of magnesium and iron.

If you’re looking for a chocolate fix, iQ Chocolae would be a good option to go for. Even Kerry commented that she would struggle to eat a whole bar at one sitting. Made with 70-72% Peruvian cocoa, the flavours are intense and being dark chocolate, they pack a punch. So a little goes a long way.

The world put to rights

So it’s safe to say, some great dishes and recipes were sampled, bellies were filled and great chat ensued and whilst the Edinburgh Foody team certainly put the world to rights, there wasn’t much chat on business matters. Oh well, we’ll just have to organise another catch up very soon!

Thank you to Waitrose, West Coast Foods and iQ Chocolates for all the samples.