I am sitting with Chef Peter Woods in the lovely modern lounge of the Four Seasons Hotel, St Fillans, Perthshire (the Hotel Inspector Alex Polizzi would definitely approve approve). We are discussing his passion for smoking salmon which could just be bordering on obsession. 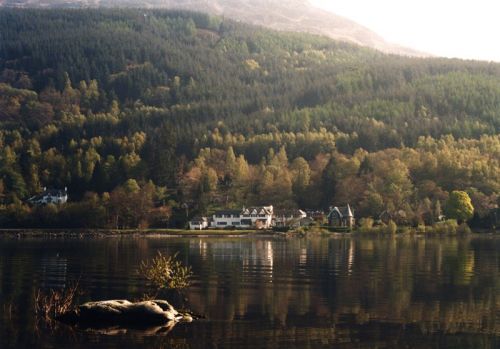 Peter has a purpose built smokehouse shipped from Canada. Currently he can smoke 12 sides at a time. A newly enlarged smokehouse will enable him to smoke up to 80 sides of salmon. Peter explains that the secret to a good smoked salmon is the cure. He creates many different cures including Teriyaki, Whisky and Thai spice (a big favourite for the local football club who order in regularly for events). He cures the fish for 6 days and smokes on the 7th making sure that he matches the type of wood chips carefully with the cure, such as maple to match the lemon and dill cure. I thoroughly enjoy the Teriyaki cure which is one of the amuses bouches.

The Four Seasons has an enviable location at the tip of Loch Earn. The scenery is breathtaking even on a day like today when it’s raining. Many of the tables in the Meall Reamhar restaurant have views over the loch. You have a lovely toasty feeling that you’re in the warm and dry but can still enjoy the view.

Peter recently returned to the hotel as head chef having previously worked there from 2004 to 2006. He sources as much of his produce as locally as possible. He explains that he no longer uses olive oil preferring to use Summer Harvest‘s rapeseed oil. Meat is sourced from the local butcher in Comrie who makes “the best black pudding anywhere” . The restaurant is also part of the Scottish Beef Club. Some ingredients such as the berries in the trifle come from Peter’s garden.

As well as the more formal restaurant, there’s also the Tarken bistro which is a firm favourite with locals and guests alike. Here the menu is more rustic but features fabulous fresh fish from the West Coast in the Chef’s Seafood Pie and some special recipe sausages from the butchers in Comrie.

Peter’s on his second stint at the Four Seasons. And since returning earlier this year, he’s adding new dishes to the selection such as rabbit. There two ingredients that are always on the menu, customers’ favourites, scallops from Scrabster and Scotch Angus/Limousin Beef fillet served with a seasonal sauce. Peter’s passion for fish comes through with perfectly cooked hake with an orange and watercress sauce.

Hake with orange and watercress sauce

He runs 3 menus which run in rotation – great for hotel guests who typically stay 3 or more days in one of 12 bedrooms or 6 chalets behind the hotel with equally good views over Loch Earn. Visitors come from all over the world – including recently, some Americans on a Beatles trail – they stayed in one of the chalets in 1964; and many walkers and Munro baggers.

It’s no more than 1 1/2 hours away from Edinburgh – well worth escaping to enjoy the food, the great service, the decor and location. 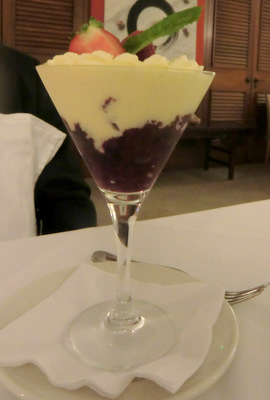