Kerry’s been busy at the Fringe over the last couple of weeks and one of her highlights has been George Egg: DIY Chef at the Gilded Balloon.  It’s a delicious, 5 Star show that any foody will love. It starts with a health scare – chest pains, a bad back from too much standing, “not great if you’re a ‘stand-up’” and a new mole, resulting in his wife banishing him to a life of kale smoothies and “no more cooking.”

For a self-confessed foodie that’s harsh, so he’s banished to the shed and “harbours his appetite for creativity” to work out how he can cook, using just the equipment in his shed.

His make-shift kitchen shed is recreated on stage, with a workbench, complete with a working sink made with a couple of buckets, the “empty bladder” from the inside of the wine box, acting as the water source, and an upturned broom stick holding his washing line of tea-towels. An old, vintage suitcase contains his armour of ingenious cooking equipment aka work-tools. Egg takes us through the rudiments of how he can make a three course meal using just the tools in his shed.  An Energer ENB484 wallpaper stripper steams his kipper and an egg sealed in small plastic bags, “the type you buy earrings or drugs in”; whilst a DeWalt air gun toasts his sour dough bread from one of his two sponsors, The Wee Boulangerie in Clerk Street, making it into croutons.

A desk paper shredder renders his sheets of pasta into linguini, which is cooked in a kettle and served with an aged Roquefort sauce, “slated” with individual pots of cream and milk, the type you might steal from service stations.

His main course, a beautiful steak from the second of this sponsors Saunderson’s Butchers on Leven Street, is cooked to perfection, with the aid of an oversized blow-torch, with a shovel acting as the pan.

It’s a delicious, fun hour of comedy and cooking, a cross genre show falling somewhere between stand-up comedy and a TV cooking show. 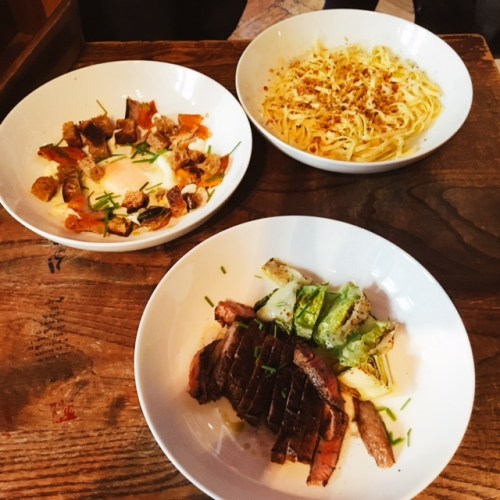 Eat, drink and be merry, and make sure you see this show, cos tomorrow you may die. And the best bit – you get to try what he’s made at the end of the show, and it’s surprisingly edible. Eat your heart out Masterchef!