Just before Christmas I noticed a development behind one of the bus stops on Dalry Road. Crossing the road and pressing my nose to the glass, I found a temple to Spanish ham: The Black Hoof. Last week, I finally made it into the shop for a masterclass in Iberico ham. I’m so glad I did. 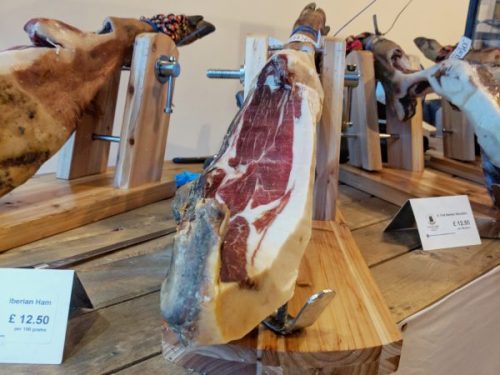 Iberico ham. The best of the best?

I mentioned the importance of DOP recently, and here’s another good example of a DOP product: Iberico ham. There are lots of different types of ham on the market. I grew up with the Swedish variety: a little salty, pink and plump. We’d eat huge amounts of it at Christmas and leave it alone for the rest of the year. As I grew up and travelled, I met other kinds of pork products. I’ve always had a weakness for salami and chorizo. But nothing beats a dry, Mediterranean style cured ham. I’m a fan of Parma ham. Call me impressionable, but I know think that of all of the hams, the acorn-fed Iberico is superior.

The master class runs on a Thursday at 18:00. It’s half an hour’s introduction to the region, the production method and the product. A perfect start to an evening of conversation and tapas, I’d say.

Iberico is defined by the breed, the animal’s diet, the region, the cut and the curing time used for the final product. I learned a lot that I’m not going to share (you should go and learn for yourself) but will say that my favourite is the bellota (acorn-fed) Iberico and that I enjoy the way shoulder (paleta – same process but different body part from the jamon) makes you work a little more for the flavour. I’m a famous hooverer of food so anything that slows me down is good. Iberico is rich and dark, sweet and salty, with a marvelous full flavour that continues to develop as you chew it. 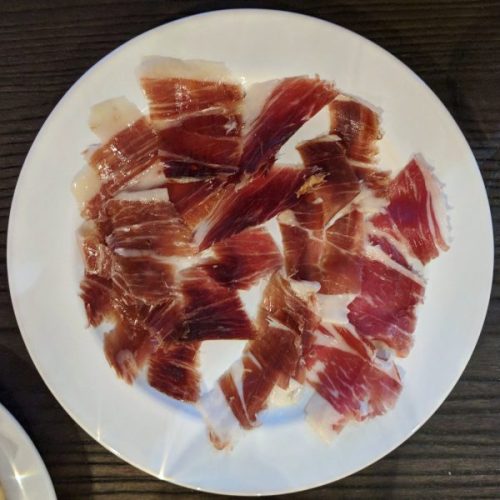 It’s BYOB so bring something nice to drink like an aromatic white or even prosecco. You don’t want the wine to overpower the flavour of the ham and a bit of acidity helps clear the palate between slices. An IPA or clean lager would work too.

The Black Hoof serves a simple tapas-style menu at night. It focuses on meats but you can also get padron peppers, cod croquettes, batatas bravas, mussels, octopus, crispy squid and other classical Spanish dishes.

As well as four types of Iberico we tried chorizo, salsichon (dried sausage), and two types of pork loin. Lomo is the fillet that runs under the ribs and lomito is the one that runs along the neck. Both are lovely. Lighter in flavour than the ham (it’s a leaner meat) they’re both sweet and deep in flavour. We also enjoyed Spanish omelette, Manchego, traditional tomato bread and olives. 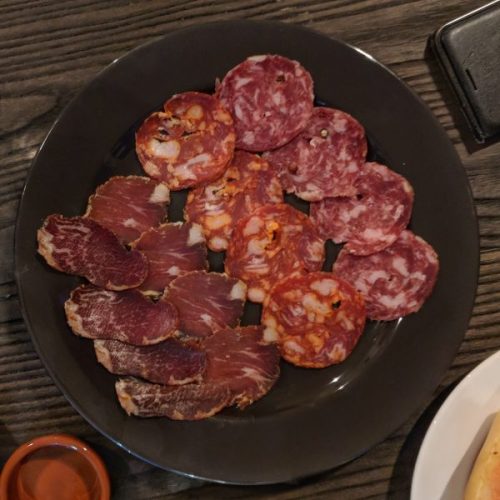 As well as the tapas menu, The Black Hoof does take-out sandwiches. The Iberico baguette for £3.5 is lovely and gives me a reason to leave the flat at lunchtime.

Anyone up for tapas and wine sometime soon? I want more bellota.

* There’s a clue in the name: pata negra, a generic name for Iberico refers to the pig’s black feet.

Caroline was invited to a master class by The Black Hoof.