Edinburgh has festivals aplenty, and food gets a look-in too. We have two other events that bring together foodies, producers and chefs. This year, like most years, I went to both. They are, in many ways, different affairs. Here’s what you can expect (and what I ate and drank).

The jazz festival is over, the Fringe has yet to begin. In the week between the two, what do you do with the garden – bars included – and venues of George Square Gardens? You run the free  Edinburgh Food Festival. Food is around £5, drinks around £3-4.

Run by Assembly, Edinburgh Food Festival invites Scottish producers and local food vendors to showcase their wares. There’s cake companies, vegan and carnivore foods, drinks and specialist products such as kambucha and honey. This year Slow Food had a tent where they ran demonstrations. There are also a number of events, from talks to dinners, to entertain and enlighten. It attracts foodies as well as a lot of people drifting through the area.

I’m more interested in food than demonstrations, so that’s what I focussed on. I watched Neil Forbes cook for Slow Food Scotland, from the back of the audience. I didn’t not fight anyone for a seat or scramble for samples at the end. 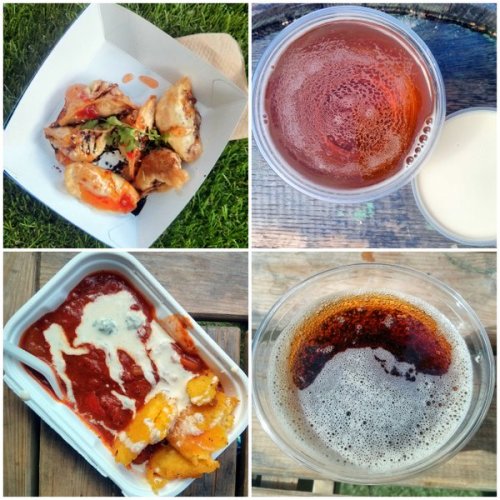 Brewlab‘s a favourite of mine. I had a Nitro cold brewed coffee as well as a cascara – a carbonated drink made from coffee cherries, sweetened with dried apricots and balanced with hops. It’s deliciously adult, tasty stuff with naturally occurring caffeeine.

Finally, I’ve tried Alplings‘s crispy polenta and pepper goulash. It was just as flavoursome and soothing as I’d imagined it would be.

Vegan Sauvage made C. happy with tempura vegetables. It came with an intensely savoury soya jam that was lovely. I considered the buckwheat pasta but passed.

Fyne Ales‘s Ghost Stout was hoppy and smooth, less sweet than I’ve come to expect stouts to be (not a bad thing). The Helle lager packed a big hop-punch.

Foodies Festival is an event that continues to grow. It started 10 years ago in Edinburgh and is now all over the country. It wants to celebrate local food and chefs, and be a good day out. Tickets range from £10-16, food around £5-7, drinks around the same.

There are tents for cookery and baking demonstrations as well as drink tastings. A host of producers, drink and food vans from all over the UK join in the fun. The VIP ticket that includes a glass of prosecco and a goody bag. (Some people didn’t leave the VIP area all day, paying for their own bubbles and eschewing the throngs.) The tents are populated by names: Jacqueline O’Donnel, Paul Wedgewood, Neil Forbes, Ardeep Singh Kholi, to mention a few. 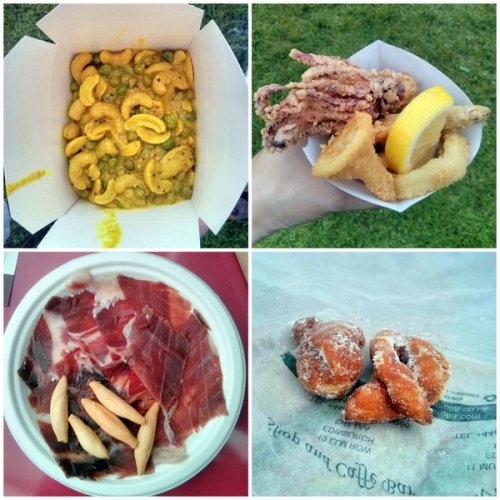 I broke my fast with frito misto from iCalamari, a London-based outift; C. countered with a cashew and pea Malasian curry from Ayubowan, which we’ll try to make at home. Both were lovely; mine had tentacles and tentacles always win.

The Rioja Tapas Fantasticas stand was large and tempting. I enjoyed great jamom iberico with a characterful white, C. had fresh Manchego with a glass of Marques de Caceres Temperanillo, a soft, fruity red. The tapas were provided by Tozino.

The tatty on a stick was popular: a spirally sliced and deep-fried potato. We didn’t try that. Instead, we had Himachal Indian cider. It was intensely apple-y, dry without being sour, lightly sparkling. It’d be great with spicy food.

To add even more sparkle to the day, we had Eden Mill gin. I recently met the gin and was keen to introduce C. to it. Eden Mill original is citrussy and fresh. It works well with Fentiman’s tonic. I had Eden Mill Love, a rose-flavoured gin with Fentiman’s rose lemaonade. The gin’s rosy omph dials up the lemonade’s flower flavour. This combo was both our favourite.

I finished the day, and myself, with a mixed grill from Bristol’s Flamin’ Rooster. I ate the two slaws, the pork belly, the lamb chop, most of the chicken wing and a lot of the chicken breast. The cous cous didn’t get a look-in. C. had a fried avocado taco from Newcastle’s The Sweet Beet. It was delish and much better for you than my pound of flesh.

If you want to eat and drink a lot, and try a wide variety of things, budget not a factor, Foodies Festival is your thing.

If you don’t want to buy a ticket, Edinburgh Food Festival delivers. It also takes you to the part of town where the festival’s revving up.

If you’re a dedicated foody, or a little obsessed, go to both. Both offer talks, food and drink: Foodies pumps up the volume, Food Festival focusses on the local.