I have a few obsessions in my life – good food and wine and a weekly dose of some form of culture.  It’s even better when the two can be combined and my first world problem is  normally debating where to eat that’s good value before the theatre, cinema or gallery and the chance to catch up with my fellow culture vultures. Patisserie Valerie provided the answer. 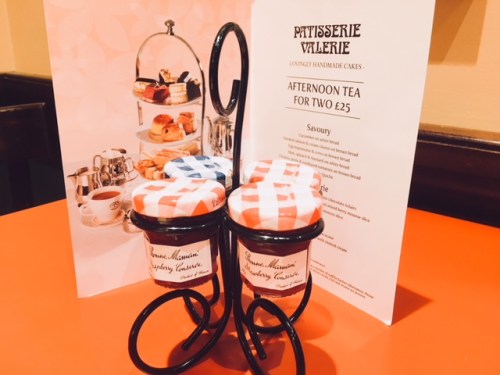 A couple of Fridays ago, I had tickets booked for the ‘Play That Went Wrong’ so was looking for somewhere to refuel near the Festival Theatre, as there’s nothing worse than rushing. I normally opt for supper and have some firm favourites around there: Ting Thai Caravan, Saboteur, Roti and Beirut but on this occasion, I took up the invitation of Patisserie Valerie to visit for afternoon tea.

I don’t have an overly sweet tooth so I normally find this option an overload of sugar and long for one with more savoury options.   However, Patisserie Valerie had got the balance just right.

With three venues in Edinburgh, I chose the one on North Bridge, being a short walk from the Festival Theatre. The enormous display of cakes (and ooh those beautiful, delicate French macaroons) adorning their window are enough to entice anyone in. 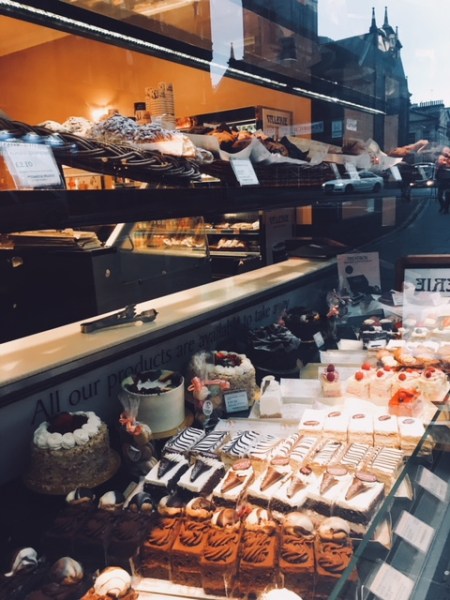 Patisserie Valerie – cakes that will entice you past the threshold

Kimberley, our waitress was really helpful, offering to change anything if it wasn’t to our taste.  In fact all the staff here know how to offer great customer service, greeting us with big smiles and a cheery welcome.

I’ve long been a fan of Patisserie Valerie, having worked near the one in Old Compton Street many years ago. The original one opened on Frith Street in London’s Soho in 1926 by Belgian born Madam Valerie.  She came to London on a mission to introduce fine Continental Patisserie to the English.  It was an instant success but the bombing of the Frith Street premises during the Second World War, subsequently meant a move around the corner to Old Compton Street, where her legacy continues to this day. Roll forward to 2018 and there are now over 150 Patisserie Valerie stores UK-wide and 13 in Scotland alone, with three in Edinburgh.

An afternoon tea of three acts

There’s three elements to Patisserie’s afternoon tea for two:  delicate, finger sandwiches on white and brown bread with the crusts off; a plate of gorgeous patisserie; and bite-size scones, fruit and plain, served with lashings of clotted cream and Bon Maman preserves. 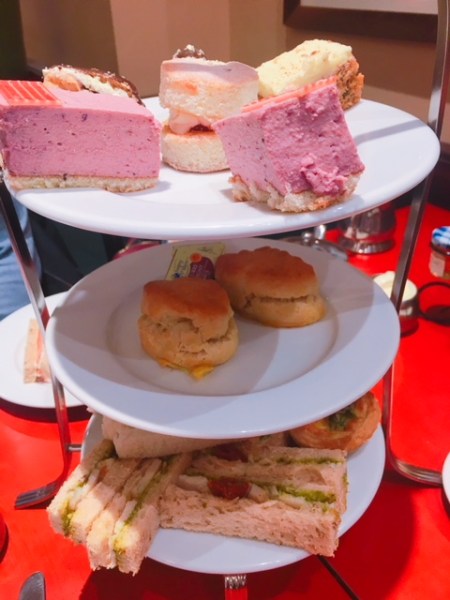 An afternoon tea in three acts, Patisserie Valerie’s tea will satisfy the savoury and sweet lovers among you

For the sandwiches, there’s a selection of five choices and a mini vegetable quiche so my savoury preference was definitely well and truly met. With my allergy to smoked salmon, I greedily asked for another chicken, pesto, and sunblazed tomato on brown bread as a replacement, which I knew would be my favourite, along with the mini vegetable quiche, a moreish, warm, bite-size delectation of pure joy. The ham, baby spinach and mustard on white bread packs a punch, as the mustard is quite hot.  I rather liked this but it tickled my friend’s sinuses and not in a good way. 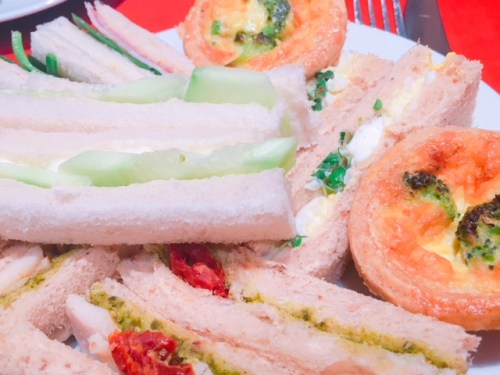 Crusts off – The perfect, delicate sandwich fingers are served at Patisserie Valerie

Scone-gate. Cornish or Devon? Which are you?

Then on to the scones, which are once again the perfect size – not too big.   I didn’t need two so opted for just one fruit scone and my friend went for plain.

We then debated the common argument of jam on first, followed by cream – the Cornish way or vica versa.  It appears we’re both agreed on this and in good company, as this is how the Queen prefers hers too. Thankfully it didn’t fuel the recent outrage caused by the Cornish National Trust, who advertised a Mother’s Day afternoon tea at Lanhydrock House and Garden, but used a picture of a Devon one, where clotted cream is traditionally put on first, followed by the jam. 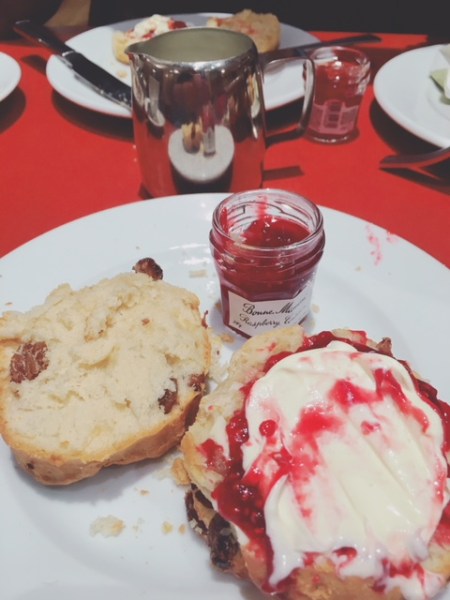 Sconegate – Which way do you spread your clotted cream? Cornish or Devon?

On offer for the patisserie selection was 1 x mini Victoria sandwich, 2 x mini chocolate eclairs, and 1 x mini carrot and walnut cake slice, which even as a non-cake lover (it’s the texture), declared this ‘rather amazing’. 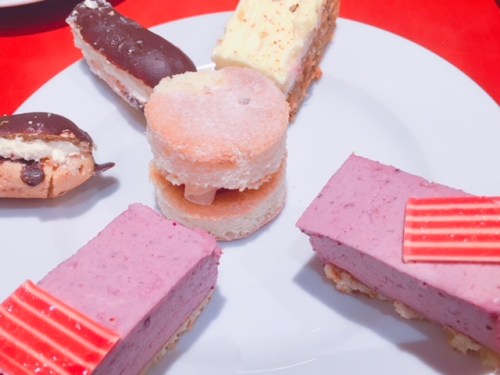 I think they may have sold out of the mini-double chocolate mousse slice, as they gave us 2 x mini berry mousse slices instead where there should have been one of each but they completely redeemed themselves by bringing us four of their pastel-coloured macaroons, which are my ultimate favourite. Anybody who brings me these will always be a winner in my books. 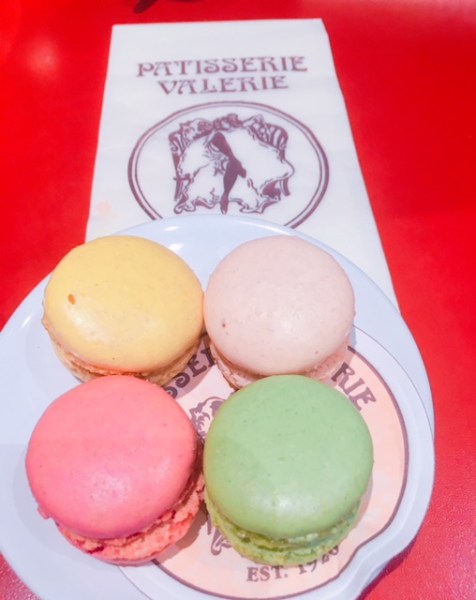 Anyone who serves me French macaroons will always be a winner

All this was washed down by bottomless pots of tea, (which they’ll refill if required) served in retro stainless tea pots and if you’re not a fan of traditional tea (which I’m not, despite my grandfather being a tea-planter), there’s also a range of fruit teas, coffees or hot chocolate. My Mango Tango tea smelt as good as it tasted, oozing zingy mango flavours.

Patisserie Valerie’s afternoon tea is great value at £25 for two and is the perfect pre-theatre stop. And if you’re worried that you won’t be able to eat it all, they’ll package it up in a beautiful box, which you can always eat in the interval too!

Kerry was a guest of Patisserie Valerie